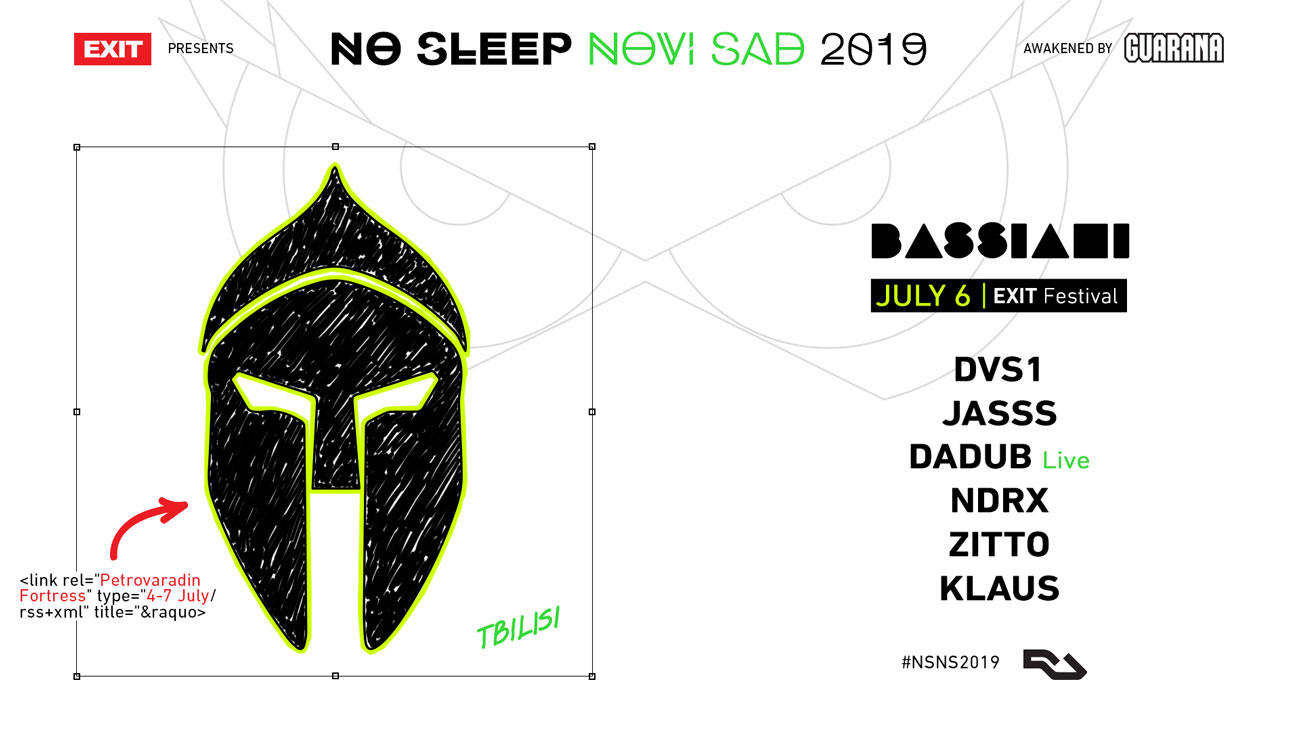 In the past couple of years, the club hailing from Tbilisi, has become a true global phenomenon thanks to the uncompromising curation and the unique background story. Known for their activism and constant struggle against the more conservative forces around it, Bassiani’s overall ethos and mission managed to gather tens of thousands peaceful protesters in front of the Georgian parliament last year. After a very violent raid took place in the club, within hours the whole clubbing community spontaneously assembled into what has also turned out to be the biggest protest party the world has ever seen! This impressive sight was major news all around the globe and the club, already described by many international media outlets as one of the best on the scene, entered a completely new era that takes them to the festival whose roots have been quite similar to the massive student protest in 2000 out of which EXIT was born.

Bassiani’s showcase at the Serbian festival juggernaut is scheduled for Saturday, July 6, and the lineup is led by their resident and one of the world’s most revered underground heroes, Zak Khutoretsky, the US artist born in St. Petersburg, better known as DVS1! Also playing beneath the banner of a Georgian knight will be the Spanish DJ JASSS, the Italian duo Dadub and some of Tbilisi’s best international art exports, Bassiani’s residents NDRX and Zitto. EXIT’s own resident Klaus will make an intro to this techno holiday at the Petrovaradin fortress.

The main name on that Saturday night in the famous moat of the Petrovaradin Fortress will be DVS1, who built a sturdy reputation of an all-round artist over the years, with contagious energy and raw power demonstrated at his mixer. With his first releases for Klockworks and Transmat he opened the door towards a wider audience and created not one, but two labels of his own, HUSH and Mistress Recordings, all the while defending underground values with a collection of over 30,000 records!

Continuing the trend of versatile names at this year’s No Sleep Novi Sad Stage is JASSS who, ever since she was a child, was surrounded by jazz, African and South American influences, and later by punk and hardcore, developing a unique sound with the wish to better understand the relationship between music and people. In only a couple of years, this DJ and producer became a sought-after name in the club scene circles, which she reinforced with her excellent debut album “Weightless” which, as much as her live sets, shows her fearlessness.

A never before seen mix of audio design and bass and dub music heritage will be brought to us by the Dadub duo consisting of Daniele Antezza and Marco Donnarumma. Aside from the EP release “Rituals of Resistance” for Bassiani and a collaboration on the “In Silent” project which also contains names such as SNTS, they also released a limited series of vinyl records for Holoton this year. Inspired by science fiction and the palpable force of low frequencies, this duo developed their own genre named “post-apocalyptic du”” which is best experienced live and will most-certainly echo powerfully among the walls of the fortress at EXIT.

Ambiental, experimental music, electro, drum’n’bass and techno – all these are genres conquered by the Georgian artist NDRX. This Bassiani club resident, during his decade-spanning career developed an eclectic approach which he selflessly directed towards projects such as “Stare At DJ” which he founded and with the help of which he contributed to the development of the Georgian techno scene for many years.

His comrade from the famous Bassiani, Levan Tsertsvadze, better known as Zitto, will also be arriving with the title of the resident of this club, and he will present a characteristic soundscape inspired by hypnotic techno and the Detroit sound which are emphasized thanks to his infallible DJ and production talents, responsible for launching him to the list of the best DJs in 2015, according to Electronauts.

The strength of the local scene will once again be proven by No Sleep’s resident Klaus, known for his hypnotic sets in Serbia’s best techno clubs such as Tunnel in Novi Sad or Drugstore in Belgrade.

Don’t forget that EXIT’s favorite group offer is back: friends who buy four tickets together receive one ticket as a present! The “4+1” offer will last until a very limited number of packages are sold out! EXIT tickets are available at exitfest.org, and for those who wish to bundle them with accommodation and local transfer, there are also packages starting at €145. Default accommodation is the festival camp located on the city beach, while hotels can be booked through EXIT’s official tourist agency at exittrip.org.

No Sleep ’till Belgrade: Amelie Lens leads the bill of the EXIT’s No Sleep Festival!