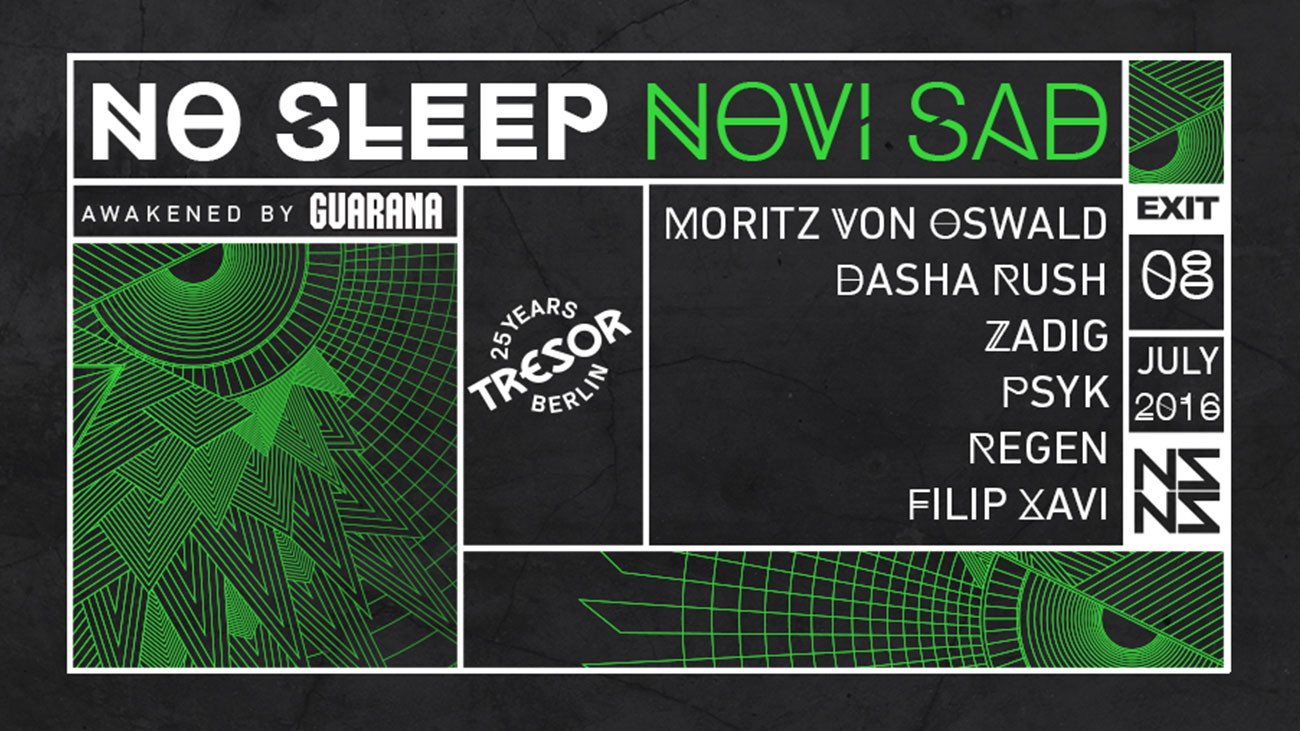 The legendary Exit Festival stage that promotes independent electronic music and contemporary culture, No Sleep Novi Sadwill welcome Berlin’s leading techno institution Tresor on Friday, 8 July. The tour celebrating a quarter of a century for one of Europe’s leading clubs and an extremely influential record label, after Amsterdam, London, Detroit, and Sydney, is arriving to the Petrovaradin Fortress. The lineup will be led by the icon of electronic music and founder of Berlin’s contemporary soundMortiz van Oswald, joined by the leaders of the new European techno scene Zadig, Dasha Rush and Psyk! The local scene will be represented by the producers who have performed at Tresor – Belgrade’s iconic producer, living and working in Berlin, Miloš Pavlović better known as Regen, as well as Belgrade’s new favourite and club Drugstore’s resident DJ, Filip Xavi.

The undisputed champion composer of the electronic avantgarde – Moritz van Oswald, has always been at the very top of contemporary world music innovations. Descending from the noble line of Bismarck, Von Oswald is a percussionist with a background in classical tradition, who early on started exploring the immense possibilities of the then new electronic genre. Bridging over the pioneering techno scenes in Detroit and Berlin which nurtured this sound, it was Von Oswald who pioneered Berlin’s contemporary sound, label and the club Tresor. He has founded some of the most prominent acts in the history of contemporary art: Basic Channel, Maurizio, Rhythm and Sound, as well as the famous Moritz van Oswald Trio, where he was accompanied by Tony Allen and Max Loberbauer. Together with Juan Atkins he also created Borderland, duo which recently released a new album, recognized by critics as one of this year’s best releases. Inspiring many and setting standards with his transformative sound, he characterizes his work as a special fusion of minimal and dub-techno. His partnership with Carl Craig on re-imagining the classical works of Ravel and Mussorgsky, as well as collaborations with renowned jazz trumpet Norwegian Nills Petter Movaerom speak volumes about the extent of Moritz’s love for music.

EXIT will also host the iconic Russian producer Dasha Rush, one of the most intriguing personas from the contemporary techno scene. Famous for her record label “Fullpanda”, she is also known for her authentic sound and the rare ability to erase boarders between genres and countless styles of electronic music. Today, her name synonymous with leading electronic events such as the Parisian Weather, Mexico’s Mutek, or Berlin’s Atonal, while her latest album “Sleepstep – Sonar Poems for My Sleepless Friends” brought the undivided attention of the entire musical community, and her two DJ mix releases “Intense Vertical” and “Sleepless Horizontal” will perfectly fit the wide spectrum of sounds that will feature at No Sleep Novi Sad Stageon Friday, 8 July.

One of the leading names from the neo-Parisian scene, Zadig is among the most credited artists for “The City of Light” returning to the map of contemporary techno music. His first release titled “Vision” opened doors to numerous labels, among which was Technasia’s renowned Sino, that exposed Zadig’s talent to the world. His Construct Re:Form label emerged in 2011, along with the residency at the Rex club, where through promotions and collaborations with new exciting figures such as Antigone, Voiski, Birth of Frequency he strengthened the new Parisian scene. Today, Zadig is frequently playing clubs like Tresor and Concrete, as well as the popular Parisian Weather Festival.

Arriving from Madrid with an exquisite attitude, Psyk stands for one of the most talented producers that have emerged in the last several years. His tracks found place among the greatest electronic record labels such are Minus (before he even turned 19!), Drumcode, CLR and Mote-Evolver, which inspired legendary artists Oscar Mulero and Robert Hood to name Psyk as the most interesting techno producer today. Talent and hard work brought him success with releases such as “Lowdown” and “Eclipse”, as well as “Arcade” which reached the top of Resident Advisor’s prestigious chart! Nowadays, Psyk’s furios sets can be heard at the major European clubs Fabric, Tresor and Concrete. His most extensive world tour yet awaits Psyk this summer, leading him to the very top of today’s techno scene.