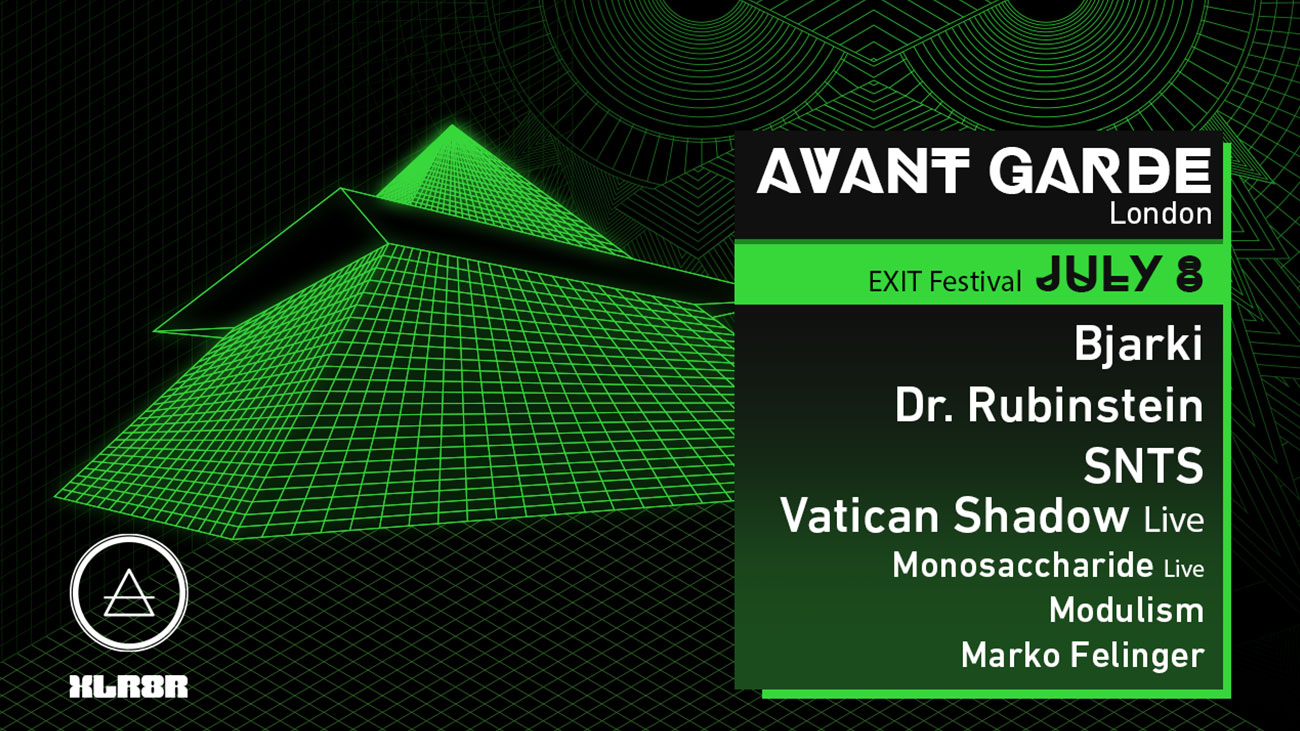 Two out of five nights at Exit Festival’s venerated No Sleep Novi Sad (#NSNS) stage, have already come out with their trump cards, but London’s acclaimed promoter and one of this year’s program partners, Avant Garde, decided to follow and raise the stakes! For the five nights in the deep trench of the Petrovaradin Fortress in northern Serbia, other stage partners like Brussel’s Fuse (July 7) and Parisian Concrete (July 9) have already announced Function, Dax J, Charlotte de Witte, Pierre, Voiski, Antigone, Francois X, Leo Pol and many others. Now, in the spirit of the true musical avant-garde, on Saturday, July 8, we are looking forward to seven excellent techno sets by Bjarki, Vatican Shadow, SNTS, Dr. Rubinstein, Monosaccharide, Modulism and Marko Felinger! The complex show, prepared especially for EXIT in extreme secrecy by the Icelandic banger Bjarki, will be quite peculiar! Unless you’ve been living under a rock, Bjarki’s recent performances have been – to say the least – out there. Between dancing cyclops and jumping aliens, you can see why EXIT Festival is extremely excited to announce what will undoubtedly be a memorable show. A part of something that will flood YouTube on that very morning! Ahead of the epic rave event, Bjarki briefly states: “Exit, there will be no compromise”.

As if this was not enough to tattoo the date on your forehead, on the same bill and stage comes the noise icon himself – Vatican Shadow! This is an exceptional “live” techno project by American multimedia artist Dominic Fernow, known to the music connoisseurs as Prurient! The most destructive weapon of the Berlin-based Berghain family has just released his new maxi single “Rubbish of the Floodwaters” for Ostgut Ton, whose cover art, as an open protest against the recent war in Syria, features Christian Vagt’s photos of the refugee camp in Thessaloniki. Also from Berlin, a new sensation is coming to EXIT, talked about not only in the global techno capital, but at all leading festivals this year – Dr. Rubinstein! For the morning sun at the fortress, the Tel Aviv-born doctor with Russian/Israeli origin prescribed an intensive acid-hypnosis modeled on her lauded sets who made her explode at the international scene, including the invitation by Marcel Dettmann to perform together at this year’s Sonar!

After two extremely powerful closing sets have already been announced, with furious Dax J performing on Friday from 6 to 8 am, and Antigone and Francois X spinning the last three hours together on Sunday, another heavy closing set is coming to the fortress: dark techno prince SNTS will close this already epic night at EXIT! Masked mystic from Berlin is coming shrouded in secrecy with a two-hour hybrid set and music that will only be heard at this special morning gathering! Another special and completely analogue live performance consisting of inexhaustible recent studio production will be brought to us by the uprising Belgrade duo Monosaccharide. Their first album was published by Exit Music label, and the new material that they collected during the past year is enough for at least three more! The honor to start off the night before them is given to Ben Prince, the founder of Avant Garde club brand, who will perform under his dark alias, Modulism. The DJ booth will be switched on by the prominent figure from the neighbouring Croatian scene, Marko Felinger.

This year’s No Sleep parties in London, Brussels and Glasgow!

EXIT’s No Sleep Novi Sad stage has a concept of having world-known clubs each night at the acclaimed Serbian festival! Previous years #NSNS stage had showcases by Tresor, Nitsa, Concrete, Grelle Forelle, Drugstore and 20/44, this year has Glasgow’s Sub Club, Brussels’s Fuse, London’s Avant Garde and Parisian Concrete. Each year, No Sleep launch events take place in many of these clubs, and sfter Belgrade, Barcelona and Vienna, this year No Sleep events were held in Brussels and Glasgow. Charlotte de Witte and Fuse hosted Rebekah and our Tijana T on April 28, while Harri & Domenic hosted Honey Dijon at Exit’s launch party at Sub Club last Saturday! Coming up next on June 2 is No Sleep London party promoted by the Avant Garde & Exit Festival at the legendary Corsica Studios featuring Fort Romeau, Jenifer Cardini and Man Power behind the decks! No Sleep stage will have its seaside premiere this year at the Exit’s sister Sea Dance festival, where, among others, confirmed are Berghain residents Etapp Kyle and Kobosil, as well as Amelie Lens, Space Dimensions Controller, South London Ordnance, Filip Xavi, Insolate, TKNO and others!

Exit’s 15th birthday celebrated by 190.000 people – the adventure moves on to Sea Dance!