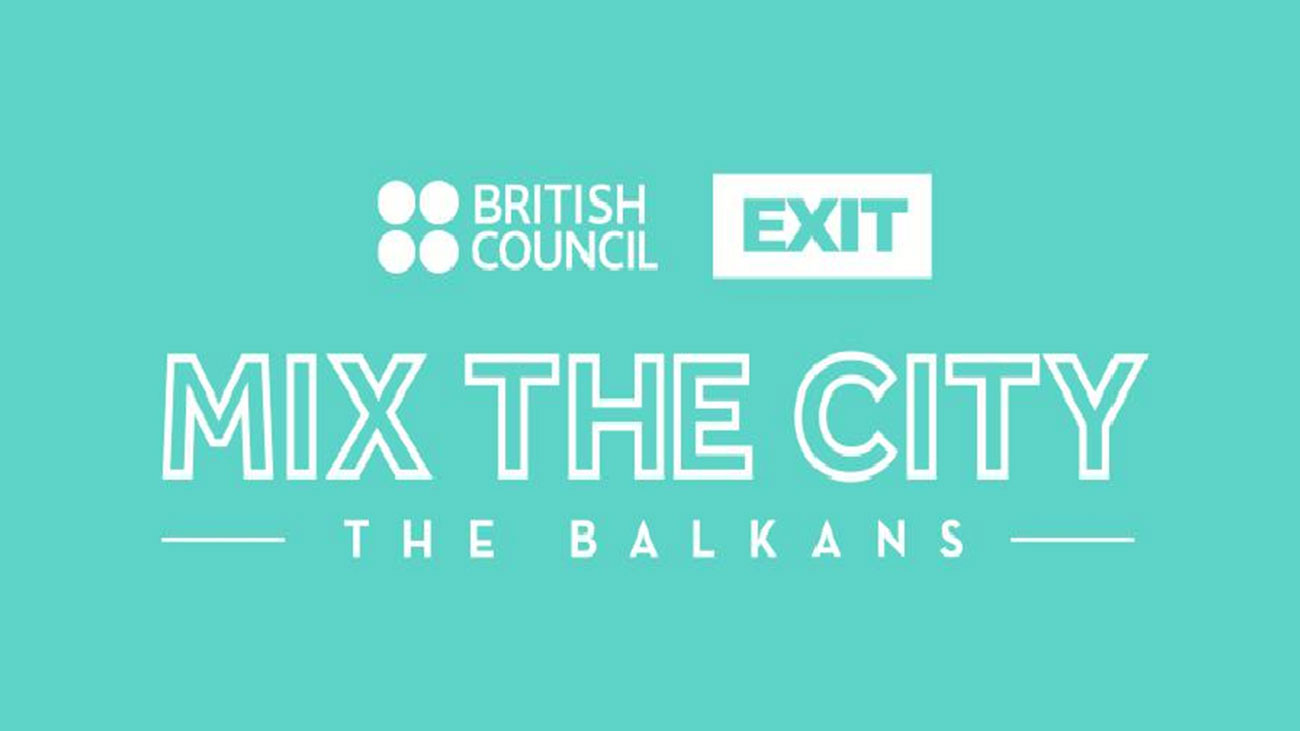 British Council and EXIT Festival have teamed up to bring together Ghostpoet, a UK based recording artist and 12 local musicians from across the Balkans to create a unique musical experience that will tell an unexpected story of the region, encourage people-to-people conversations and reinforce friendly relations. This initiative, titled ‘Mix the City – the Balkans’, invites the world to an interactive music video platform where anyone with a computer or a mobile device can create their own music video mix of the Balkans and instantly share it with friends on social media.

Over the next few weeks, Ghostpoet will go searching for well established and emerging artists that will through their own music tell a story of how they see the Balkans, its cities, people and culture. This will be an exciting journey through Banja Luka, Belgrade, Budva, Novi Sad, Pristina, Sarajevo, Skopje and Tirana. During the tour, Ghostpoet will record samples with 12 local musicians and film footage that shows progressive talent, richness and diversity of the region. The filming locations in the eight cities will be chosen by local musicians themselves and will help Ghostpoet and ‘Mix the City’ users discover some of the hidden gems that make the Balkans truly special.

Once ‘Mix the City – the Balkans’ is launched, audiences across the world will be able to easily explore and experience the sights and sounds of the Balkans at their fingertips. By mixing recorded audio samples of the 12 artists that might have never even seen each other before, every user will have to use his/her own creativity to bring the eight cities closer together. The end result of every interaction with the platform will be a unique mix in form of a shareable music video clip that combines user-generated audio mix with footage of performing artists and authentic landscapes of the Balkans.

‘In my research I was fascinated and blown away by the diverse array of talent in the Balkans. I’m really looking forward to getting this project off the ground and capturing the essence of the areas I visit,’ said Ghostpoet before departing to his first recording location in the Balkans.

‘Mix the City – the Balkans’ will be available to global audiences at Mixthecity.com from July 2016. In the meantime, at the same online location, users can explore end experience Tel Aviv and Istanbul mixes curated by Israeli YouTube sensation Kutiman.

Following the great successes of ‘Mix the City’ in Tel Aviv and Istanbul, ‘Mix the City – the Balkans’ is produced by the British Council and EXIT Festival. The project is realised in collaboration with British creative agency Flying Object and Israeli artist Kutiman that initiated the whole ‘Mix the City’ concept.

Obaro Ejimiwe is a British recording artist better known by his stage name Ghostpoet. His first album, Peanut Butter Blues & Melancholy Jam, was shortlisted for the 2011 Mercury music Prize. He followed his early success with the critically acclaimed Some Say I So I Say Light in 2013 and more recently, Shedding Skin in 2015, which also received Mercury Prize recognition. A diverse range of influences and a fondness for the experimental build the foundations for his dark, abstract musical compositions. His songwriting tackles a range of complex emotions and difficult social themes with refreshing honesty and lyrical dexterity. More information can be found at Ghostpoet.co.uk

Who is behind ‘Mix the City – the Balkans’?

British Council creates international opportunities for the people of the UK and other countries and builds trust between them worldwide. They work in over 100 countries bringing international opportunity to life every day. Each year the British Council works with millions of people, connecting them with the United Kingdom, sharing cultures and the UK’s most attractive assets: English, the Arts, education and British ways of living and organising society. British Council has more than 75 years’ experience of doing this in the Balkans. More information can be found at Britishcouncil.org

EXIT festival is so much more than just a summer music festival. It’s more than the line-up and the stages. EXIT is made up of its people – the festival was founded in 2000 as a student movement, so as to fight for freedom and democracy in Serbia. It was the first place youth gathered at from all former Yugoslav republics after a decade of wars. Now, its uniqueness lies in its mind-blowing location, artistic diversity, and local flavour. EXIT Festival (7–10 July 2016), combined with its seaside sister Sea Dance Festival (14–16 July 2016), makes for a world’s most unique festival package EXIT Magic Adventure, connecting young people from Balkans, but also festival fans from more than sixty countries from all over the world.

Flying Object, digital content partner on Mix the City, are a London-based creative agency who specialise in developing engaging experiences using the tools of the web. Core to their work is a belief that technology alone can’t cut through the noise; that to succeed online requires innovative ideas, executed well across video, social, interactive and beyond. Launched in September 2013, projects to date have included the School of YouTube for Comic Relief and Bar Coder for Google. More information can be found at Weareflyingobject.com

Roll Studio, technical development partner, is a creative digital agency based in London and Avellino, Italy, specialising in design, development and digital services. They have over 10 years’ experience in creating and programming some of the most innovative experiences on the internet. Helping brands embrace the ever changing digital landscape and having some fun along the way, more information can be found at Rollstudio.co.uk

Take me to the after-party: Official EXIT after-parties!