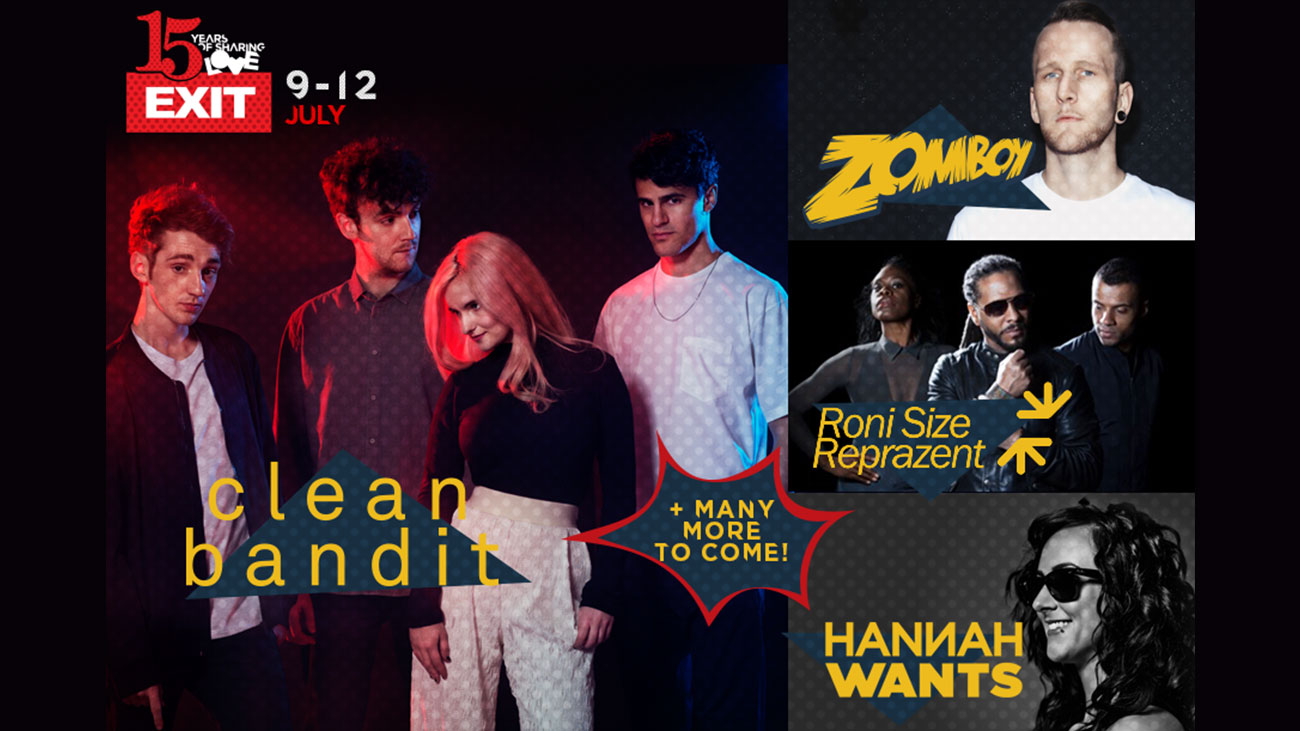 Authors of the officially biggest European hit last year, Clean Bandit are set to perform at the Main Stage of Exit Festival on 9th July! Their summer anthem “Rather Be”, which just won them Grammy for Best Dance Recording, officially stands as the most streamed song in 2014, leaving behind even Pharrell’s “Happy”! Roni Size, one of the festival’s “musical founders”, will mark the eve of Exit’s 15th anniversary at the Petrovaradin Fortress on the same date. The drum’n’bass icon will perform live with the Reprazent supergroup and open the list of the X-bass performers this year, made by Exit in collaboration with the global music brand UKF. The new dubstep big shot Zomboy on 12th July will continue raising the bar, set high by Skrillex last year. The after-midnight Main Stage program on 11th July will be pumped up by one of the leading dames of bass music – Hannah Wants.

Clean Bandit made their debut with the “A+E” single in 2012, reaching the symbolic 100th spot at the UK singles chart, followed next year by the release “Mozart’s House” that skyrocketed amongst the top 20! The song “Rather Be” catapulted this Cambridge quartet into stardom, and is officially one of the ten biggest global and the biggest European hit last year with video that counts over 220 million views on YouTube! Being among the top 5 most Shazamed songs of all times, adding figures from Spotify, Deezer, Napster and Google Play made it officially the most-streamed song in 2014, in front of Pharrell’s “Happy” and Sam Smith’s “Stay With Me”! This multi-platinum success is attributed to the seductive vocals by Jess Glynne, who also sings on their newest hit single “Real Love” and its video created by fans, who sent the band clips of themselves kissing. Other critically-acclaimed chart breakers from the album “New Eyes” include “Dust Clears”, “Extraordinary” and “Come Over”, which have all become choir-singing baits at the biggest festivals like Glastonbury or Reading. After winning Grammy ahead of favoured Disclosure & Mary J. Blige, Clean Bandit are now looking into the BRIT awards where they are nominated for best British band – competing head to head with Coldplay, proving why they made it to the top of Exit fans’ recent wish list.

It all came together for the festival’s 15th anniversary with one of its trademark symbols and first ambassadors of Exit in the world – the monumental Roni Size! The first night of the festival will be adorned by the recently reunited Reprazent, on the cusp of their new album, the first one after 15 years. These signs are far from coincidental and are more than plenty for a historical event at the fortress. Lead by Roni, the music doyens Dynamite MC, Onalee, Si John, Dave Amso, Jay Vilcox and Danny Cox, will mix creativity once more in one of the most influential electronic groups of all time. Their performance pinged for the fortress is best announced by the album title “Do it for the Masses”!

This year’s X-bass programme continues to reel in the hottest names. After Skrillex, the young producer and DJ Zomboy is the next essential addition to Exit.  Millions of fans on social networks cemented his prodigal status after the debut of “The Outbreak”. This 25-year-old party-maker from England began his overseas invasion by playing from Argentina to Hollywood. Before he blasts the Petrovaradin Fortress with the freshest bass set accompanied by spectacular visual effects, Zomboy sails to a new pan-American raids, warming up for his premiere show at Exit.

With her BBC Radio 1 residency, regular sets at the Amnesia in Ibiza within “Together” club-night by Chase & Status and the planetary dance hit “Rhymes”, Hannah Wants is the leading lady of bass music today. “What Hannah Wants” as her tour title seeks to find out, will be answered on the 11th July, at the traditional X-Bass takeover of Exit’s Main Stage.

Tickets for EXIT, Sea Dance festival, as well as tickets for full EXIT Adventure, combining both Exit and Sea Dance festival are available at Exitfest.org. Plenty of additional packages that include travel and accommodation options can be found at Exittrip.org.