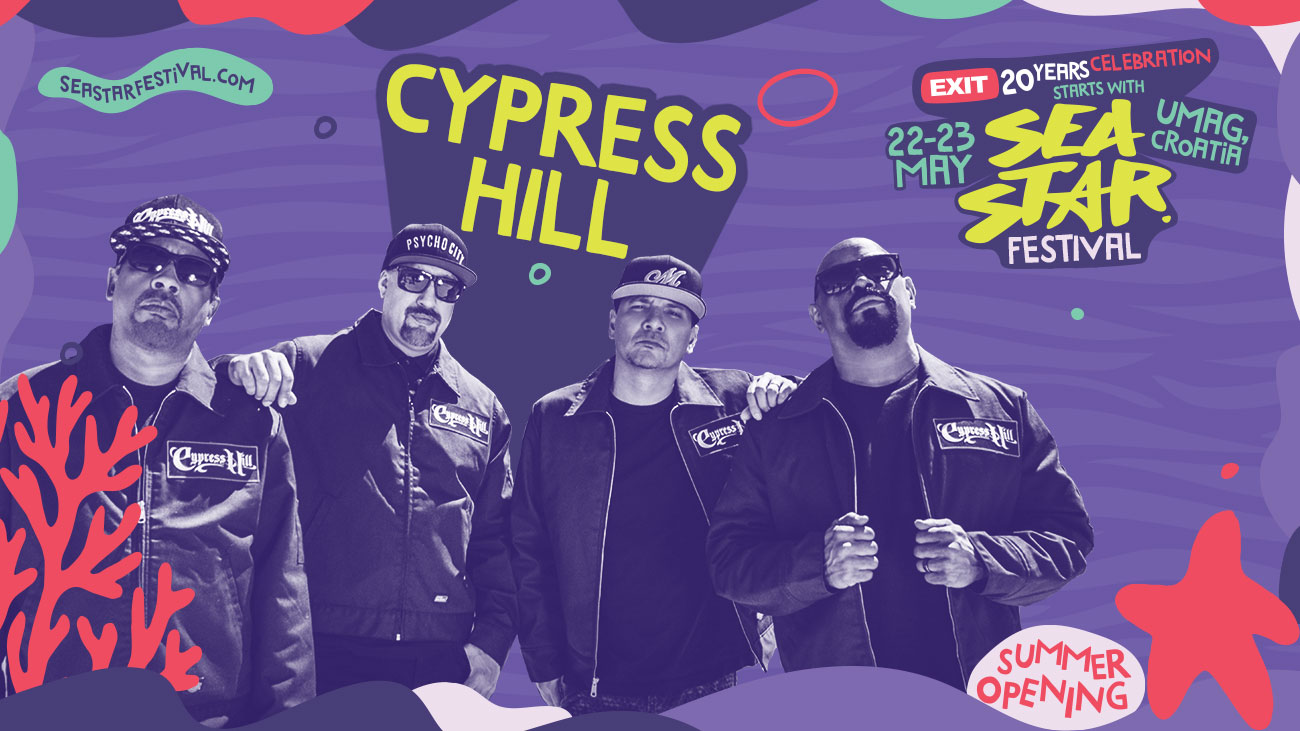 One of the biggest hip-hop groups of all time, Cypress Hill, will lead the bill and they will be joined by Amelie Lens, Umek, Tijana T, Farrago, Meduza, Dubioza Kolektiv, as well as the strong local hip-hop lineup and many more artists to be announced in the weeks ahead!

The Californian rap gods, who have a whopping 20 million albums sold worldwide, will have only two big shows in Europe: one in Iceland, as well as at Sea Star Festival, to which they are coming with their entire five-member lineup.

Credited for hits Insane In The Brain, Tequila Sunrise, Rock/Rap Superstar, Hits From The Bong and I Ain’t Goin ‘Out Like That, Cypress Hill has strongly influenced the global hip- hop scene, and with their outside-the-box thinking have promoted bilingualism since their first album. Indispensable in popular culture, this famous band also received an episode in the cult series The Simpsons, their hits playing in the super-popular Grand Theft Auto game and movies such as The Fast & Furious series, The Sopranos, Mr. Robot, The Wolf of Wall Street, Friday, to name only a few. These visionaries are musical role models to all the great hip-hop and rap groups that came after them.

Cypress Hill left a mark on music history as the originators of the West Coast hip-hop sound, but also as the musical prophets who announced the present day, global rise of Latin rap, three decades ago. Their first single, How I Could Just Kill A Man, was the epitome of hardcore gangsta rap that opened the door to an array of icons such as 2Pac, Snoop Dogg and others. The eccentric sound and unusual sample selection also inspired a new, different, hip-hop wave in the East that would be made famous by the Wu-Tang Clan just a few years later. And so, Cypress Hill has prophetically set the foundations for the hip-hop sound of the ’90s, simultaneously affecting a crossover that blended rock and metal with urban ghetto sounds which mixed races, cultures and influences, making their sound a universal one.

Sea Star – A festival in a Magical Lagoon

Sea Star festival promoted by the team behind globally acclaimed EXIT Festival takes place in a beautiful seaside town of Umag at the mind-blowing Croatian coast. It is set in the Stella Maris resort, in a turquoise-color lagoon with most amazing sunsets. Umag represents a breathtaking combo of baroque and renaissance, and Mediterranean climate, while this entire Istrian region is known of its delicious homemade and gourmet food, olive groves, fields of tomatoes and vineyards. Sea Star Festival is a perfect invitation to initiate summer on a stunning location, with world renowned artists and an outstanding production!

The fourth edition of the Sea Star Festival will be held at the famous Stella Maris lagoon in Umag, on May 22 and 23, with the Welcome Party on May 21 and the closing party on May 24. Tickets for Sea Star festival are available at this link. Accommodation and travel arrangements can be found at Exit’s official travel agency, ExitTrip’s official website.

Exit and Sea Dance festivals launched their after movie with a stunning 360 video!