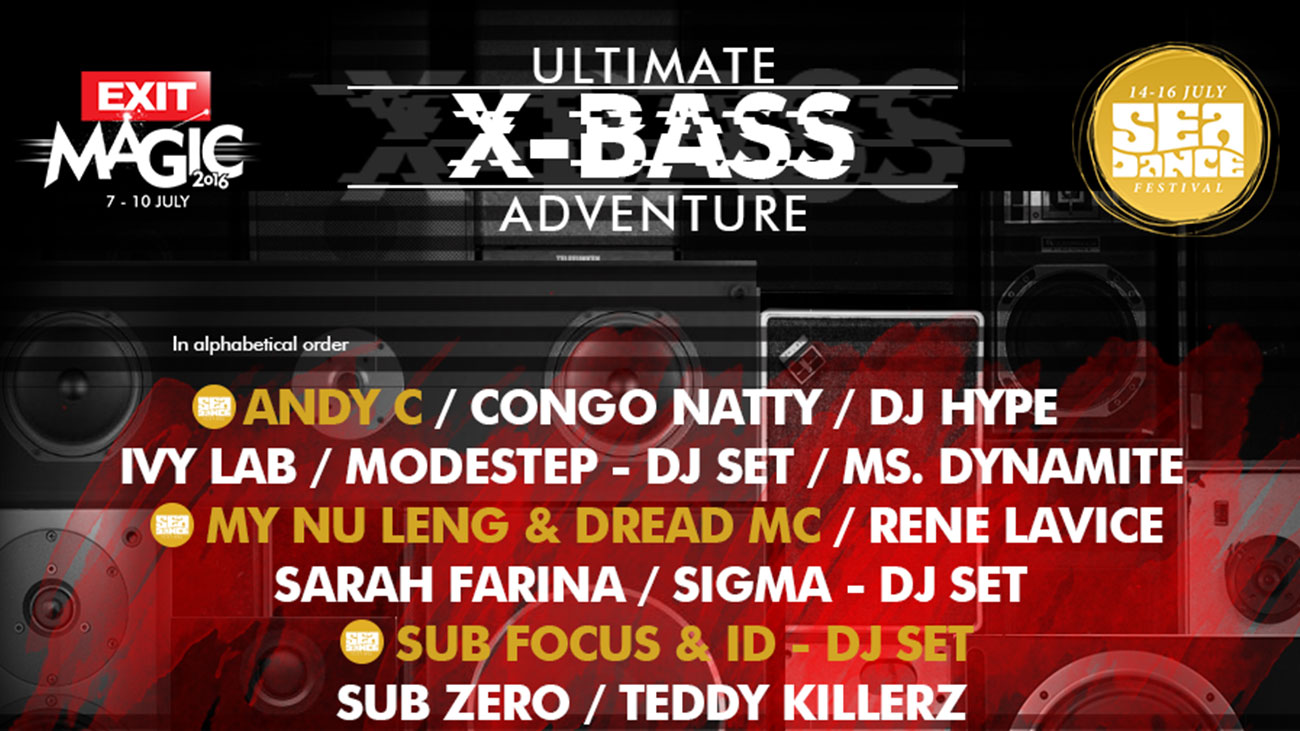 World’s major bass stars have confirmed their presence at the grand Exit Adventure, spanning all the way from Petrovaradin to Jaz! After a groundbreaking performance last year at Sea Dance Festival, Sigma are coming to Exit in glorious fashion! Sigma will also be joined by the jungle-reggae hero Congo Natty, a furious Russian trio Teddy Killerz, Canadian bassmaster Rene LaVice, as well as Sarah Farina, the Berlin rainbow-bass lady! To take the Adventure up to the ultimate boiling point, Sub Focus, alongside MC ID, as well as the famous Bristol duo My Nu Leng, together with Dread MC, are coming to Jaz Beach!

On Thursday, 7 July, the majestic opening of Exit Festival is added another thrilling spectacle, as the British duo Sigma, the authors of the colossal “Nobody to Love” that earned them two BRIT nominations are filling another Main Stage slot. They have collaborated with some of the world’s biggest stars, including Ellie Goulding, Kanye West, Paloma Faith and Kiezsa, whereas at the end of last year they released “Life”, an album which received numerous positive reviews by both fans and the critics. On the second day of Exit Festival, the crowd will be warmed up by the energetic performance delivered by Sarah Farina, coming straight from Berlin, and whose sets perfectly combine heavy bass with a futuristic rhythm protruding the walls of R&B and UK Funk. Sarah describes this style as rainbow-bass. Congo Natty, also known as Rebel MC, London’s jungle pioneer, arrives to the main stage on 8 July, with his utterly recognizable sound – a mix of pop-rap with hip-hop, dance music and reggae. On Saturday, 9 July, the Main Stage magic of sunrise will be kicked off by Canadian drum’n’bass producer Rene LaVice! One of Toronto’s best kept secrets, the most wanted North American DJ attracted the attention of BBC’s music giants, not to mention recognition by one of the biggest, most awarded producers, Andy C, who is also performing at this year’s Exit Adventure, at Sea Dance Festival! With huge support of “175 bpm” elite that includes Sub Focus, Sigma and Andy C, the leader of RAM Records, Rene has become one of the most wanted DJs of bass music. Grigory Cherekaev, Anton Mashevsky and Oleg Cholovskii, also known as Teddy Killerz will also shake up the audience at Exit’s Main Stage on Saturday, 9 July! Known for their diversity, they will present their mix that contains all aspects of drum’n’bass, dubstep, trap and breakbeat. After being recognized worldwide for remixing Skrillex’s “Make It Bun Dem”, they became a part of RAM Records, and remixed numerous tracks, including Skrillex’s “Ragga Bomb” and “Make Those Move” by I Am Legion, consisting of members from Foreign Beggars and Noisia, which were also no.1 on Beatport’s list for six weeks!

Leading dubstep and drum’n’bass producer Sub Focus, together with MC ID, comes to Sea Dance Festival’s main stage on Friday, 15 July, bringing some of the most known hits, such as “Rock It”, “Follow The Light”, “Last jungle” and “Out of The Blue”. Sub Focus has worked together with biggest stars, also remixing some of them – The Prodigy, Deadmau5, Empire of the Sun and Dizzee Rascal, with regular performances at world’s biggest festivals. The same night on Main Stage at Jaz Beach features the famous Bristol duo, My Nu Leng, consisting of bassers Tommy and Jammo, joined by Dread MC on the stage. The fast-paced success on the music scene came with a brilliant skill in fusing together house, garage, and jungle rhythms, with recognizable high-pitched voals combined with drilling heavy bass in the background. With new releases on the way, as well as packed tour schedule with gigs always a ticket short, My Nu Leng, alongside their ever-present Black Butter crew, continue to conquer fans’ hearts and minds all across the world.