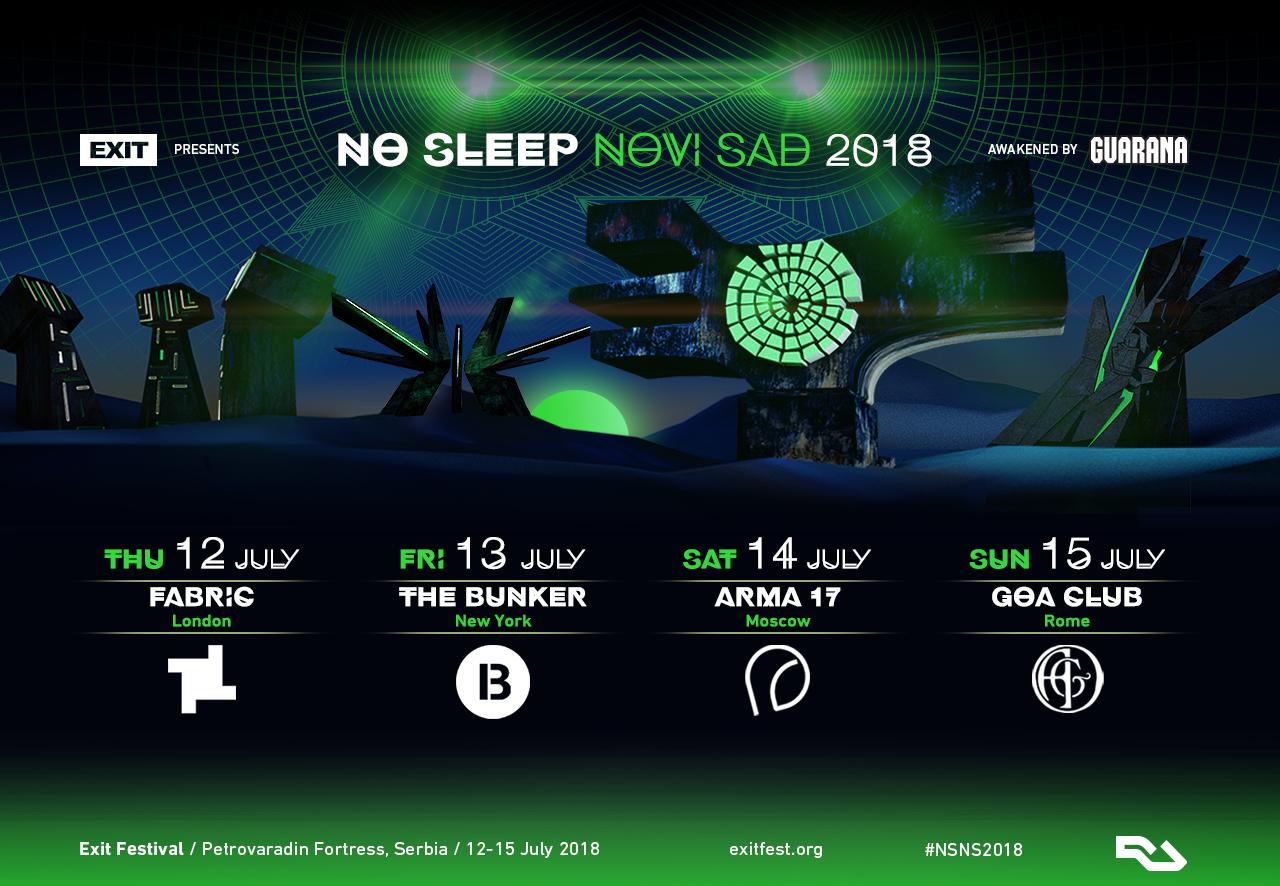 International success of Exit Festival’s iconic stage, No Sleep Novi Sad, can only be characterized as meteoric. On this custom designed and very recognizable stage, EXIT hosted some of the most exciting clubs who have all presented a part of their history and magic in a completely different setting of the colossal Petrovaradin fortress where the acclaimed Serbian festival takes place each summer. With a carefully chosen program, No Sleep Novi Sad hosted some of the Europe’s leading clubs, like the Parisian megaboat Concrete, techno institutions Tresor from Berlin and Fuse from Brussels. Equally rich in history were Barcelona’s jewel Nitsa or the Glaswegian legendary Sub Club. More avant-garde spots joined in as well, such as Vienna’s infamous Grelle Forelle or Salon des Amateurs from Dusseldorf, while UK’s pivotal art point Corsica Studios hosted No Sleep London event with the help from promoters at Avant Garde London. Last but not the least, two local, but very much internationally recognized venues hailed from Belgrade, the popular boat 20/44 and techno cathedrale Drugstore. Partner clubs hosted several No Sleep events from London to Vienna, from Glasgow to Barcelona, from Belgrade to, of course, No Sleep Novi Sad. This year’s program of No Sleep Novi Sad’s stage connects four megacities – New York, Moscow, London and Rome, as Exit Festival will host their own club symbols, London‘s Fabric, New York‘s The Bunker, Moscow‘s Arma 17 and Roman Goa Club!

Founded almost two decades ago, Fabric is a club where all the most important techno, house, and bass artists have played. Today it’s a true music institution of the British capital, the place without which its night life is unthinkable with a whole array of artists originating from it. Named many times as the best British and one of the world’s leading clubs, its three halls, spanning over 2,300m2 (25.000ft) are characterized by a specially adjusted sound, coming from all directions, with basses from the floor sending vibrations throughout the whole body! Fabric is known for its legendary mix albums, almost 200 of them so far, carefuly crafted by the likes of Nina Kraviz, Maceo Plex, Daniel Avery or their famous resident DJs Craig Richards and Terry Francis.

Much like the city itself, New York club scene never sleeps and functions completely different from a European metropolis, preserving the essence of proper underground that originated accross the Atlantic. The Bunker, music collective celebrates 15 years of adamant work as the authentic symbol of New York scene, transforming and conjoining it through hundreds of parties at a dozen locations in the city. Run by Bryan Kasenic, a New Yorker whose origins reach to ex-Yugoslavia and a true visionary behind the greatest techno-collective in New York, that transformed other clubs, galleries, warehouses and many exciting venues into one club on the go. The Bunker New York is also a record label and a home to its fierce jocks like Mike Servito or Eric Couiltier, whose fanatic DJ craft creates an undivided respect from peers and fans alike.

New York and Moscow, seemingly different cities, are pervaded by a very similar and very hearted spirit of exceedingly energetic people. This can be seen in the example of the Russian’s most important art collective, Arma 17. Their story kicks off over a decade ago in an old industrial quarter, from which they took the name of the facility where the openned a club that will soon become home to avant-garde Russo with artistic collectives such is their visual ally “Sila Sveta”. This influx of artists into the clubbing created some of the stunning scenography and gave a strong visual dimension to its already groundbreaking music selection. Arma becomes something like the 21st century Mosselprom, but instead of Mayakovsky you have Redkina, Zabelin, Gorbachev and its co-founder, Natasha Abelle, with numerous other regular performers, such as Nina Kraviz or Helena Hauff. This summer, Arma marks the anniversary of 10, highly turbulent years, which saw it emerge into an international artistic movement, celebrated around the world.

Rome is truly “the eternal city”. Its energy, charged with the living history, is so powerful that it is impossible to remain indifferent to the beauty coming from wherever you turn your eye to. If you are, both officially and unofficially, the most beautiful and the best Roman club for two decades, according to both the media and the greatest stars that eagerly respond to your invitation, then you are Goa Club! The place where Eddie Veder sang impromptu gig and Bono Vox waited in cue, the place where the greatest DJs spin surrounded from all side, at a hand’s reach, by always vibrant Romans. Even though Goa has the custom sound whose craftmenship could be compared to that of the Ferrari, it’s the decor that really puts this unique Roman venue up there with the most beautiful frescoes of the Vatican. Such attention to detail, so carefully thought out in the club whose always shifting theme is currently inspired by the deep jungles of Indonesia, with scenography so faithful that you lose the idea of its size. Goa’s intimacy involves clubbers into sets of its top-notch resident DJs, such as Adiel, DJ Red, Silvie Loto, Fabrizio Sala and the one and only, the most important visionary, the club’s co-founder Giancarlino Battafarano!

No Sleep on tour from Novi Sad to London!

This year, #NSNS2018 promo tour starts in Novi Sad, from the depths of Petrovaradin fortress, where Dasha Redkina, the resident DJ of Arma 17, will perform in the Novi Sad’s infamous club Tunnel on April 13. Next station is on the other side of the ocean, as the Bunker team will be doing the No Sleep New York party on April 28, with Exit’s well-known residents Tijana T and Lag. The tour comes back to Belgrade’s Drugstore on May 11, also with the residents of Moscow’s Arma 17, with No Sleep Rome to follow in Goa Club on May 17. Final weekend begins on May 24 in Moscow and the grand finale is the No Sleep London, set for the British bank holiday on May 26, in both rooms at one of the most famous clubs in the world – Fabric!

The icon of contemporary art Grace Jones to perform at EXIT Festival!

Yoko Ono and EXIT to celebrate “First World Peace” – 100 years since the end of World War I!

Q&A: The exceptional women of EXIT