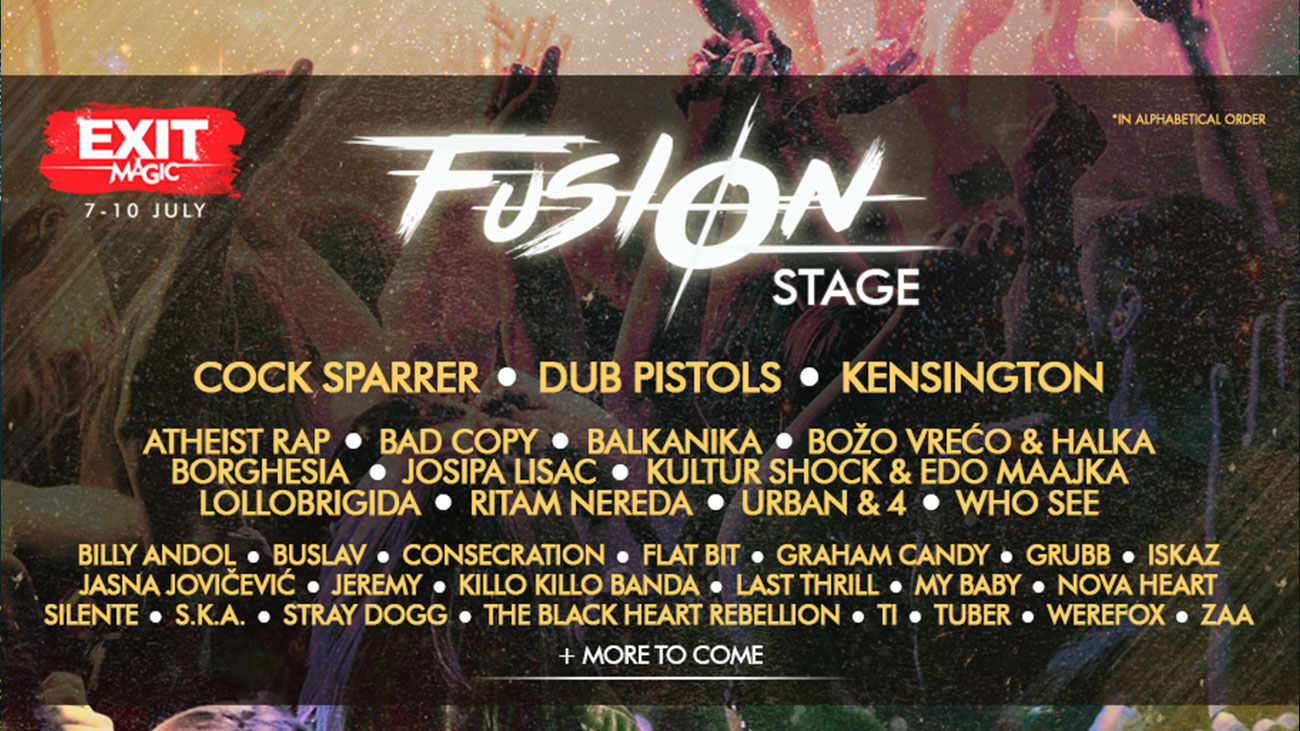 Just like previous years, EXIT Festival’s Fusion Stage will be the meeting ground for local, regional and performers from across the planet. During four days over 40 bands and more than 150 artists will create an amazing atmosphere for the audience at the Petrovaradin Fortress, bringing the recognizable cosmopolitan vibe which symbolizes one of EXIT Festival’s most beloved stages! Cock Sparrer (UK), The Black Heart Rebellion (Bel), My Baby (NL), Dub Pistols (UK), Kensington (NL), Nova Heart (CN), Tuber (GR), as well as local heroes,Josipa Lisac, Urban&4, Stray Dogg, Who See and many more are just some of the names which will introduce the colorful musical world of Exit’s Fusion Stage.

The first festival day at Fusion will be marked by the performance of one of the most charming regional musicians,Urban&4, which will yet again leave their soul at Petrovaradin Fortress, and cause an uproar of emotions among the audience. They will be joined on stage by the band Ti, psychedelic electro-pop duo from Belgrade, whose music is full of dreamy and unforgettable melodies, resembling a sort of fluid poetry carried by their hypnotic beat. The melodic neo-punk tones will be brought by Belgium’s The Black Heart Rebellion, while Holland sends their regards with My Baby, an interesting electronic band which they themselves define as “delta trance, Louisiana dub indie funk”. The cosmopolitan spirit will be represented by China’s Nova Heart, an electro-pop band from Beijing, who shape their music according to the melodies from the 70s and 80s they are inspired by. And finally, the lineup on Thursday is complete by the performance of the local ska-dub sensation ZAA, and their recognizable female vocal Sanja Vučić, who represented Serbia at the Eurovision Song Contest this year.

Serbia’s most popular hip hop trio – Bad Copy will turn the heat up at Fusion Stage with their famous hits on Friday, 8 July. Balkan’s premium punkers, Kultur Shock renowned for their mix of genres, blending rock, metal, punk with traditional Balkan music sharing the stage with the most sought after rap star from the region – Edo Maajka. The ever-popular Balkan Beats will be brought on stage by the singer-songwriter from Bosnia, Božo Vrećo, who will perform with his band Halka. For an unforgettable night at Fusion we can thank Novi Sad’s legendary rock band Ritam Nereda, but also Belgrade’s Consecration, the band who combines psychedelic rock with alternative metal sounds. Holland’s Indie-Rock band Kensington will show why they are considered one of the most popular musicians beyond the borders of their country, while composer and multi-instrumentalist singer-songwriter Buslav is set to arrive from Poland, completing the lineup for Friday.

British dub superstars Dub Pistols and punk veterans Cock Sparrer will on Saturday, 9 July be joined on stage by Novi Sad’s legendary punk-rock band Atheist Rap and Croatian-Slovenian disco punk phenomenon Lollobrigida, who belong to the select-few bands popular all across the Balkans. World music wonder band of global proportions, Balkanika, together with their founder Aleksandar Sanja Ilić, will present their Balkan sound to the international audience at Fusion, while the stage will also host the hip-hop band Iskaz, with their socially and psychologically engaging lyrics, as well as the exciting indie/alternative rock group from Bosnia and Herzegovina,Billy Andol.

One of the most accomplished artists from the region, legendary Josipa Lisac will hold her concert on Sunday, 10 July on at the fabled Fusion Stage during this year’s EXIT Festival! This will also mark the first performance by the region’s foremost diva at EXIT Festival, whose singing force and signature vocal expression have illuminated the scene for four decades, reaching the hearts and minds of countless generations. The atmosphere will be brought to boiling point by Montenegro’s sensational hip-hop duo, Who See, who are set to make a sensational introduction to the Sea Dance Festival with their hit „Đe se kupaš“. The heroes of Belgrade’s Americana scene –Stray Dogg, renowned for their collaboration with Devendra Banhart, will share their melancholic guitar riffs with the audience at Fusion, while the banner of alternative rock will be held high by Slovenia’s Werefox and Bulgaria’sJeremy. Arriving from Croatia that same night is pop-rock band Silente, while world music melodies will be brought by Belgrade’s Grubb, who recently performed the renowned song Đelem, Đelem to Prince Charles and Duchess Camilla. Finally, the instrumental rock band from Greece, Tuber will wow the audience during the last day of the festival.

Join the EXIT fans’ favorite special offer, which allows the entire crew to buy four tickets EXIT or the entire Exit Adventure, and receive a fifth ticket for free! Don’t miss out because the offer is available only until 6 June!

Tickets are available at THIS LINK. You can save up to 60% from the final ticket price in July. Accommodation and travel arrangements can be found at Exit’s official travel agency, ExitTrip’s OFFICIAL WEBSITE

No Sleep Barcelona: the legendary nitsa club arriving at Exit!

Colossal stage spectacle and eruption of positive energy at the second Sea Star Festival in Umag!

Interest is growing by the day: EXIT in August with at least 20 stages and zones!