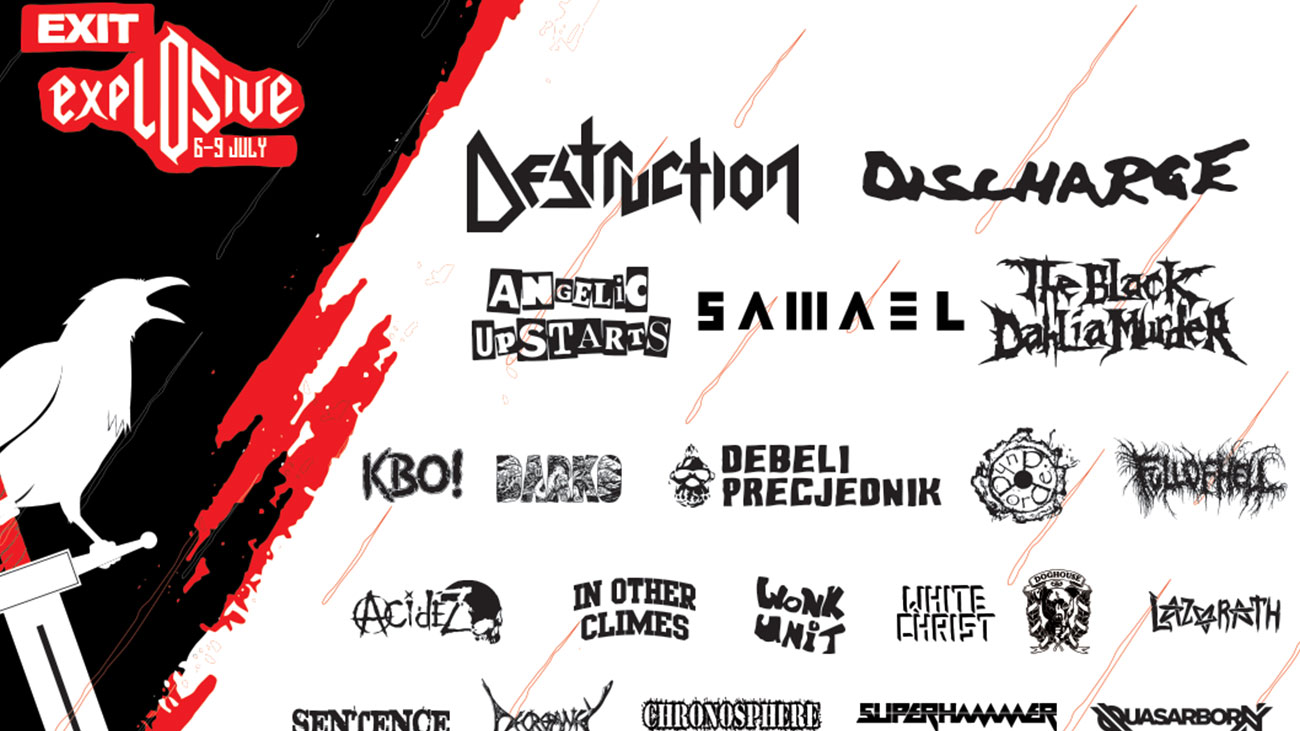 EXIT festival received new, fierce reinforcements for this year’s festival which will be held from July 5 to 9 at Petrovaradin fortress. A mix of melodic and hard sound will resonate from the third-largest festival stage, Fusion, because we will welcome the legendary band The Damned, who will bring with them their distinct punk atmosphere, while the famous EXIT festival stage dedicated to extreme sound, Explosive, will this year again be the epicenter of the earthquake caused by the most recently announced names of metal, punk and hardcore scenes! The furious line-up will be led by the renowned punkers Angelic Upstarts who are coming to Serbia after 32 years! They will be joined by the legends of extreme industrial dark metal scene, Samael from Switzerland. They will headline the explosive program of this stage in addition to the already announced The Black Dahlia Murder, Discharge and Destruction.

This year at Exit, one of the pioneers of the punk scene, the British veterans The Damned will celebrate 40 years of their first album “Damned Damned Damned”, which was also the first released British punk album! Striking vampire looks of their frontman David Vanian, which inspired the birth of gothic fashion, as well as their innovative approach, ensured their place in music history. This year they will release a new album on which fans can expect their familiar sound, but also some new stuff, solidifying their reputation of tireless innovators!

On Thursday at Explosive Stage, alongside the unique Romanian band Dordeduh, who will bring their unique blend of black metal and sounds of Transylvania, you will be able to hear a performance by the band which radically changed the sound of metal and lead it into hitherto unexplored dimensions of experimental freedom. From the very start, Samael boldly walked modern creative paths and created a strong foundation on which many new trends and styles were later built. They will be joined by domestic duo Superhammer.

Franch hardcore metal band In Other Climes will present themselves to the audience on the second night of the festival and demonstrate why their furiously energetic live performances are remembered for a long time! The night will be spiced with punk, because Debeli precjednik, a hardcore punk band rocking the region for the past 22 years, and Belgrade punk rockers Doghouse, who return to EXIT after a couple of years ready for another explosive gig, are also scheduled to appear! Thrash punk band from Novi Sad Lazarath and Zagreb based hardcore group Sentence published an album together late last year, and both will shake the walls around Explosive stage with their fierce sound! The night will be complete with Darko who will for the first time bring their skate punk sound to this part of the world!

The Saturday at the Fortress will be an ultimate punk experience with the legends of this genre, Angelic Upstarts, who always stood out with their anti-fascist attitude and who still dominate the scene thanks to their strong guitar sound. At the same time on the Explosive stage, cult Yugoslavian punkers KBO! will treat the audience with their unique sound characterized by the absence of a bass guitar in the band. British hardcore punk mages Discharge will present their new album as well as older songs, which were covered by such bands as Metallica and Anthrax! Among others who will complete the energetic atmosphere on the third night of the festival are Mexican punk band Acidez, White Christ who will bring its wild and irresistibly energetic version of hardcore punk, increasingly popular British poetic punkers Wonk Unit and domestic oi! Punk band Fiskalni račun!

The most intensive good time for the last night of the festival will be ensured by one of the strongest death metal bands in the past couple of years, The Black Dahlia Murder, as well as the newly announced names which will storm through the Fortress, such as the new wave of thrash metal band Chronosphere, young locals Quasarborn who quickly attracted a lot of attention, and Decrepancy from Jagodina who will give audience a taste of old school death metal! The founders of European thrash metal sound Destruction and Full of Hell youngsters, who brought grindcore back on stage, will complete the furious program of the last night of EXIT festival!

Tickets on sale for the big EXIT Summer of Love 2017!

This year EXIT team will connect four festivals in the region for a unique EXIT Summer of Love 2017. The first is Sea Star, which will be held on May 26 and 27 in the city of Umag, followed by Revolution Festival in Timisoara from 1-3 June, and right after EXIT festival, from July 5 to 9, the fourth edition of Sea Dance festival will be organized, from July 13 to 15! Tickets are sold all around Serbia by Gigstix.com sales network at promotional prices of RSD 6,490 for EXIT, while Sea Star and Sea Dance still cost 3,990 dinars. The biggest saving is definitely EXIT Summer of Love 2017 package, where you can buy one ticket for all three festivals for only 7,990 dinars!