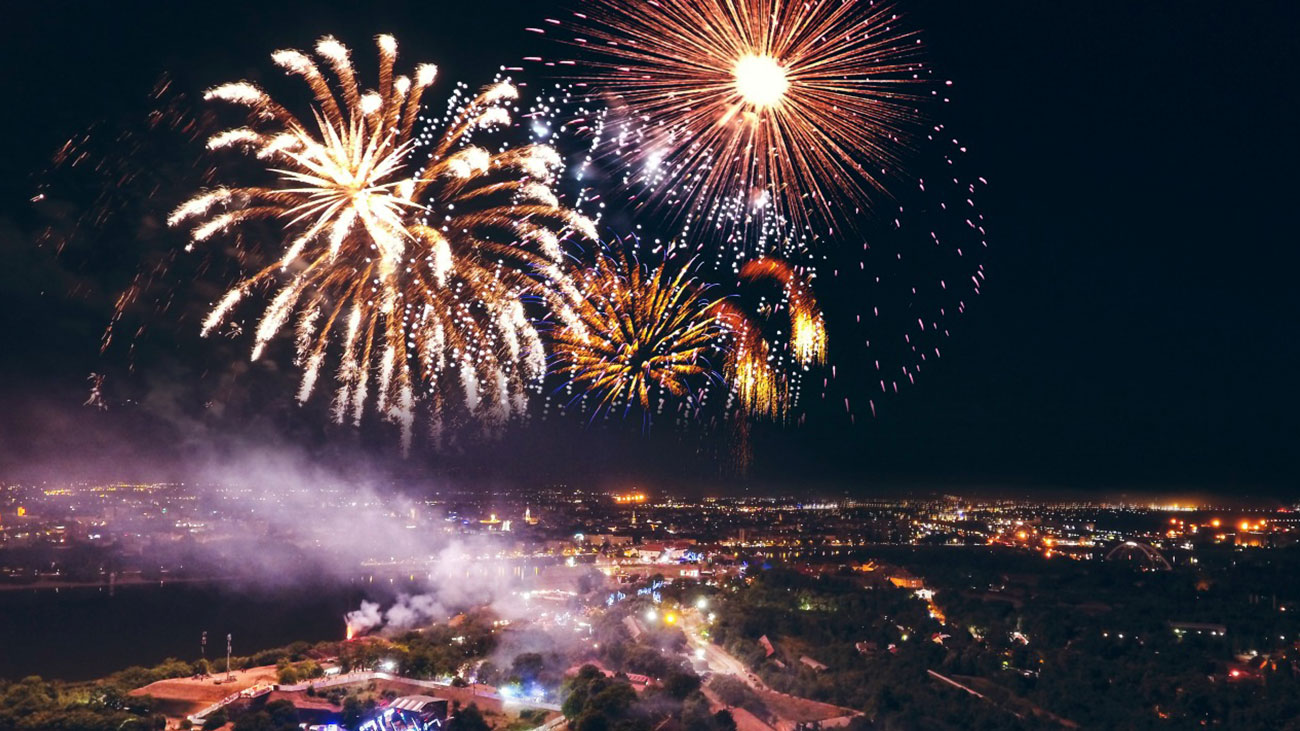 After a powerful start at the Day 0 of EXIT festival that featured The Killers and Jeff Mills at the first No Sleep Festival, last night saw the opening of all 43 music stages and various festival zones that hosted over 42,000 visitors. This edition of EXIT will be remembered for its most spectacular opening night in the history of the festival, which officially marked the 50th anniversary of the 1967’s Summer of Love, where the revolutionary hippie movement was born, with its basic values of peace, love, and community. Emotionally charged and socially engaged 45-minute program started with the Water Protectors from the native American tribe of Standing Rock who are opposing the construction of an oil line through their reservation. The oil line’s construction will put almost a third of the North America’s water supply in jeopardy. Isaac Weston and Aaron Turgeon travelled from North Dakota to appeal live on stage to world leaders from the Main Stage of Exit, with Sioux traditional prayers, to make the protection of the environment an absolute priority. They were joined by one of the best known motivational speakers, Nik Vujičić, who managed in 10 minutes what some cannot do after an entire night of music, to have the audience listen and follow his words with baited breath! Australian of Serbian origin, whose speeches have been heard by over 1.3 billion people in 64 countries in the world, spoke of the importance of love as the universal force that the world needs today more than ever. After the ovations for Vujičić, there came a theatre spectacle co-produced by EXIT and the renowned “Újvidéki Színház” theatre. Over 30 member of their troupe performed the famous songs from Hair, the musical, “Age of Aquarius” and “Let the Sunshine In”, with singing, acrobatics and dancing that brought the authentic spirit of the 60s to EXIT! As a ceremony finale, the traditional fireworks at the fortress was accompanied by Dragoljub Đuričić and his drummers. Apart from the Main Stage audience, the opening night was watched live by over 150,000 viewers at the official Facebook page of the EXIT festival, also broadcast by dozens of domestic and foreign media outlets.

After the fireworks, the stage was taken by the ex-Oasis singer and one of the greatest frontmen of all times, Liam Gallagher, who opened the concert with a hit that describes him best: Rock’n’Roll Star! The crowd sang along with his new single “Wall of Glass”, and Liam’s original vocals kept the audience entranced until the last moment, when the show ended with the everlasting “Wonderwall”. Before him the audience was warmed up by the legends of the alternative rock scene, Obojeni Program, and the indie godfathers, The Jesus and Mary Chain, were the next, arriving to Exit with a new album that was well received by the audience at the fortress! The Main had two stars of electronic music as well, the Belgian hitmaker Lost Frequencies and the Norwegian electro start, Alan Walker! Some of the greatest current hits were sung in unison, such as Walker’s YouTube hit “Faded” with a billion views, and the great summer hit of the Belgian producer “Are You With Me”!

After the spectacular opening, the new mts Dance Arena continued to impress with the new production which was used to the max by the mages of “live” techno, Paul Kalkbrenner, Booka Shade and Recondite, and the finale fell to Marko Nastić, for his 20th anniversary of making music! No Sleep Novi Sad was the second home for the legendary Scottish Sub Club last night, and their 30th anniversary saw Red Axes, Moscoman, and the club residents Denis Sulta and James Harrigan Harri.

Addiko Fusion stage did not lack energy, thanks to the recognizable hip-hop vibe brought by the New York queen of the genre, Princess Nokia! Great times were had with the Croatian Elemental, and the Serbian cult band Bjesovi, represented the perfect ending for the first day of the festival! Powerful performances were seen, traditionally, at the Explosive stage, where the Russian Arkona blew away the visitors, and this was continued by the Swiss Samael!

Craft Street held the first in a series of forums titled “Today – magic of dialogue”, with the topic “European Capital of Culture – managing expectations, challenges and legacy in the European Capital of Culture”. Craft Street will present interesting discussions and topic organized by Danas, every day at 19:30, while today’s topic will be dedicated to fighting discrimination, under the name of “Equally different or differently equal?”

The best party on the planet continues on the second day of the festival. The main festival stage brings the voice of the new generation, popular English singer-songwriter, Jake Bugg. British sensation, Years & Years, will bring another unforgettable night to the Main Stage of EXIT. Southafrican superstar Black Coffee, as well as the great Jamie Jones, will heat up mts Dance Arena, where the party will last until the morning, as always, with the sunrise greeting the visitors alongside the dynamic duo, Solomun and Dixon, performing a special three-hour back2back sunrise set, exclusively for the Dance Arena. The popular Addiko Fusion Stage will see the audiences move with the rhythms of Kanda, Kodža i Nebojša, as well as Bosnian band from Mostar, Zoster. Lovers of harder sound will have a great time withe bands such as Debeli Debeli precjednik,  Ratos De Poarao and Ground Zero.

All about money refund from Exit festival payment card