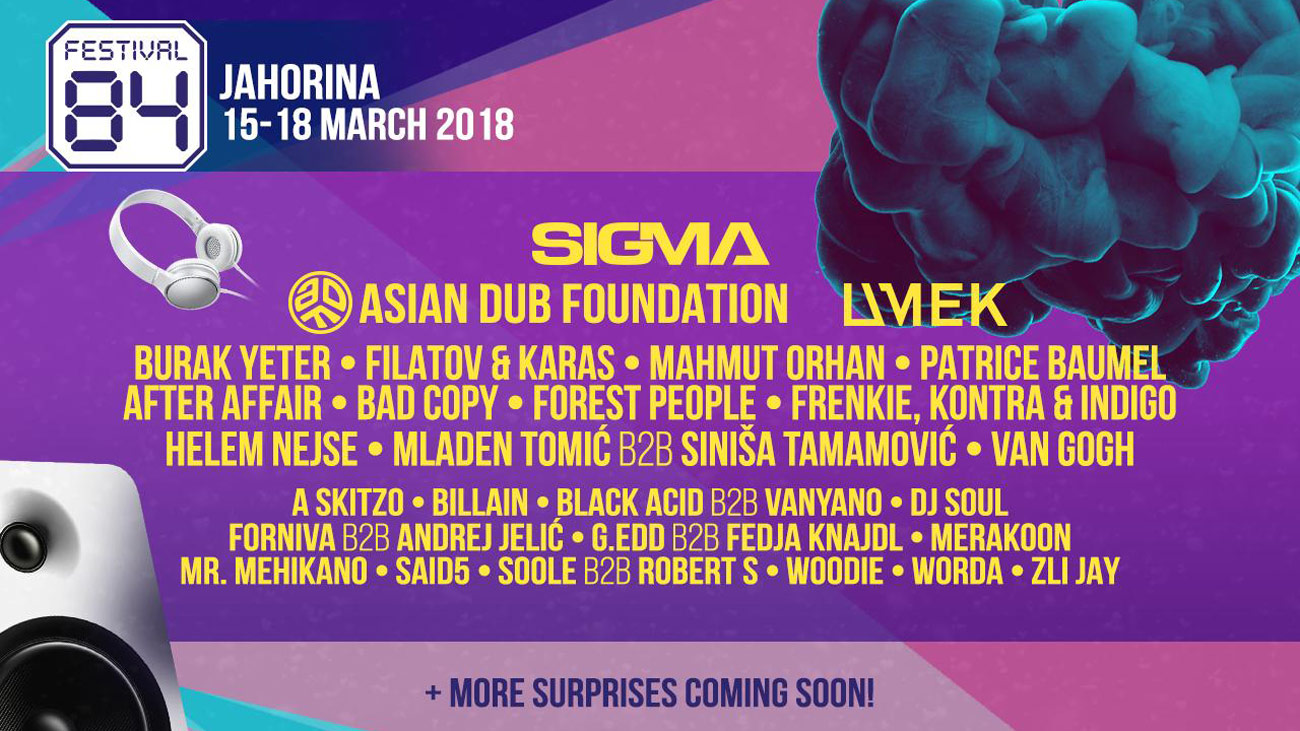 Just last week, EXIT was officially awarded the Best Major European festival award. In only two months, EXIT is starting the brand new Festival 84 on the Olympic mountain of Jahorina in Bosnia&Herzegovina! In its first year, EXIT is bringing some of the top international acts to Jahorina, alongside leading regional and local names! The furious list of Festival 84 is headlined by the activist collective, London-based Asian Dub Foundation, as well as the British bass superstars, Sigma, joined by absolute club hitmakers, Mahmut Orhan, Burak Yeter, as well as the Russian DJ duo, Filatov & Karas!

Real techno and house marathons on the mountain will be the duty of Slovenian “Technofather” Umek, the celebrated Dutch DJ wizard Patrice Bäumel, as well as the best selling techno duo on the Balkans, tandem from Banja Luka, Mladen Tomić and Siniša Tamamović! Regional rock superstars, Van Gogh, are coming to Jahorina to gather audiences from all over the place, and it will be just as wild with the regional rap stars, such as Bad Copy, Frenkie, Kontra and Indigo, as well as Helem nejse! Festival 84 also brings the best representatives of the local music scene, After Affair, A Skitzo, Billain, Black Acid b2b Vanyano, DJ Soul, Forest People, Forniva b2b Andrej Jelić, G.Edd b2b Fedja Knajdl, Merakoon, Mr. Mehikano, Said5, Soole b2b Robert S, Woodie, Worda, Zli Jay and many others!

After awesome performances at EXIT and Sea Dance, British duo Sigma is arriving as a DJ set to check out the audiences at Festival 84! Their huge hit, “Nobody to Love”, landed them two BRIT awards nominations and became a Number 1 single in the UK. A little later, “Changing” took over that position, their cooperation with Paloma Faith. They’ve worked with some of the greatest stars, Ellie Goulding, Kanye West, Eric Prydz and Skepta. With over 30 million views on YouTube, Sigma duo’s hit “Find me” was a cooperation with the Grammy-nominated Birdy.

The emotional video features the young rising star actress, Millie Bobby Brown, who plays the lead role in the planetary popular TV show Stranger Things! British Asian Dub Foundation already conquered EXIT and the Petrovaradin Fortress, and now it is Festival 84’s turn! Always direct and dynamic in their performances and lyrics, the activists who are never afraid to stand up against social injustice and fight for those whose voices can’t be heard are bringing an effective mixture of hip-hop, dancehall, rock, punk and reggae for those whose voices are rarely heard.

After last year‘s unforgettable party at the Sea Star Festival, the Slovenian techno legend – Umek, is coming to warm up Jahorina! He has a scene presence of over two decades and is personally responsible for popularizing electronic music in the Balkans, and is one of the most wanted Djs of today. Beatport awarded him the title of the best techno performer of 2010, while his track “Goes On” was chosen as the best at the International Dance Music Awards. The party will be joined by the internationally famous DJ and producer Patrice Bäumel! He is arriving to Jahorina after a very successful 2017, in which he was invited by BBC 1 radio to participate in creating the “Essential Mix” series, and his “Glutes” single found itself on the Mixmag list as one of the best tracks of the year and could be heard in clubs around the world! His sets are exploding with contagious energy and the feeling of adventure, creating the sound that is a pleasure for both the body and the mind.

Straight from the sea festivals of Sea Star and Sea Dance, Jahorina will host Mahmut Orhan, the creator of megahits “Feel” and “Save Me”, as well as the official “Game of Thrones” TV show theme remix. He will be joined by an equally sought-after hitmaker from Amsterdam, also of Turkish origin, Burak Yeter, whose single “Tuesday” was one of the most played songs in 2017. Afte almost 10 years of solo performances and publishing solo for some of the most eminent labels such as Universal Music, Warner Music, etc., the Russian DJ duo, Alex Karas and Dmitry Filatov, finally decided to join forces. After a great start in 2015, with the success of remixing the single by the French singer Imany, “The Good, the Bad and the Crazy”, this tandem was ready for unexpected success. Soon afterwards, the remix of the international hit “Don’t Be So Shy” went platinum and at the same time made it to the list of the most popular singles on Shazam music platform. With the new hit “Time Won’t Wait” and over 50 million views on You Tube, we can’t expect anything less than a phenomenal party on Jahorina!

After EXIT Summer of Love 2017, the biggest festival undertaking in the region, featuring Sea Dance at Jaz, Revolution in Timisoara, Sea Star in Umag and, of course, the central EXIT festival in Novi Sad, the new EXIT Freedom project in 2018 will be even bigger because the fifth member will join – Festival 84! The first edition of Festival 84 will take place from March 15 to 18 at multiple locations at the Jahorina Olympic Center. The festival program is created using the 2+2 formula also used for the extremely successful Sea Star Festival in Umag. The first day will, therefore, have a warm-up party, and in the following two days the festival will be open in full capacity, both during the day at the ski run and during the evening in a prefabricated building at the courts in front of Bistrica Hotel, but also in other indoors locations, both in Bistrica and other venues.The last day will be reserved for the closing party, with which the winter season at the Jahorina Olympic Center will be officially closed.

EXIT’s new No Sleep Festival gathered 25,000 people from over 30 countries in Belgrade!