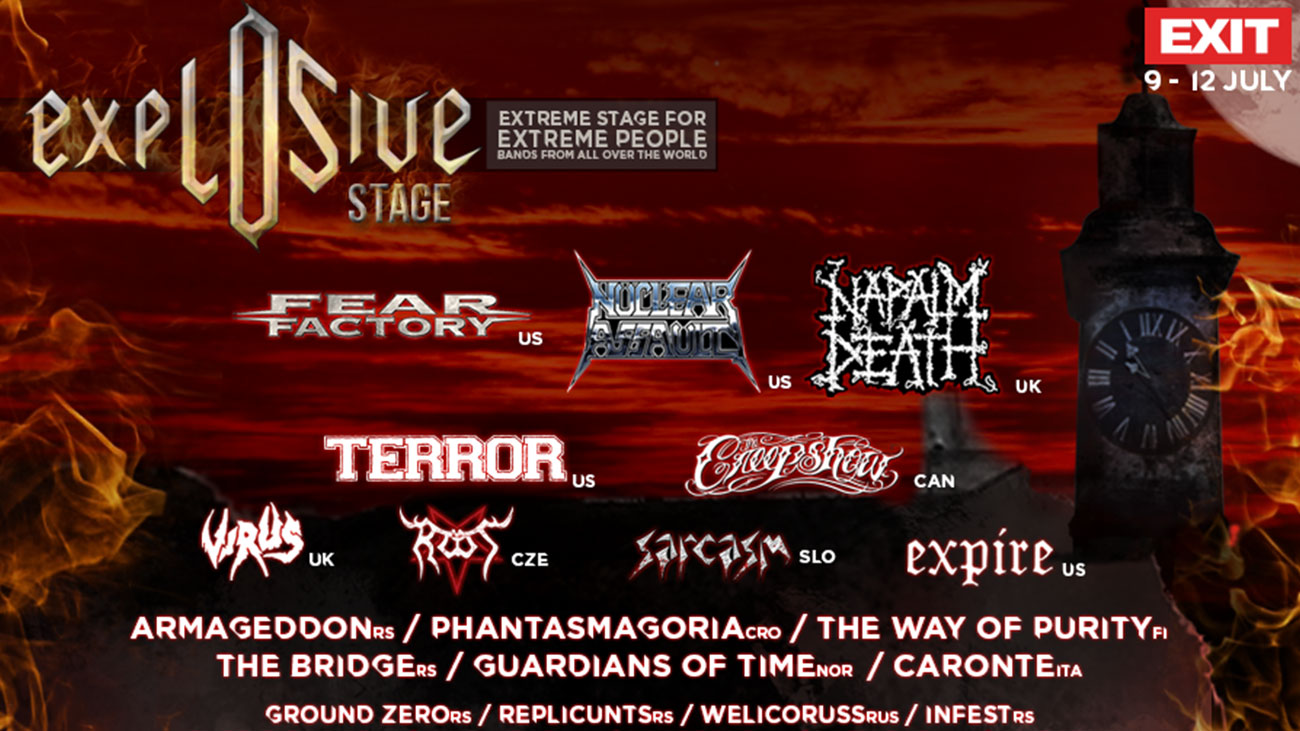 The heaviest stage in the Balkans, Explosive at Exit festival, will have one of its strongest editions this summer! Leading American industrial metalheads Fear Factory (July 12th) will play Serbia for the first time ever, just as New Yorkers Nuclear Assault (July 11th) on their farewell tour. One of the heaviest bands of all times Napalm Death (July 9th) are coming to mark the 10th anniversary since they lead the bill of former Metal Hammer stage at Exit, and Californian hardcore attraction Terror (July 10th) will also score their first ever show at the gargantuan moats of Petrovaradin Fortress. Along with previously confirmed headline aces Motorhead and new rock stars Eagles of Death Metal for Main Stage, the full list of Explosive Stage could compete on its own as full-fledged hard’n’heavy festival within Exit!

After 14 albums and over 30 years on world stage as leading grindcore band, Napalm Death have risen once more since their last album “Utilitarian”. Legendary quartet from Birmingham is known for their opposition to ruling elites and being the voice of oppressed and deprived. It’s hard to find a punk/metal/hardcore festival whose billing is not marked by bold letters of Terror. The tireless metalheads are coming from LA, bringing their new album with a solid promise to stay true to their hardcore sound that made them globally sought out. Many have been shocked to hear that iconic thrash metal band Nuclear Assault will head on a farewell tour, making their first ever show in Serbia even more historic to all headbangers. Leaders of this legendary NYC band, bass player Danny Lilker and legendary frontman John Connelly will blast their absolute metal anthems “Brainwashed” and “Critical Mass” at Exit this summer. One of the leading metal bands of all times Fear Factory will storm Explosive Stage with their 11th studio album, announced to be released this spring. First ever gig at Exit for industrial doyens will confirm their headlining status on this year festivals such are Westfest, Rockharz or Resurrection lead by another Exit’s headliners Motorhead!

This summer’s Exit Adventure starts at Novi Sad on July 9th to last for more than 10 days before its finale at magnificent Jaz beach in Montenegro on July 18th. Billing to both chapters of Exit Adventure has first confirmed acts such are Motorhead, Hardwell, Rudimental, Clean Bandit, Tom Odell, Chris Liebing, Adam Beyer, Sigma, Eagles of Death Metal, Roni Size Reprazent, Wilkinson, Octave One, Zomboy, Bondax and many others are to be announced very soon for more than 30 stages from Novi Sad to Jaz Beach.

Faithless to celebrate 20 years with a historic performance at Exit Dance Arena!