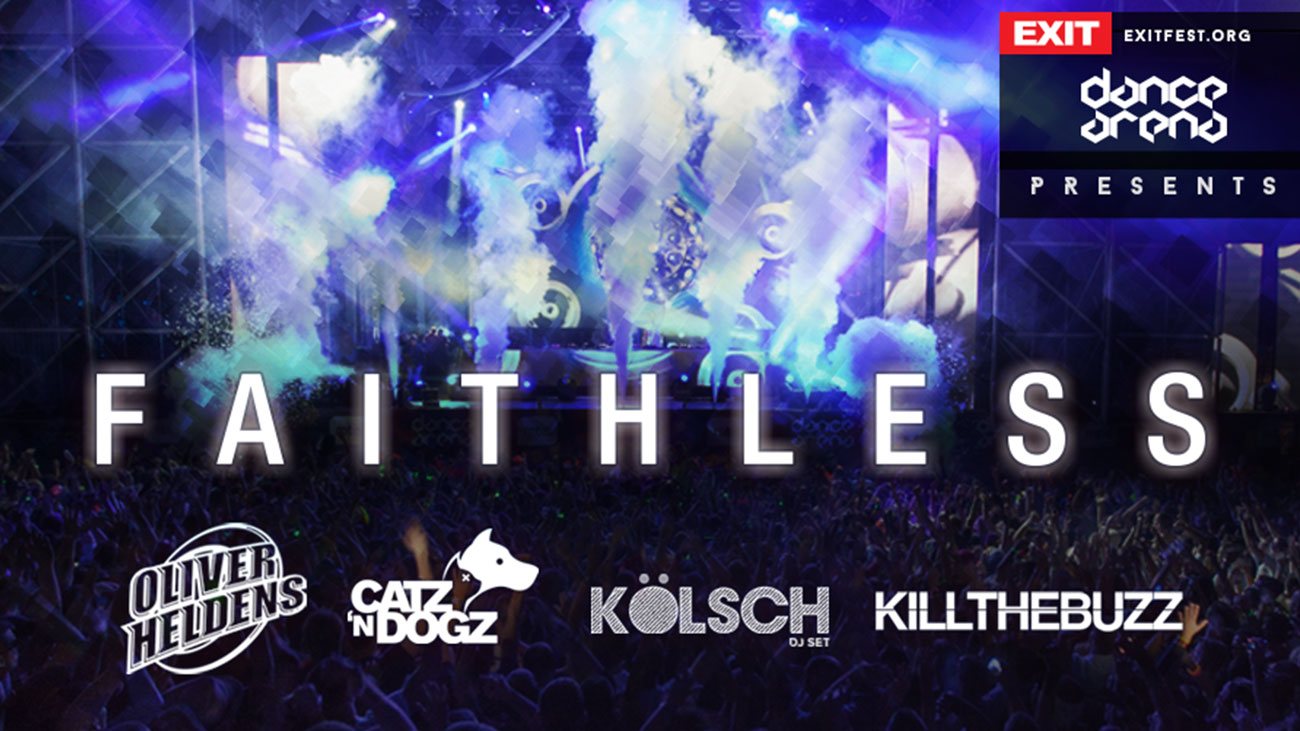 One of the biggest electronic music acts of all time, Faithless, will perform a full live set in the mts Dance Arena on 12th July! This performance will undoubtedly be one of the most eponymous and important concerts productionwise that EXIT Festival’s world-renowned biggest dancefloor has ever seen!  With the Arena’s magical/mesmerising energy combined with a set jam packed with some of the biggest dance tacks that have defined an era, Faithless will bring EXIT to a close with a bang. Other exciting artists joining the Dance Arena line up include: hitmakers Oliver Heldens and Kill The Buzz, Danish producer Kölsch, as well as one of today’s most wanted DJ duos – Catz ’n Dogz!

Recently news hit that FAITHLESS were reuniting in celebration of their 20th anniversary, so as 2015 marks EXIT’s 15 years it seemed only right to have them along to celebrate in style.  Returing to the stage for a series of special performances that mark 20 years of existence by remixing their “Faithless 2.0“. Alongside modern versions of throbbing classics such as “Insomnia“, “God Is A DJ“ and “We Come One“, “Faithless 2.0” also contains three brand new tracks. This way, Faithless will round off seven studio albums and countless singles, sold in over 15 million copies, with some of them reaching numerous chart tops.

Faithless’s creative core consists of the ever-charismatic frontman Maxi Jazz, the multi-instrumentalist Sister Bliss, as well as their producer, Rollo, who works under the radar and does not perform concerts with the band. From a complete anonimity, in July 1995, the band released their debut single “Salva Mea“, which ended #1 on Billboard’s US Hot Dance Club Songs, and in the top 10 of various European singles charts! Their global popularity was confirmed after the release of one of the most important tracks in the history of electronic music, the hit-single “Insomnia“ from the multi-platinum selling “Reverence“. A few years later, “God Is A DJ“, the other electronic music anthem came out, and in 2001 saw another dance mantra “We Come 1“! The act’s third full release brought us “One Step Too Far“, “Muhammad Ali“ and “Tarantula“, with its follow up, “No Roots“ reaching the very top of British album chart, with hit songs such as “Mass Destruction“, “I Want More“, “Miss U Less, See U More“ and “What About Love“. “Faithless Forever“, a compilation album that followed “No Roots“ enfirms the band’s #1 with the house ballad “Why Go?“.

Two albums that followed, “To All New Arrivals“ and “The Dance“ were released in 2006 and 2010 respectively, crowned by their second headlining performance, this time at Glastonbury’s 40th anniversary, alongside an enduring world tour which lasted for almost two years. Exhausted after the tour, but thankful for everything they had achieved together, Maxi Jazz announced the band’s farewell in the Spring of 2011. Two sold-out, final concerts in London were followed by fans in some of the biggest theaters across the world via live stream.

Joining Faithless on the Dance Arena this Summer will be a lot of other exciting artists, some of which we can proudly announce now and all of which will be making their EXIT Dance Arena debut this summer…

Having risen to fame at such an early age OLIVER HELDENS keeps pushing himself further and further gaining thousands of fans worldwide and having huge success with his music and DJ career, we can’t wait to have him in July. Joining him will be the Polish duo of CATZ ‘N DOGZ, head honchos of PETS RECORDINGS which is responsible for some of the biggest releases over the past 5 years. The pair successfully bring this energy and exciting sound to each of their performances and this summer will be no different.

Next up we have a man that needs very little introduction, his name is KÖLSCH. In 2013, his LP ‘1977’ redefined techno and well and truly made it only a matter of time before he played the EXIT Dance Arena. Finally rounding off this wave of artists is the very exciting KILL THE BUZZ, one of the newest names on the Big House scene in recent years.

The Balkan attraction that amazed the world will perform at Sea Dance festival!