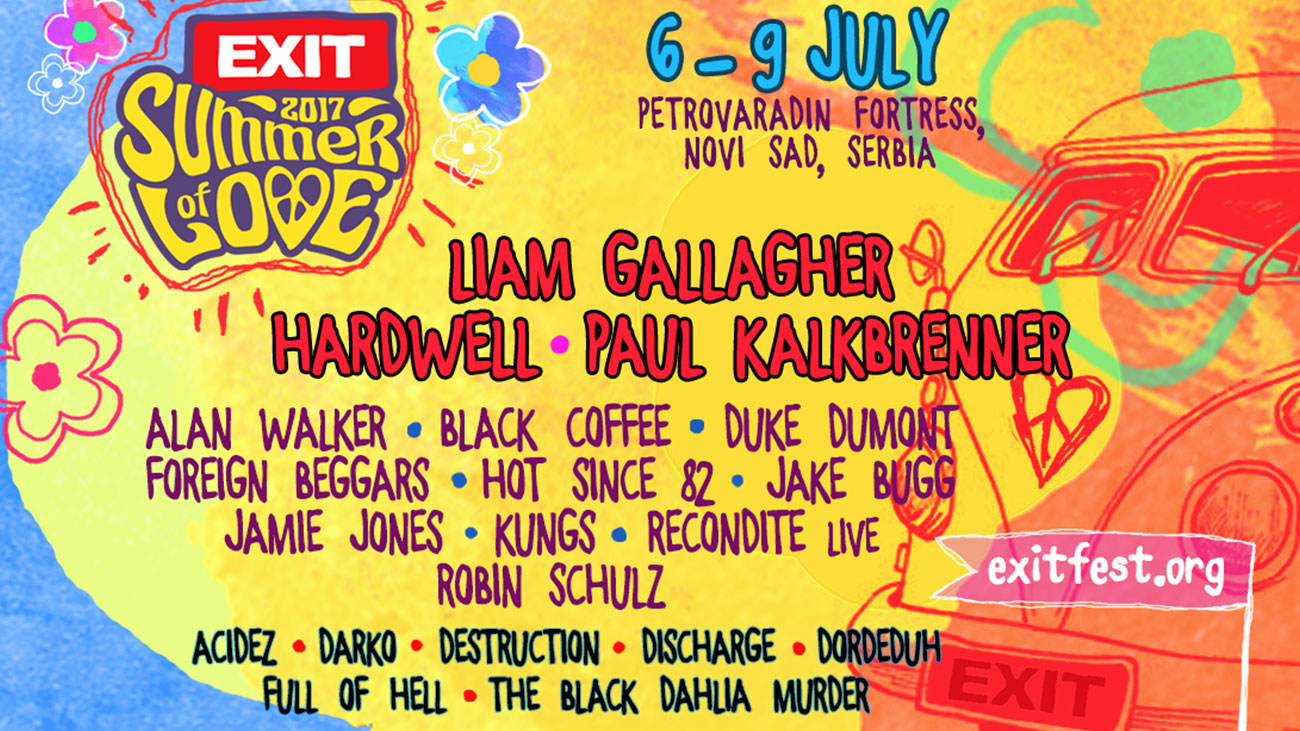 The frontman of Oasis and one of the true rock stars, Liam Gallagher, will headline the EXIT festival in Serbia on July 6th! The hit documentary, “Oasis: Supersonic” on a recent run in the world cinemas, presented the story of the band who, in less than 3 years, had gone from their first gig to the greatest rock concert in British history. In the survey of Q Magazine from 2010, the public voted Liam as the greatest frontman of all times, topping legends such as Freddie Mercury, Jim Morrison, Robert Plant and John Lennon! His first solo album is one of the most anticipated in 2017 and even Robbie Williams, who often had media rows with him, is excited about it: “Liam was the voice of our generation and the soundtrack to our lives. I just want him to make a really great album, the world misses him and I hope it is brilliant.”

The main festival stage also welcomes the voice of a new generation, the popular 22-year-old English singer and songwriter Jake Bugg! He is coming to EXIT after three albums at the top of UK chart and performances on some of the greatest festival stages, all leading to the NME awards for the Best Solo Artist. This year will also continue the tradition of great parties after concerts at EXIT’s Main Stage, and the first one will be hosted by the electronic trio headed by Alan Walker, the author of hits “Faded”, “Alone”, “Sing Me to Sleep” and others that have totalled in over two billion YouTube views! Saturday is reserved for the popular London hip-hop and dubstep band Foreign Beggars, while a true electronic spectacle is expected on Sunday, the last day on main stage! EXIT’s Main Stage closing party made of banging beats and great visual effects will be commanded by no other than one of the today’s greatest DJ superstars, Hardwell!

On the same night as Liam, another stadium act, Paul Kalkbrenner, is coming to EXIT, but to the festival’s notorius mts Dance Arena! German techno producer recently performed in front of 500.000 people at the Brandenburg gate, confirming his superstar status. On the same bill, another German whose live acts have became quite a global sensation, Recondite, will too experience the breathtaking view of the fully packed mts Dance Arena! Saturday at the mts Dance Arena is always reserved for the greatest hitmakers, and the first in this unstoppable list is Duke Dumont, whose summer anthems “Ocean Drive” and “I Got You” reached the top of the charts, along with a Grammy nomination! This year, Robin Schulz will finally arrive at EXIT’s mts Dance Arena after last year’s cancellation due to sudden illness, only this time with another great hit single “Shed A Light”! They will both be joined by the young French star Kungs, whose megahit “This Girl” left behind hits such as “Happy” by Pharrell or “Chandelier” by Sia on the “Shazam’s Hall of Fame” list! Just like the last year’s “Techno All Stars” gathering at the Arena, this year it all leads to “House All Stars”, where together with Dumont, the other most-in-demand genre representatives will be on the same bill: Jamie Jones, Hot Since 82 and Black Coffee!

Heavy guitar sounds will be delivered on the metal, punk and hardcore stage of the EXIT Festival – Explosive! First seven bands to ignite the explosive lineup are lead by the famous German thrash metal band Destruction, who are coming to EXIT with a new album, on the eponymous “Under Attack” tour which will hit about 30 cities in Europe in only the first two months of this year! Legendary British hardcore punks, Discharge, whose songs were covered by Metallica, Anthrax and Sepultura, are coming back to the fortress with their new album “End of Days”, and they will share the night with the furious Mexican band Acidez! Special place in the program is reserved for the Detroit sensation and one of the most important death metal bands of new generation, The Black Dahlia Murder, headliners of the greatest metal festivals, and a band whose social networks have millions of followers! EXIT welcomes the up-and-coming American grindcore band, Full of Hell, British skate-punks from Darko, as well as the Romanian black metal mages Dordeduh, the descendants of the cult band Negura Bungeta!

Only 1 ticket for all 4 EXIT-run festivals in the region!

EXIT Team will connect four festivals in the region in a unique EXIT Summer of Love 2017. First of them is Sea Star, a new festival in Istria, held in the city of Umag on the 26 and 27 of May, with confirmed performances by The Prodigy, Dubioza Kolektiv and Urban&4. What follows is the Revolution Festival in Timisoara, from 1-3 June, and right after the EXIT Festival (5-9 July) comes the fourth edition of Sea Dance Festival (13-15 July)! After many fan pleas, the offer “1 ticket = 4 festivals” will be extended until 30 January. In that period, each EXIT Festival ticket will be valid for other 3 festivals as well! All buyers, current or future ones, will only need to quickly register their EXIT tickets in order to use them to enter the other festivals too. Registration will start from 1st to 28th February at our website.

Everything is ready for a spectacle! Festival 84 and Olympic parties on Jahorina are about to start!