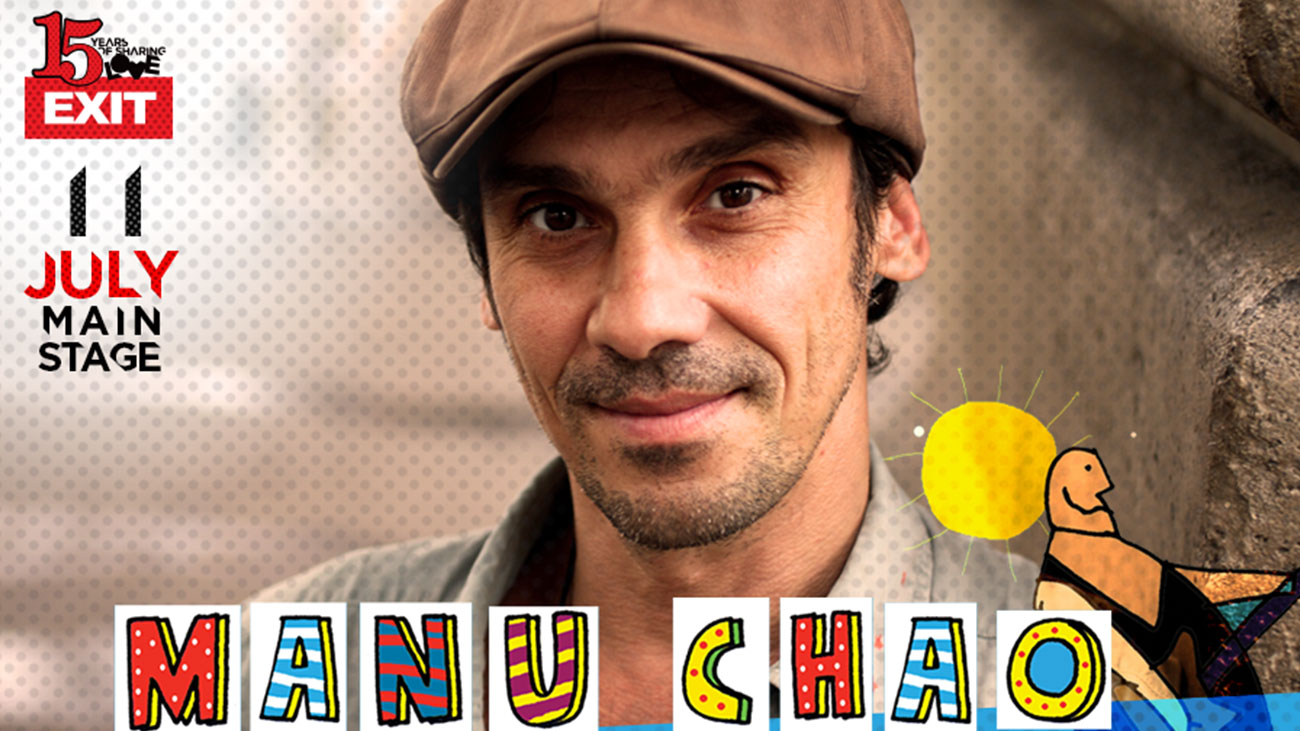 The revolutionary musician, activist, and one of the most important voices of world music, Manu Chao, is set to perform at Exit festival’s main stage on Saturday, July 11th! Along with this year’s huge adventure names like Robbie Williams, Motorhead, The Prodigy, Faithless, John Newman, Rudimental, Clean Bandit, Hardwell, Sigma, Martin Garrix, Tom Odell, Tale of Us and numerous other surprises, the current musical season in Novi Sad, Belgrade and Budva will be one of the strongest in the history of the Balkan region, ever. Seven years after his historic performance at the Petrovaradin Fortress, when the main stage proved tight for the 35.000 fans who sang in chorus and danced to Radio Bemba’s rhythm, Manu Chao is coming back with La Ventura this time. The lively band is made up of guitarist Madjid, bass player Gambeat, and drummer Garbancito. This particular La Ventura tour is backed up by two additional brass players, and promises not only a set list containing the biggest hymns like „Clandestino“, „Rainin’ In Paradize“, „Mi Vida“, „Politik Kills“ and „Mala Vida“, but with numerous other surprises, unreleased songs, and perhaps even covers of legends like Bob Marley! Manu held a series of performances at world-renowned festivals such as Roskilde and Woodstock last year, and was recently host at a few stadium performances in Argentina and Columbia!

The unyieldingly rebellious and equally heartfelt performer known for his social activism and pumped up lyrics, Manu Chao is one of the most influential musicians in recent history, renowned all over the world with performances at five continents! The Spanish-born activist and French-made artist built his characteristic sound through diverse punk influences like The Clash, Jam, or Dr. Feelgod. His songs reveal uncompromising lyrics, which made him a voice of the freedom generation and freethinking people who refuse global politics’ dictatorship and the ever-growing alienation of the modern world. Manu, unlike any other musician in the world, fuses punk attitudes, the lyricism of French chansons, salsa rhythms, reggae egalitarianism and ska euphoria, thus giving his songs a particular taste, much to the delight of audiences from all meridians. Manu sings in an incredible seven languages and often about immigration, love, life in ghettos, freedom of thought and life, and authentic events from his rich experience. During the time with his brother Antoan when he lead Manu Negro he performed at several seaside locations in Africa, on board a stage built on the deck of their tour boat. Another unique venue was in a retired train called the “Ice Express” during their tour when they played through much of rural Colombia. Over 5 million copies of his award-winning album Clandestino have been sold to date, testifying to his immense reach and influence, as well as the fact that even the British singers Robbie Williams and Lily Allen recorded covers of the songs “Bongo Bong” and “Je ne t’aime plus” and released them as a single on the album Rudebox.
Leading soul lady in the world Emeli Sandé to open 15th Exit festival!