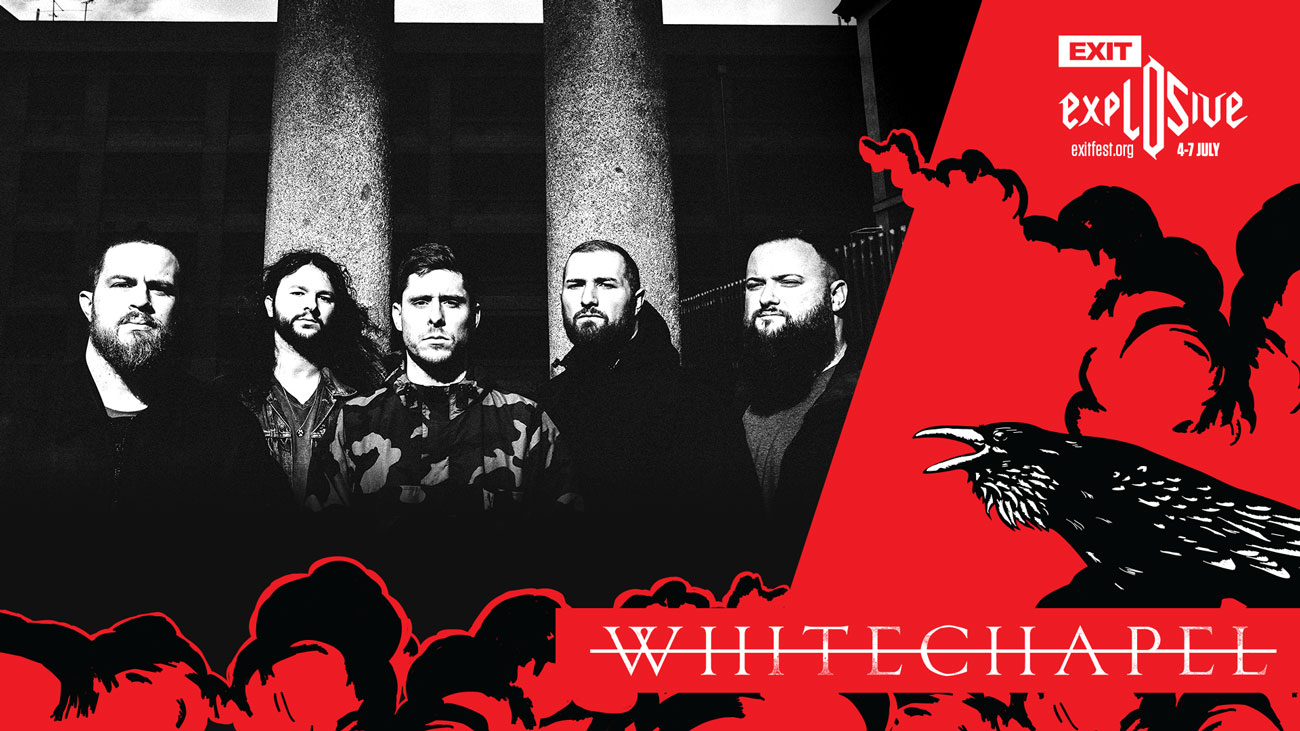 Explosive Stage, located in the trenches of the Fortress, will be a place of pilgrimage this year for fans of heavy sound at EXIT Festival. Apart from the already announced Phil Anselmo who will perform a pure Pantera set on Main Stage alongside his new band The Illegals, as well as the operatic metal diva Tarja Turunen who will be arriving to Addiko Fusion Stage, EXIT and Explosive will welcome Arcturus, Entombed A.D, Peter and the Test Tube Babies and Total Chaos, as well as a large number of other local and world-renowned performers ready to shake things up.

New reinforcements are spearheaded by one of the leading deathcore names in music, Whitechapel, known for their raw performances that should not be missed, alongside the giants of Swedish melodic death scene, Soilwork, who will take the audience on a sonic voyage through their prolific career and share the songs from their latest studio album, “Verkligheten”! Booze & Glory, the fearless Oi!/street punkers from London, will also present their heroic dedication to live performances on this year’s Explosive Stage, while Das Ich, true legends of Germany’s and the world’s dark wave industrial scene who inspired innumerable artists around the world since their inception in the 80s, will prepare one of their characteristically lucid performances.

Powerful riffs will be the domain of Enforcer, one of Sweden’s strongest heavy speed metal bands, who have been on a rising popularity streak for the last 14 years, and the Fortress will also be visited by one of the most appreciated doom metal names of this unique and dark scene, the Swedish band October Tide. Dutch hardcore musicians Vitamin X will be bringing their recognizable clash of punk/HC, thrash metal and rock riffs of the seventies, followed by the young English punk band Grade 2, with their fast and powerful sound, melodic guitars and vocal parts that just call for a singalong. Straight from the Russian frozen hell comes the crossover band Siberian Meat Grinder, mixing hardcore thrash with a multitude of genres – from black metal to rap. Explosive Stage audience will also meet the Romanian Sur Austru, formed by the remaining members of the cult band Negura Bunget, with the goal of keeping the spirit of the band alive. The local scene will also bring the Slovenian band KAOZ – the experienced metalheads from Velenje who’ve been on the stage for more than 20 years, creating a sonic thrash jungle with their unique approach.

Apart from them, the fiery army of this year’s EXIT will be made up of Scandal, the melodic street punks from Romania situated in London, as well as Otvoreni Prelom, an anarcho-hardcore punk treat from Serbia, alongside the leading local dark wave band Asphalt Chant and the veterans of the Romanian gothic doom scene – Grimegod. The most extreme stage of Petrovaradin Fortress will further be conquered by Maltese extreme metallers MartYriuM and the Belgrade hardcore band Bronze, while more local reinforcements come in the shape of two bands from Zagreb – hardcore Ponor and metalcore Pale Origins – and Thundersteel who will bring an oldschool heavy metal sound to EXIT Festival.

Some of the best names in rock today, including living legends of the scene, will visit the next edition of EXIT Festival, from July 4 to July 7, with the festival so far announcing the likes of The Cure, known as one of music’s greats, rock’n’roll prodigies Greta Van Fleet, the most famous DJ of all time Carl Cox, the icon of the heavy scene and former Pantera frontman Phil Anselmo with his band The Illegals, the diva of metal with a flawless voice Tarja Turunen, as well as Dimitri Vegas & Like Mike, Paul Kalkbrenner, Lost Frequencies, Sofi Tukker, Tom Walker, 65daysofstatic, The Selecter, Whitechapel, Arcturus, Soilwork, Entombed A.D, Peter and the Test Tube Babies, Booze & Glory, Total Chaos, Das Ich and Atheist Rap, with many other great names to be announced in the following weeks.

There is a limited batch of EXIT ticket packages at the price of £89/99€, which is a 25% discount compared to the final price! The first day ticket prices, including the performance by The Cure, are £35/39€ for the floor, £45/49€ for the fan pit, while GOLD VIP daily ticket for July 4 is £90/100€. EXIT tickets can be purchased via the official exitfest.org page.