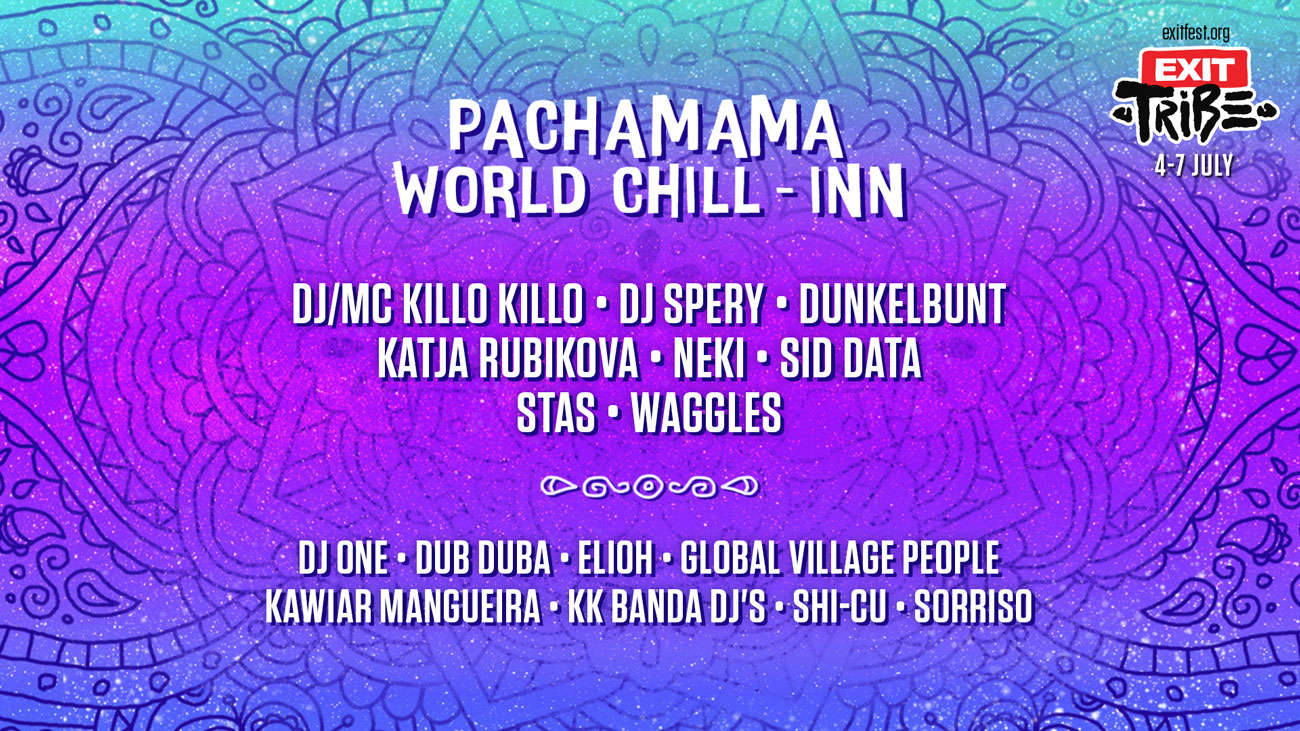 The hidden oasis with spiritual vibe that is the Pachamama World Chill-Inn Stage, tucked-in right across from the famous Reggae Stage, gathers lovers of good sound and global club music. Its program consists of carefully thought-out sets of recognized local and international DJs, arranged by the stage host from Novi Sad, DJ/MC Killo Killo, who will make sure that visitors leave the Pachamama World Chill-In Stage with a smile and eagerly expect festival’s next edition.

Fans of world music will have the opportunity to enjoy the sets of some of the acclaimed artists from both local and international scene. Spery, a passionate Greek DJ is coming to EXIT with her “Balkanization Project”, which transforms the every venue she plays at into an Emir Kusturica’s scenery! Petrovaradin Fortress will host one of the most important Global Beat Troubadours of the new millenium and one of the pioneers of Electro Swing, Balkan Beat and Global Bass, Austrian-origin, Dunkelbunt, as well as Serbian electronic dance music producer, DJ and musician, Neki, one of the most influential and fundamental moombahton / global bass artists in the world. They will be joined by Russian Katja Rubikova, serving a music Kompott cocktail out of hot babushka breaks with cold vodka musica, raw Russian swing with fresh Ukrainian klezmer, easy electro polka with dreamy gypsy ska. Performances have been confirmed by Sid Data, resident of the Vienna Ost Klub, constantly in search of connection between Balkan and Bollywood tradition– and Waggles, a UK master of global grooves, funky breaks, tropical bass and balkan bangers, who blends world and dance music that will tickle your earbuds with only the nicest vibes! One of the most active promoters of the tropical and global bass scene in Hungary and founder of Babylon Records, Stas, will bring his is inspiration by African, Middle-Eastern, Asian and South-American tribal music’s instrumentation and articulation mixed with contemporary electronic music, resulting in an exotic fusion of melodies, percussion and bass.

Apart from them, DJ One will also play at this stage, with the mixture of timeless specialties from around the world, as well as Dub Duba, one of the finest DJs along the Danube, elioH, the multi-genre DJ from Brazil, who resides in the Balkans, as well as Global Village People, who will take you to a different musical journey with unusual and intriguing sounds. Among the global music artists at Exit, the audience will also enjoy the sounds of Kawiar Mangueira, a DJ, composer, pianist and conductor, taking us all through the worlds of funk, disco, reggae and rap, as well as KK Banda DJs, whose music is based on roots reggae, and contains elements ranging from rock-steady and dance-hall to typical Caribbean styles and ska, as well as the musical pedagogue Shi-Cu and Sorriso, an ambitious DJ and producer with a knack to make people move.