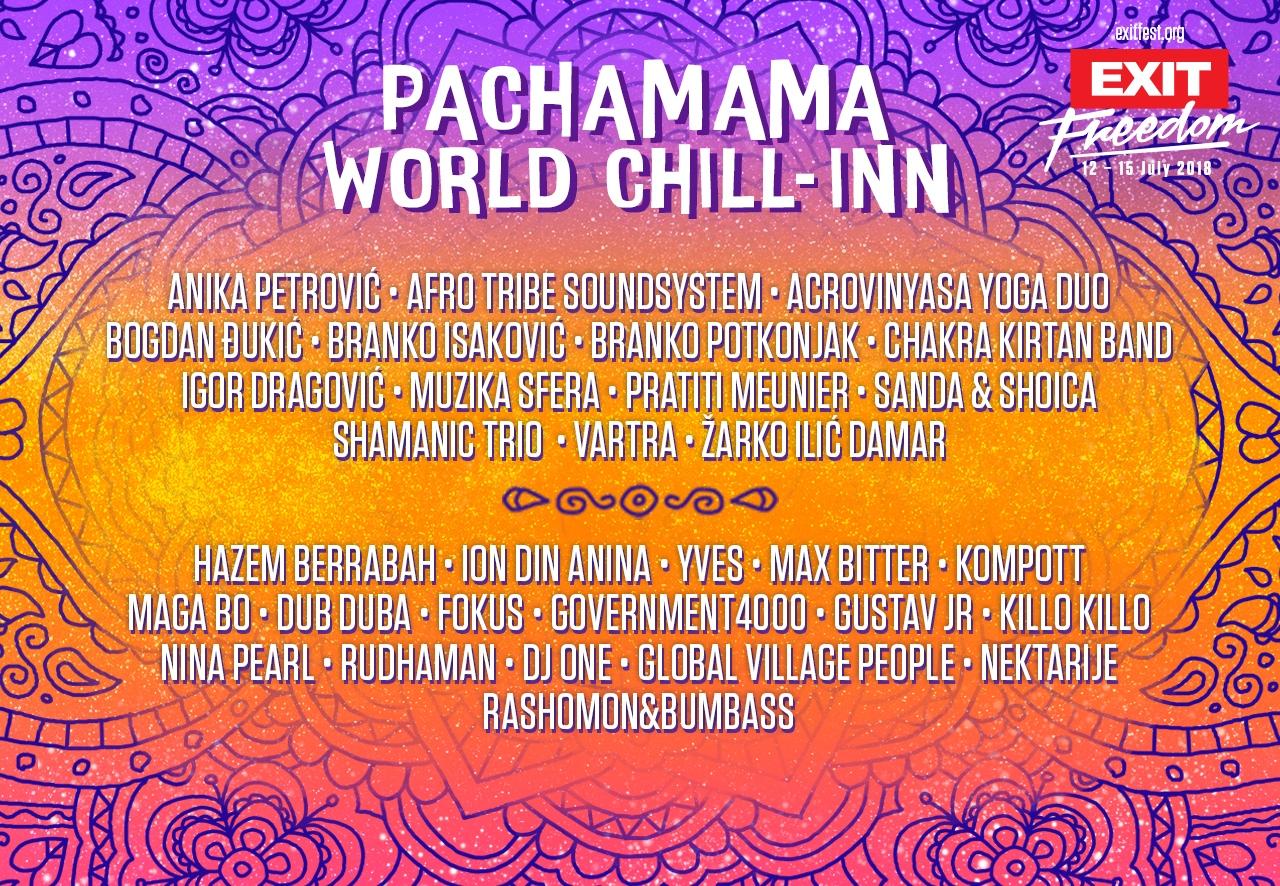 Spiritual festival zone that debuted last year and caused a great interest among the visitors, Pachamama, will share space with the World Chill-In stage this year, known for exotic music from all around the world, lead by the well-known DJ and MC from Novi Sad, Killo Killo.

Pachamama will feature Anika Petrović on Tibethan gongs, while kirtan performers (traditional hindu songs Chakra Kirtan Band with guests of honor, Sacinandana Swami and Kandamba Kanana Swami will open our hearts and awaken deep emotions. Traditional Balkan music singer, Žarko Ilić Damar, will awaken the pulse within us with his modern approach, recognizable arrangements, traditional instruments and voice. Branko Isaković, composer and multi-instrumentalist from Belgrade, will present his newest projects from the Divine Sound arrangement to the audience, focused on ambiental and healing music. Audiovisual artist, composer and producer Branislav Micić will bring something new to the Pachamama stage playing on instruments with Pythagorian tuning at 4 3 2 Hz. The band from Sarajevo Shamanic Trio, uses sound vibrations of instruments, from shamanic drums to analogue keyboards, gongs and Tibethan chimes that will take you on a shamanic journey. Musical inheritance typical of these regions, enriched with an unimposing use of Latino rhythms will be brought to us by Sanda & Shoica. Branko Potkonjak, a multi-instrumentalist and composer, followed by Spomenka Milić (vocal, bass) will play the sitar, guitar and traditional instruments in eclectic compositions. Pachamama stage program will feature the interactive performance of dynamic Osho meditation by the Chilean artist Pratiti Menuer. Creative combination of afro-tribe sound on traditional jembe instruments, alongside guitars, keyboards and vocals, will be performed by the AfroTribeSoundsystem from Banja Luka, filling the stage with a happy, dynamic energy that invites the audience to a liberating dance, as the final Pachamama act.

World Chill-Inn is the festival haven for all the fans of the so-called “global club” music. Among the representatives are the Tunisian, Hazem Berrabah, who developed his artistic persona along the afro and tribal sounds, Ion Din Anina from Spain, who creates synergy between traditional music and modern electro-beats, as well as Maga Bo, American-Brazilian DJ, world traveler in search of local rhythms to incorporate into his work. Max Bitter with his Kompott collective will bring us a mixture of progressive electro rhythm, Soviet classics and traditional folklore, while the Belgian DJ Yves will present exotic songs in a variety of genres, such as ethno-house, space, tribal techno and dream house.

Dub Duba, one of the best DJs of Danube, will create an unforgettable party, where he will be joined by Fokus, whose music was inspired by reggae and dub, as well as Government 4000 in a b2b set with Killo Killo, which is guaranteed to get the juices flowing. One of the first representatives of the breakbeat scene in Serbia, Gustav Jr, is also there, as well as Nina Pearl, a DJ duo from Serbia, creating a perfect combination of wild and elegant styles. Rudhaman from Podgorica arrives to share his love of house music which became the base of his performances.

DJ One will be in charge of the night fever, with his style being the mix of timeless specialties from around the world, as well as Global Village People, who will take you to a different musical journey with unusual and intriguing music. Apart from them, the audience will see Nektarije, the Banat expert of reaching the core of some of the best music on the planet as well as Rashomon & Bumbass selektaz, partymakers from Novi Sad, whose motto is: “You either dance or you’re crazy.”