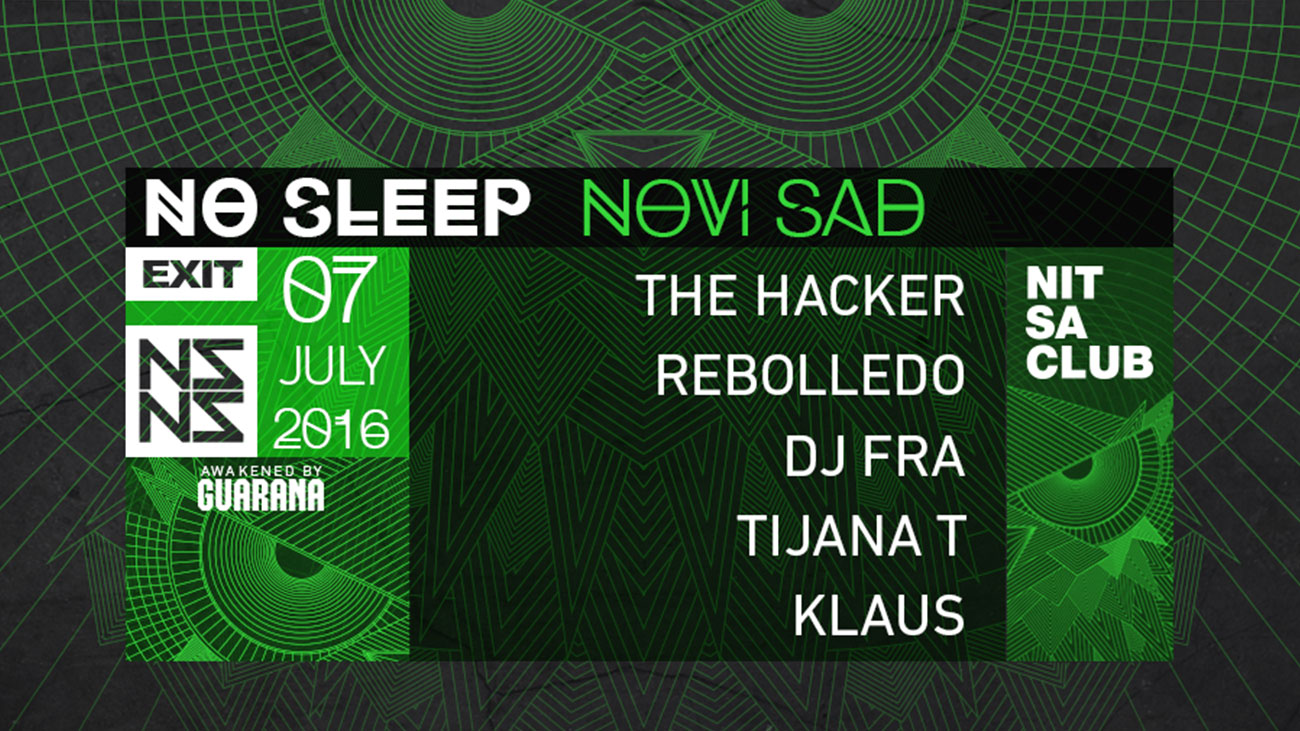 Nitsa, one of the most beautiful clubs in Europe, nestled in the legendary theatre hall Apolo in Barcelona, will start off this year’s program on No Sleep Novi Sad stage at EXIT festival on Thursday, 7 July! The sound of the city that stays awake 365 days a year is brought to the Petrovaradin Fortress by Rebolledo, The Hacker, DJ Fra, Tijana T and Klaus! The warm up for this year’s EXIT will start in the Spanish metropolis on 20 May, when club Nitsa will host the great No Sleep Barcelona party! One of the leading European clubs, with a tradition spanning three decades and at the very centre of Barcelona’s renowned nightlife, will announce this year’s EXIT, with a party which will feature a live performance by American producer DeepChord, Barcelona’s legendary DJ Fra, and the ever more popular DJ Angel Molina. The honour of performing central set that night, flying the No Sleep colours, will go to our leading international DJ star, Tijana T! It will also mark the continuation of the partnership between the two major European festivals – EXIT, and Primavera Sound Festival, which was also founded and continues to be managed by people from club Nitsa.

Spiritted Barcelona will be represented at Exit by one of the most influential producers of the contemporary electronic scene, the harizmatic Rebolledo! The musical revolutionary from Mexico is known as being one half of the popular duo Pachanga Boys, while his latest album “Mondo Alterado” has recently had an exceptional promotion in Paris, which was accompanied by special guest performances by Maceo Plex and Jennifer Cardini! Just like with previous albums, the studio album “Super Vato” and the double mix “Momento Drive”, this time around as well, Robelledo brings an high-octane sound of sports cars from the enchanting past, with equally raw, powerful and exciting musical quotes, dug from his treasure chest of rarities and completely unusual vinyls. Robelledo is undoubtedly the master of atmosphere, as his album was described by critics as a “cinematographic Porche ride through the desert”, just like the one in Navada where he performed during last year’s Burning Man. His occasional vocal output is maybe best described in songs “Guerrero” and “Windsurf, Sunburn & Dollar”, while his ever original, retro videos add a new dimenstion to the seemingly endless charm of this talented Mexican!

No less than two weeks after taking centre stage during his first No Sleep Weekend in Belgrade, and according to many giving the most notable performance on the legendary electronic festival Nuits Sonores, “the dark price of techno”, The Hackerarrives to No Sleep Novi Sad stage! One of the pioneers of the electronic sound, known also for his revolutionary collaboration with Miss Kittin, and cult status hits “Frank Sinatra”, “Stock Exchange”, “1982” and countless others, as well as influential albums “Rêves Mécaniques” and the current “Love/Kraft”, he will present his new label at Exit – “Zone”, which features artists such as Gesaffelstein, David Carreta, Maelstrom, Jon Convex, Arnaud “Black Strobe” Rebotini and others.

They will be joined on stage, on 7 July by DJ Fra, a living mucial icon of the scene in Barcelona, and the resident of club Nitsa and the Primavera Sound Festival. He is also the producer behind legendary label Kompakt’s renowned project Ferenc, and one of the highest ranking DJs in Spain! After Belgrade and Barcelona, Tijana T will have her third appearance during this year’s No Sleep series, on 7 July in Novi Sad, while the honor of igniting the four-day long party at the Fortress falls to the resident DJ of Exit’s legendary stage, Klaus.

This year’s concept of No Sleep Novi Sad will present four nights highlighting the leading “underground” clubs in Europe. Beside club Nitsa from Barcelona, the sound of Germany will be represented by the renowned techno institution –Tresor from Berlin, currently Europe’s most popular club – Concrete, from Paris, as well as the combined momentum of the most exciting Austrian club – Grelle Forelle from Vien, and our own legendary club Drugstore from Belgrade. Performances on Exit’s legendary No Sleep Novi Sad Stage have already been confirmed by Moritz von Oswald, Rebolledo, Tommy Four Seven, Dasha Rush, The Hacker, Zadig, Antigone, Psyk, Francois X, DJ Fra, Tijana T, Shlømo, Lag, Regen, Filip Xaviand Klaus, while names for the program during the closing night on Sunday, 10 July are coming soon.

Exit and Sea Dance shortlisted among the best European festivals!