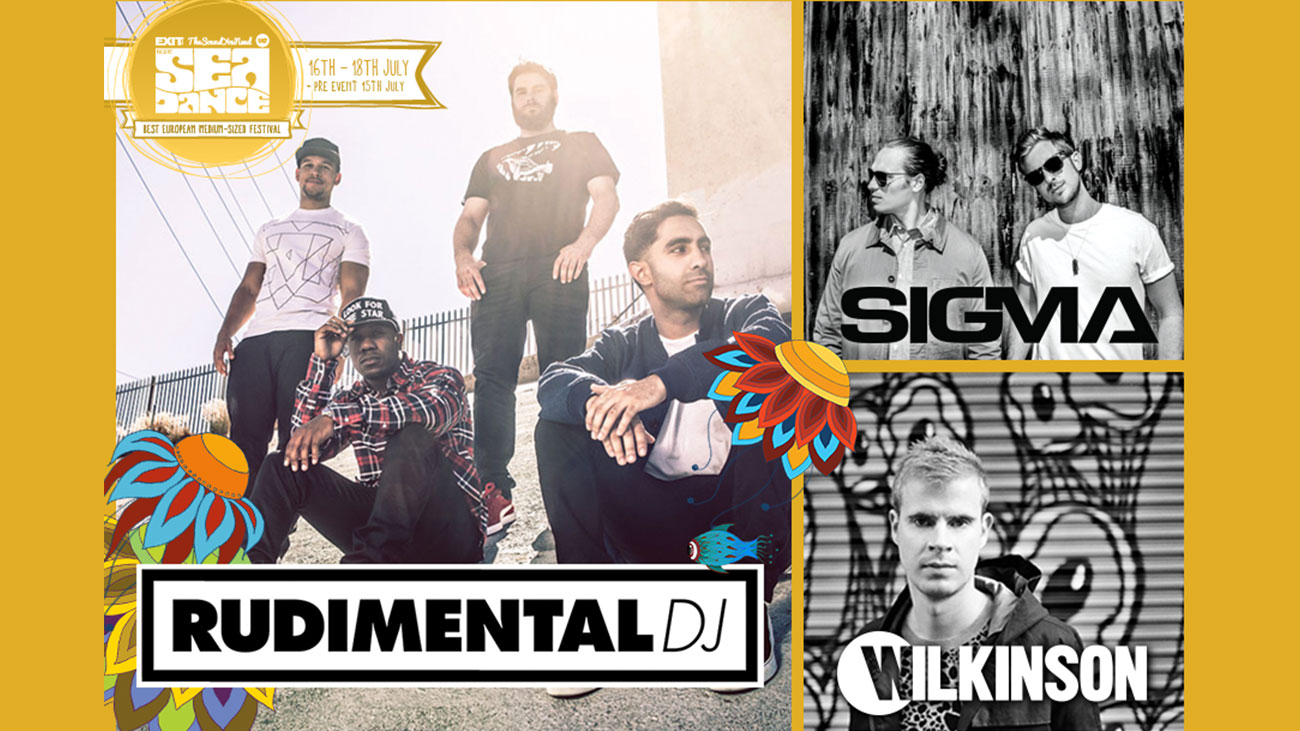 One of the most popular crews today, Rudimental, as well as the hotly-tipped duo from Britain, Sigma, and the ever-more popular London-based DJ, Mark Wilkinson, are the first confirmed performers for the Main Stage at Sea Dance festival at Jaz beach this year. The “Best Medium-sized European Festival” is situated next to the historic town of Budva, at one of the most beautiful beaches of the Adriatic Sea. It will be held as the sea edition of the EXIT Adventure from 15th to 18th July. The first three of the numerous, equally contemporary names, which will grace Sea Dance festival this year, are just a taste of the innovations that countless visitors from all over the world can expect at Jaz beach.

Last year’s Exit festival headliners, Rudimental, are coming to Sea Dance festival on 16th July, after an exceptionally successful performance at the Petrovaradin Fortress. They are coming with a new DJ set with which they will be touring the biggest festivals in the world such as Lollapaloza and Bonaroo! Hailing from Hackney, London, this ultimate hit-making quartet took the global scene by storm in the last two years. Rudimental are regarded as one of the most-wanted music collectives today, attracting the likes of Jay Z, Emeli Sande, John Newman, and Ed Sheeran with whom they’ve shared an American tour recently. Rudimental are also owners of the prestigious Brit award, and are first place at the UK top list with their album “Home”. The album has enjoyed multi-platinum status in several countries in the world, with absolute radio hits like “Waiting All Night”, “Not Giving In”, “Free” and “Feel The Love”.

Another bestselling attraction coming to Jaz beach on 16th July is the hit duo Sigma (Ʃ) from England. They reached first place at the British list of top singles twice last year, thanks to colossal hits “Rudeboy”, “Changing”, and “Nobody To Love” – the video for which seems as the perfect track for the summer Exit Adventure. “Nobody To Love” also brought them two nominations for the Brit awards this year, confirming their contemporary sound. The list of Sigma’s collaborators contains performers like Kanye West, Paloma Faith, Eric Prydz, Elie Goulding, Kiezsa and many others. “Higher”, their newest hit single with guest appearance by English singer Labrinth, is climbing the charts and serves as harbinger for Sigma’s new album “Life”.

The plethora of the biggest hits in the last few years wouldn’t be complete without the full-blown anthem “Afterglow“ and its creator Mark Wilkinson, whose set is scheduled on Saturday, 18th July! The DJ and producer from London dominated the British dance singles list with his album “Lazers Not Included”. He remixed tracks by Gorgon City, Chase & Status, and Example, and is author of the indispensable club version of “Sing” by Ed Sheeran.

Tickets for EXIT, Sea Dance festival, as well as tickets for full EXIT Adventure, combining both Exit and Sea Dance festival are available at Exitfest.org. Plenty of additional packages that include travel and accommodation options can be found at Exittrip.org.