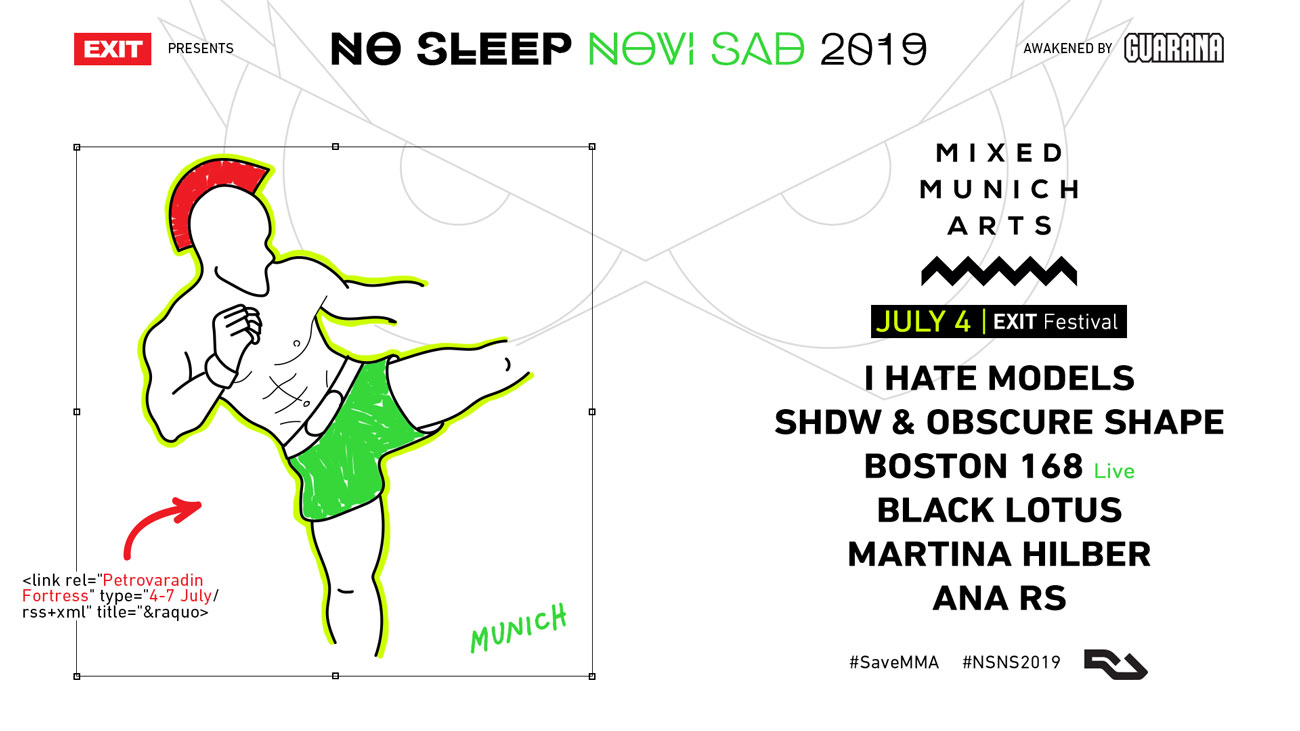 Following closely the colossal announcement regarding this year’s mts Dance Arena, with a lineup consisting of legendary names and stars of the new generation, including Carl Cox, Paul Kalkbrenner, Amelie Lens, Charlotte de Witte, Jeff Mills, Peggy Gou, Maceo Plex and Boris Brejcha, EXIT has announced the first chapter of the sleepless program of No Sleep Novi Sad Stage which has never been more popular! The fascinating techno club MMA – Mixed Munich Arts, located in the engine hall of a former powerplant, with the ceiling 37 meters high, has hosted some of the greatest electronic artists in the world today and served as a multi-purpose cultural center of the Bavarian capital.

Unfortunately, the club is facing shutdown, thus an online petition to save MMA is currently being signed by thousands, and the legendary No Sleep Novi Sad Stage of the EXIT Festival, known for its concept of cooperation with the leading clubs of the world, will join the good fight to save one of the most recognizable European clubs! On Thursday, July 4, under the slogan #SaveMMA and upon invitation by the No Sleep family, many friends of the club and some of the most wanted techno performers in the world will heed the call, including I Hate Models, SHDW & Obscure Shape and Boston 168. They will be joined by the club residents, Black Lotus and Martina Hilber, as well as Ana Rs Montenegro!

After the brilliant performance of I Hate Models at the recent No Sleep Festival in Belgrade, the number of voices calling for his EXIT performance tripled and the mysterious Frenchman will arrive to the fortress on the first night! One of the most talented producers of today, he exploded on the world scene with a furious, cathartic sound that the world discovered through his Depeche Mode remixes, while his tracks are listened to by millions!

Just like I Hate Models, the German tandem SHDW & Obscure Shape have quickly built a firm core of loyal followers, thanks to their hard sound with dramatic and trance moments. The very title of their label, “From Another Mind”, implies that they are thinking outside the box. One of the results of this harmonious, but strong techno symbiosis is the award for the “Best New Artist” by Groove Magazine in 2016.

The strength of a duo, in a 90-minute live performance, will also be shown by the Italian acid techno explorers, Boston 168, whose work was recognized by Ellen Alien, the boss of the universally respected Bpitch Control label, also known as the place where Paul Kalkbrenner started his career.

After winning the hearts and minds of the audiences with her intense sets in famous clubs such as Griessmuehle, Suicide Circus and KitKat, multimedia artist and Berliner Black Lotus is expected by many to take the scene by storm, if her recent EP “Resilience” is anything to go by.

The strong combat lineup will be rounded up by the member of the MMA family, Martina Hilber. The Fortress will also see the new Montenegrin hope, Ana Rs, after two well-received performances at the No Sleep Stage of Sea Dance Festival!