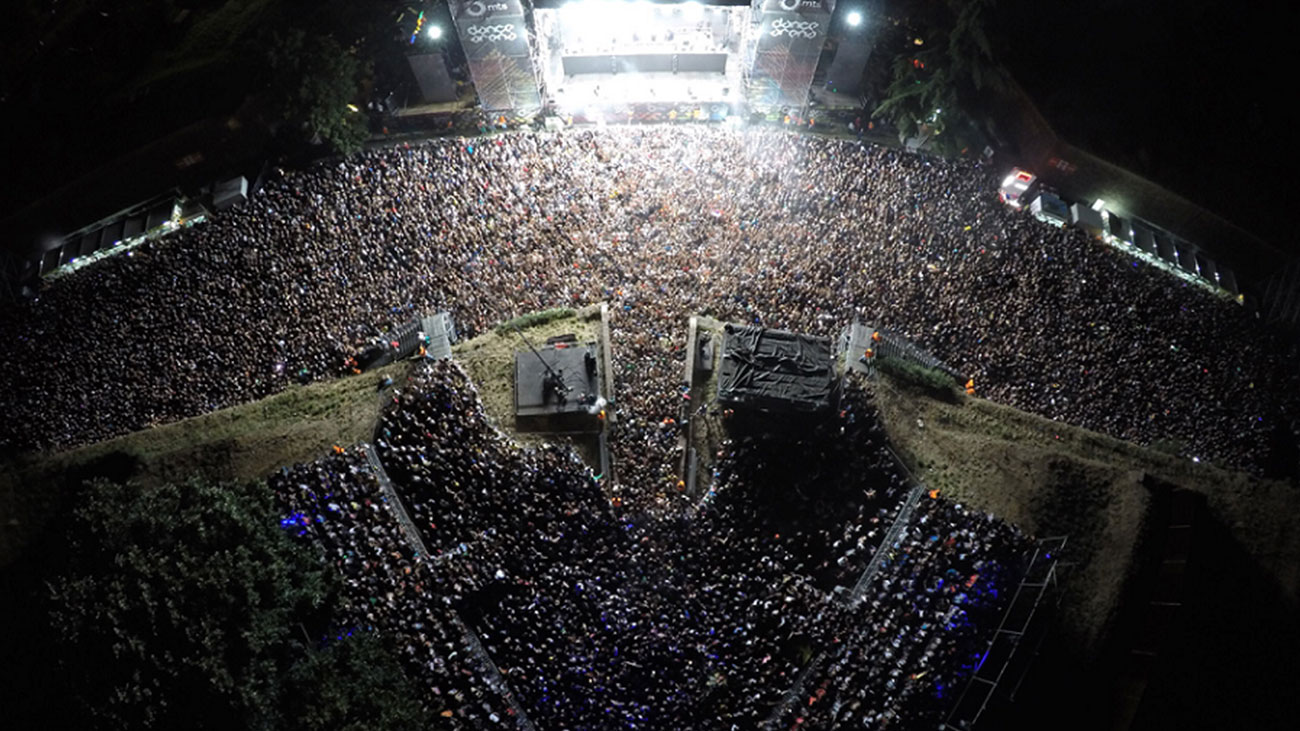 Exit festival’s 15th birthday commemoration party on the second night was even more intense with 47.000 visitors from all six continents, which is on the cusp of the current record at the Petrovaradin fortress from 2007, and tonight it’s expected to be broken! The absolute star of the evening was the world DJ number 1 Hardwell who filled the extended Dance Arena to the brim, followed by fireworks and top notch lights and projections especially designed for this performance. The young Dutchman spoke all the time in fluent Serbian, shocking everyone with his wide-ranging vocabulary, powerful messages followed by a euphoric set and a huge Serbian flag that he brought himself! The award winning British singer songwriter Tom Odell with a piano on the centre of the stage, after last night’s touching performance by Emeli Sande, held one more emotionally packed concert, in the spirit of this year’s slogan “Share love”. True musical pilgrimage on the main stage was offered by the authentic rock’n’roll icon Lemmy Kilmister who along with the group Motorhead held a lesson for all new generations of guitar bands with praise for the energy of the audience at Exit’s main stage. The importance of this for other performers is witnessed by the fact that bands from the Explosive stage all came down one by one to the main stage to listen cult hits like „Ace of Spades“, „Metropolis“, „Rosalie“ and „Doctor Rock“! By the end of the concert, Lemmy used his chance to congratulate the first 15 years of Exit in front of tens of thousands of fans, with a remark that four decades passed in a blink of time for them.
The X-Bass program last night was led by the jungle bard Goldie who celebrated 20 years since the release of the most influential bass album of all time at Exit, the title of which also best describes his performance – “Timeless”! The packed upper city of Petrovaradin and the Fusion stage was shaken up by the riffs of Eyesburn, the Croatian turbo-rock attraction Brkovi, the charming band Zoster, while the No Sleep Novi Sad stage featured the exceptionally contemporary electronic duo Clockwork & Avatism. The way true hard-core stars do was shown by Terror, headliners of the Explosive stage, while the crowd and the epic atmosphere flowed to all others parts of Exit, from the Guarana AS FM, which was so packed that it couldn’t be reached, all the way through from OTPleši Latino to the constantly full Urban Bug stage!

Tonight at Main Stage of Exit one can expect the performance of one of the most sought out singers of today John Newman, the interest for which is at an all-time high, so visitors are advised to come to the fortress as early as possible and take their place because a record number of visitors is expected at the Petrovaradin fortress tonight! The ultimate star of the evening will be the famous revolutionary and activist, local audience favourite, Manu Chao who is coming to the fortress with his bands La Venture. At the mts Dance Arena the world DJ number 1 is coming, the absolute star Martin Garrix, after whom the Chicago house star MK will perform next, then Marko Nastić and Francesca Lombardo. At the main stage, X-bass stars Hannah Wants, Just Blaze, and Hudson Mohawke will contribute to the third birthday night and make it one to remember! The stars of the Fusion stage will be the Dutch alternatives Paceshifters, as well as KKN and Feud, while the Explosive stage will be shaken up by the thrash metal-heads Nuclear Assault. The stars of the Future Shock stage will be the Croatian indie rock attraction Jonathan, while the No Sleep Novi Sad stage expects a visit from the famous Belgrade club Drugstore, with MORD label’s flagships like Charlton, Sleeparchive, Bas Mooy, Radial and the Novi Sad producer Lag.

Members of Motorhead thrilled with local food and girls!
Members of Motorhead spent a break in their tour in Serbia, and by the words of the hosts they couldn’t separate their eyes from women! Members of the band, Lemmy, Mikkey and Phil were literally fascinated by Serbian women and where always buzzing in and out of the sight of their hosts in an effort to contact, as they say, true beauties that were never before seen elsewhere! The famous musicians were very satisfied with the complete experience in our country, and one of the interesting thoughts is that at the very beginning they wanted to pick their food, but by the insistence of their hosts, they tried Serbian dishes, especially barbeque, grind meat, etc. after which they definitely decided to stay with their choice! Lemmy is also very interested for the Petrovaradin fortress, as he inquired about its history, and was thrilled by all the interesting facts that he was told by his hosts. This was all crowned by a spectacular gig in front of 25.000 people at main stage!

Tom Odell greeted his most loyal fans at the festival
In the manner of a true great pop star, the headliner of Exit festival, Tom Odell met with a plethora of his most loyal fans. After meeting 10 lucky meet&greet winners in the press centre, and after his performance, loyal fans were cheering for him for 45 minutes at the backstage entrance, and their rallying cries bore fruitful when the young pop singer jumped out quickly to say hello, take photos, and sign records as well as body parts of teenagers that are crazy for him!

Tickets are available in all Gigstix stores until 16h (4pm) after which they will only be available at festival stores at the fortress, for 4.000RSD for a record-setting Saturday. Tickets for the final night are still available for 3.000RSDD, and their final price at the festival shop tomorrow will be higher. Festival shops are at the main festival entrance across the Lovotours building, and by the church below the watch. Visitors are warned to beware fake tickets that are circulating on social networks and the streets at this time.

The record is broken - the most visited night in the history of Exit!