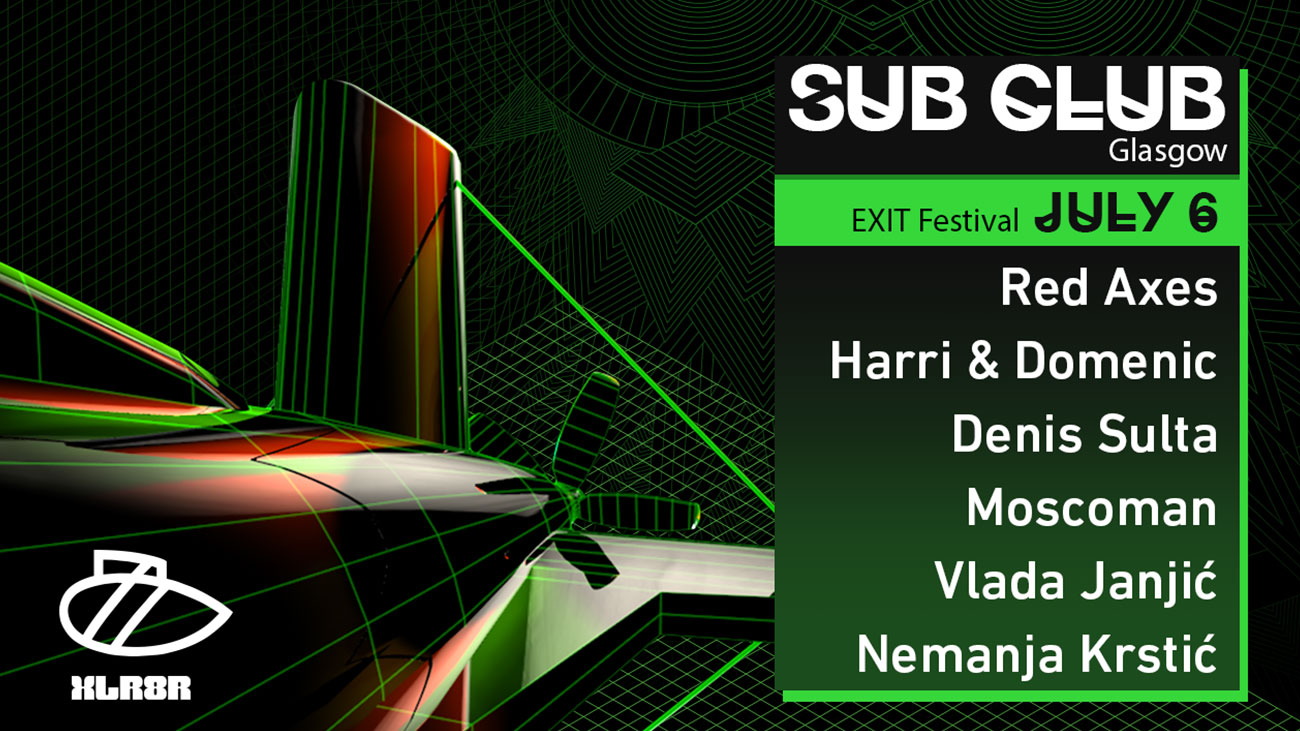 Some of the greatest clubs of the world will present themselves this summer gathered together at EXIT Festival’s iconic stage No Sleep Novi Sad from 5 to 9 July. The lineups have already been announced by the Brussels’ techno heavyweight Fuse (July 7), London-based Corsica Studios’ club-night Avant Garde (July 8), and Parisian 24-hour mainstay Concrete (July 9). The time to releveal their cards has come for the true jewel among UK clubs, the famous Sub Club from Glasgow, which is celebrating an absolute record at the club scene – 30 years since they first openned their doors. Apart from Novi Sad, the special XXX tour will also hop over to London, Berlin, Barcelona, Porto, Oslo and other, carefully selected destinations. The Scottish submarine will bring some of that Weegie charm and its rich history to EXIT’s mind-blowing venue Petrovaradin Fortress, where they will emerge on Thursday, July 6th. They will be represented by their legendary duo Harri & Domenic, whose Sub Culture club-night has been going on every Saturday for the past 25 years, which makes it the longest running residence in the world! Under the steady hand of these two captains, crew will be joined by their friends from Tel Aviv, the venerated rave-rock duo, Red Axes, as well as the mysterious producer and “Disco Halal” founder, Moscoman! The position of first mate deservedly falls to Denis Sulta, the young rising star from Glasgow and the DJ who won so many accolades in the previous year, including the Best Breakthrough Producer, while debuting at the super-high, 26th place at the Resident Advisor list! Local support for such a squad will include the experienced pioneer and one of the leaders of the scene, Vlada Janjić, as well as the talented young house producer, Nemanja Krstić.

Just like Sub Club is known by their stylistic depth, Red Axes cannot be placed under a specific genre or style, apart from their own, which is a trait of the greatest acts. For some, they are a post-punk band, while for others they are a DJ tandem whose sets are making minds explode, while some media even calls them “the catalyst of the rock’n’roll and rave revolution”. Dori Sadovnik and Niv Arzi, under the Red Axes banner, release for great labels, like “Hivern Discs”, “Crosstown Rebels” or “Permanent Vacation”, and their long-awaited album, “The Beach Goths” is promissing to be a true psychedelic summer record, making them the perfect soundtrack for the rave Summer of Love at EXIT! One of their top collaborators, also hailing from Tel Aviv is Moscoman, the music producer behind underground hits on Correspondant, I’m a Cliche, Eskimo Rec, and the curator and owner of the new record label, Disco Halal. His sound takes in elements of techno, new wave, house and blends them with the sounds of his native Middle East, in a slow-burning mystic dance sets.

No strangers to eclecticism and deep musical dives into so many unforgettable nights at 22 Jamaica St. are also James Harrigan and Domenic Capello, Subbie’s own iconic duo Harri & Domenic.  No strangers to the studio, both are always releasing and working on one off edits, remixes and under the counter releases, under various aliases and for labels big and small. From Daddy’s Favourite to 7th Sign, they have pedigree beyond their peers and a history to match their years in the game. And the legacy is secured with such a stellar talent of Denis Sulta. Make sure to remember his rocketing entry into the realm of the big lads, as before you know it, he too will be referenced as one. Continued praise and support from fellow DJs and producers such as Jackmaster, Annie Mac, Skream, Four Tet and Optimo have all aided Sulta, and made his incredible singles “Nein Fortiate” and “It’s Only Real” into almost instant anthems whose life-span at the dance-floor already looks near-eternal.

No Sleep outdoes itself this year in its greatest year ever!

The No Sleep Novi Sad stage will once again take the EXIT audience to another world-famous club every night! After previous #NSNS nights were visited by Tresor, Nitsa, Concrete Grelle Forelle, Drugstore and 20/44, this year the list includes Sub Club from Glasgow, Fuse from Brussels, Avant Garde from London and Concrete from Paris. After Belgrade, Barcelona and Vienna, the No Sleep events happened in London (Corsica Studios), Brussels (Fuse), and Glasgow (Sub Club), and performers at No Sleep parties in the capitals of the world included Honey Dijon, Fort Romeau and Jennifer Cardini. On Wednesday, July 5, “day zero” of this year’s EXIT, No Sleep will take over Dance Arena as well, with the help of Jeff Milss, Ellen Allien, Paula Temple & Rebekah, Lag b2b UVB and many others. This year, there will be a first sea edition of the No Sleep stage, at the Sea Dance festival. There will be performances by Berghain residents, Etapp Kyle and Kobosil, Amelie Lens, Space Dimensions Controller, South London Ordnance, Filip Xavi, Insolate, TKNO and many others!

EXIT Summer of Love continues: Over 20.000 people united by the sound of the Revolution