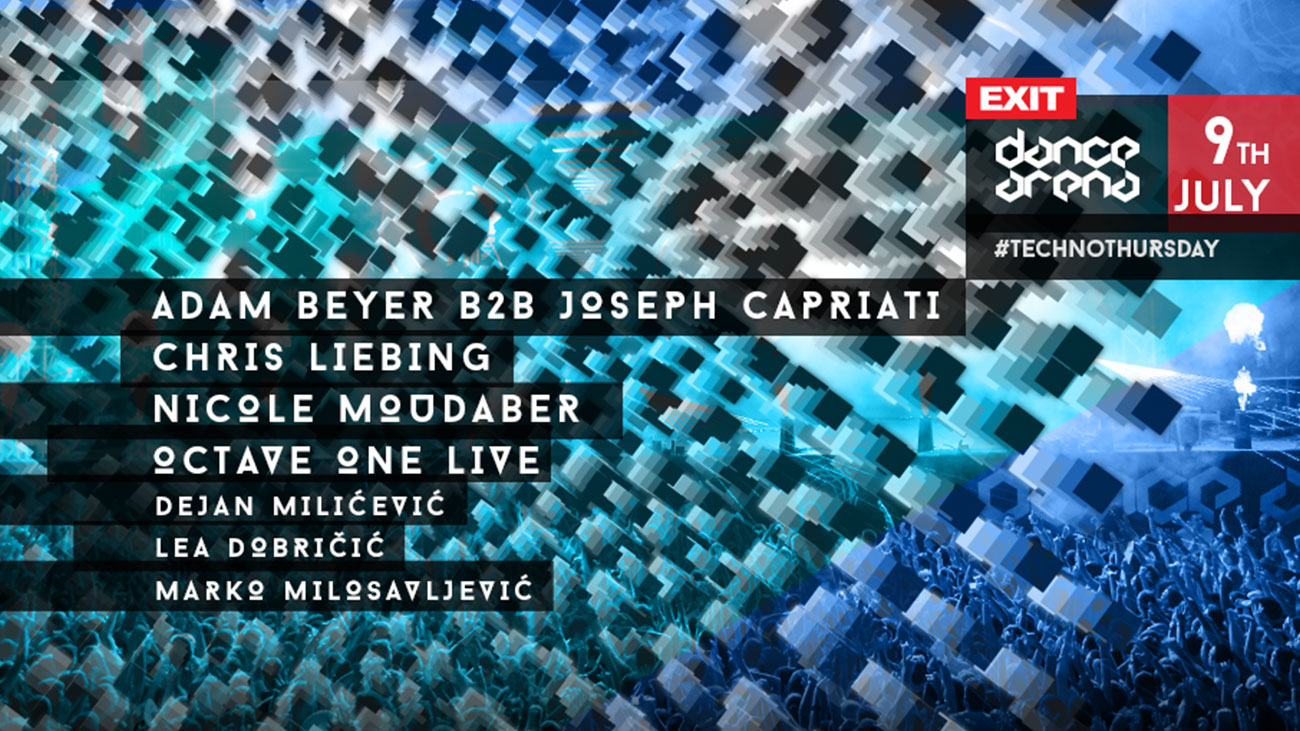 After revealing the first names for EXIT 2015, Motörhead and Eagles of Death Metal, coming up next are the names for the planetary popular mts Dance Arena. The 15th anniversary of EXIT Festival is set to be the biggest one yet, with numerous surprises as well as (un)expected live acts. The intro for this year’s Dance Arena’s superb program is evidenced by the reveal of acts for “#TechnoThursday”: electronic music greats Chris Liebing and Adam Beyer who plays a special B2B set with ‘Drumcode’ regular Joseph Capriati, as well as cult tandem from Detroit, Octave One, and the wonderful Nicole Moudaber. Representing the local scene are Dejan Milicevic, Marko Milosavljevic, Lea Dobricic. Together they will prepare the craziest opening of the 15th Anniversary of EXIT Festival, one that will not be easily forgotten!

Tickets for EXIT Festival are currently priced at £89/ 110 € +b/f. The quickest fans to purchase a ticket will also get a free ticket to Sea Dance Festival, held from 15th to 18th July at Jaz beach, Montenegro, as part of our special Xmas offer. The number of these tickets is limited, so only the quickest of the quick will be able to purchase tickets for EXIT and SEA DANCE festivals with a whopping 35% discount.

The only true techno Viking, the Swedish producer Adam Beyer is part of the famous second generation of great European DJ stars. Both celebrate two decades of hard work next year, which is fitting since they both enjoy being at the absolute peaks of their careers. Since publishing their furious single “Drum Codes 1” in 1995, then founding the “Drumcode” record label in 1996, Beyer changed the techno scene forever, and continues to dictate trends that popularised this genre to the world stages. An equally impressive list of festivals this year will be rounded up by Beyer’s third return to Dance Arena, but this time he brings with him long time friend and label cohort Joseph Capriati. They will be playing a very special B2B set on the Dance Arena this year and really starting the party in style.

The charismatic German producer Chris Liebing has been one of the leading names in the techno scene for over 20 years, lauding a spotless reputation and heroic status among the audience and colleagues alike. Known for being one of the first ones to accept numerous technological innocations, he raised DJ performances to a new, practically “live” level by constantly using four channels while simultaneously creating new remixes in front of the audience. The results of his work inspire awe in his colleagues all over the world. Liebing recently finished two remixes for the American hit-maker Moby, and his travel calendar is still considered one of the craziest ones in the music scene. This year alone he visited Tokyo, New York, London, Beijing, San Francisco, Mexico City, Detroit, Buenos Ayres, Mayami, Amsterdam, Berlin, and Barcelona. The crème on top was Ibiza, where he headlined parties organised by stars like Richie Hawtin, Marco Carola, Loco Dice and Sven Vath! His list of achievements become even more impressive when talking about festivals: Tomorrowland, Time Warp, ADE, Awakenings, WMC, Mayday, BPM, Movement, Hyte, Monegros, Electric Zoo and Nature One. Next summer, though, his long-time wish will come true: it’s time for his premiere performance at Dance Arena!

The techno tandem Octave One stemmed from the very heart of Detroit, and is made up of brothers Burden, Lenny, and Lawrence. The authors of the tremendously successful hit single “Blackwater,” the Burdens are also the publishers behind the biggest techno hit of all time, “Jaguara” by DJ Roland as well as numerous other techno classics. The foundation of the scene in Detroit is their label “430 West Records.” Octave One are famous for their complex live performances, their original sound that can only be fully experienced live, and best of all for the sound of Detroit that’s so different and rich. After their excellent tour last year, Octave One’s first time at the Petrovaradin Fortress in Novi Sad next summer, from 9th to 12th July, will surely leave a permanent mark on special anniversary of not only the Dance Arena, but the EXIT Festival as well.

Nicole Moudaber is a DJ and producer hailing from Lebanon. In 2009, Carl Cox described her as “the most underrated DJ” to DJ Magazine, which helped to launch her career. The irrepressible techno maven’s debut album Believe was Number 1 for a month on the Beatport techno, tech house, and deep house charts. Moudaber has teamed with techno notables such as Carl Cox, Adam Beyer, etc. and she launched MOOD Records imprint in 2012, ensuring fans a steady supply of the drum-fuelled electronic goodness they crave.

Now recognized as one of the principal profiles in techno, Joseph Capriati has established a reputation as a universally popular and in-demand talent. A naturally charismatic DJ with a back catalogue of standout productions, Joseph is an instinctive performer with a genuine enthusiasm for entertaining; marking him out as a leading light amongst the next generation of international techno headliners whose musical magnetism makes him and a firm favourite with club crowds across the world.

World No. 1 DJ duo Dimitri Vegas & Like Mike to bring a spectacle for the great EXIT finale!