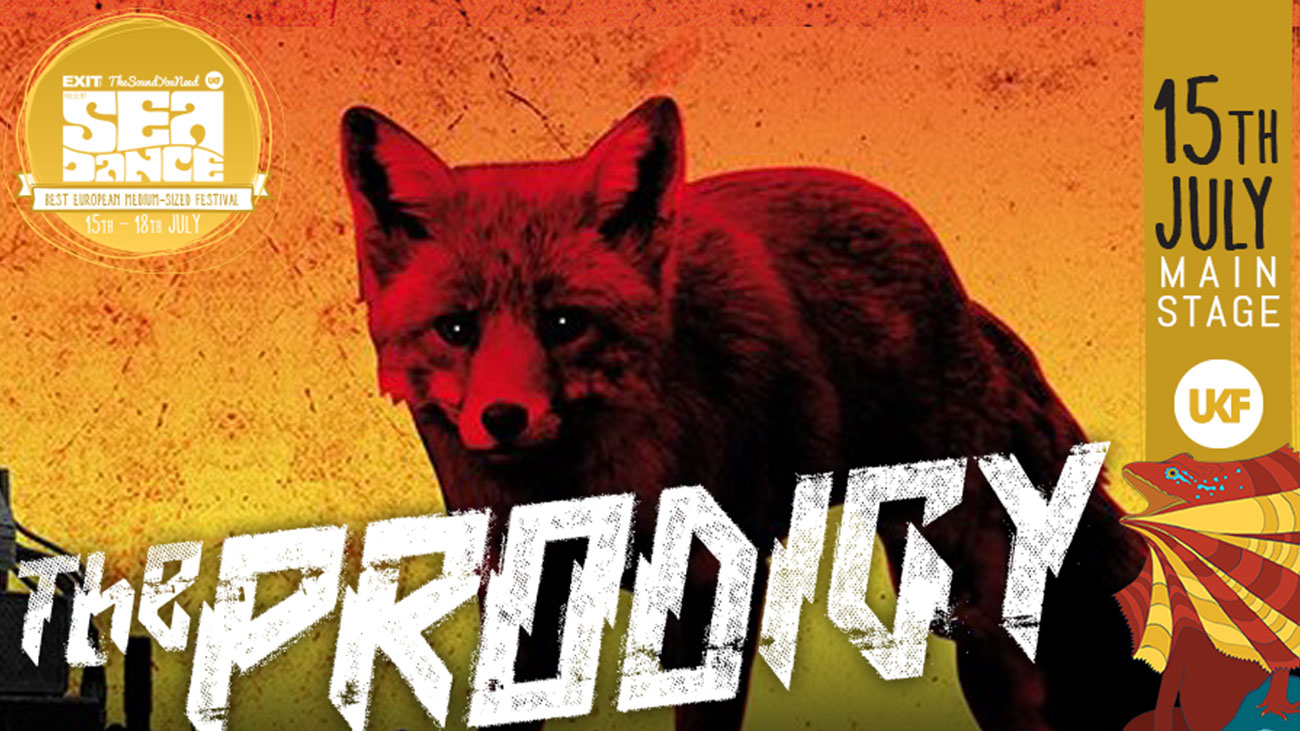 The most influential electronic band in the world, The Prodigy, will perform at Jaz beach for the sea chapter of the EXIT Adventure on Wednesday, 15th July. They will embellish the celebration of EXIT Festival’s 15th anniversary this year, as well as Sea Dance Festival’s recently awarded historic title of Best European Festival. Their premiere performance at Jaz is also a world exclusive first for the Balkans, because The Prodigy are going on an album-promoting world tour only at select biggest European and worldwide festivals.  The 6th studio release named “The Day Is My Enemy” is coming out on 30th March, and serves as a follow-up to the “Invaders Must Die”, which peaked at 1st place at British album lists for the 4th time in a row. Prodigy’s rich and quarter-century-long musical career touts over 25 million albums sold worldwide, and their signature live acts are known for the mass euphoria they produce.

Sea Dance festival, as part of the grand Exit Adventure, will go head to head with the biggest festivals worldwide where The Prodigy will be playing as well. These include the British giants T in the Park and Isle of Wight, the massive German events Rock Am Ring and Rock Im Park, the Australian Future Music, Belgian Rock Werchter, Spanish Benicassim and many others. The Prodigy broke Exit Festival’s Main Stage attendance record with over 40.000 fans in 2013, and are expected to set a new record at their first performance in Montenegro at Jaz beach, after Madonna and The Rolling Stones.
The Prodigy core is comprised of Liam Howlett, Keith Flint and Maxim, who are backed up by guitarists, drummers, and other musicians at live shows. The debut single „Charly“, found its way to the top 3 most listened tracks in Great Britain. It perfectly lay the groundwork for their debut album “Experience”, which was one of the ten best albums in Britain that year. Everything changed with one of the most important albums of the 20th century, „Music for the Jilted Generation“. Entire generations grew up with hits like „Voodoo People“, „No Good“, „Their Law“, „One Love“ or „Poison“. The next album „The Fat of the Land“ broke into American markets and shot up to 1st place at both British and American album charts, thanks to hits like „Firestarter“, „Diesel Power“ and the indispensable „Smack My Bitch Up“ and its controversial video.
The next two albums „Always Outnumbered, Never Outgunned“ and the mentioned „Invaders Must Die“ reach more 1st place marks at top charts worldwide. This enticed The Prodigy to create their Warriors Dance festival in Japan, only to have it take place at the famous Milton Keynes in front of 70.000 fans next year. All of this was followed by an excellent concert album and the DVD/Blu-ray release of „World’s on Fire“. Two editions of the Warriors Dance were carried out in Serbia, at Kalemegdan in Belgrade in 2012, and Exit Festival in 2013! The story of the huge after party in backstage is still widely talked about, when famed Skrillex played sets in the rooms behind the stage after the performance, while Liam, Keith and Maxim had fun with friends from all over the world! It’s time for their first, historical performance in Montenegro, as well as new records for the Exit Adventure, and the unforgettable stories to be made for the band and visitors from all over the world who are coming to Jaz!

Martin Garrix, Tale of us and Dixon adding up to the strongest ever MTS Dance Arena lineup!