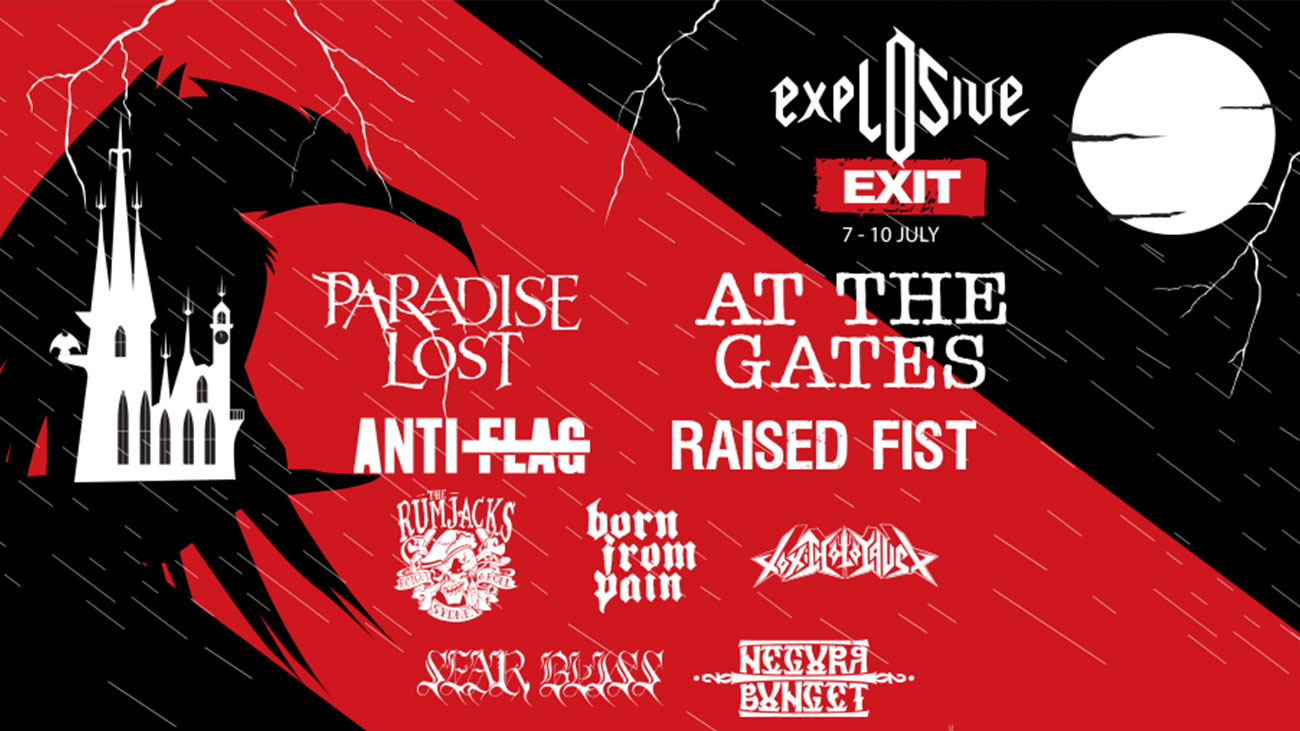 One of EXIT Festival’s favorite stages, the legendary Explosive Stage, brings to the Fortress 30 most furious hardcore, metal, and punk bands from around the world! The explosive army will be lead by the controversial punkers Anti-Flag, as well as one of the most powerful Swedish hardcore bands, Raised Fist. Metal giants, doom/gothic sound pioneers Paradise Lost will be headlining the stage on the third day, whereas the major spot for the final day of the festival is reserved for the pioneers of the Gothenburg metal scene, At The Gates. Explosive Stage will also be the gathering place of piledriving riffs brought by The Rumjacks, Born From Pain, Toxic Holocaust, Sear Bliss, Negura Bunget, and many more! The army flying the [email protected] flag is now even stronger, including the previously announced The Vaccines, Bastille, Tinariwen, Cock Sparrer, The Black Heart Rebellion, Tuber, Kensington, and many others!

The very opening of the festival is reserved for some of the best bands from the world, regional and local punk scene, marking the 40 year anniversary of the punk sound! The cult American anti-establishment band Anti-Flag will be joined by the Sydney-based Celtic punkers, The Rumjacks. The Australian fivefold are renowned for their authentic sound, representing a mix of traditional Celtic music and heavy punk riffs, loaded with ska and reggae rhythms and melodically chanted choruses. The same day, the stage will welcome local punk veterans Mitesers, as well as the hardcore punk act Vox Populi, known for their engaging lyrics and an unstoppable energy. Support to the stage also comes from Montenegro, as the punk rock act Punkreas will also be performing during the same evening.

Europe’s leading hardcore fury, the Swedish band Raised Fist will head the Explosive program on the second day of the festival, presenting their sixth studio album “From The North“, which they had worked on for a full five years! Holland sends regards to EXIT in the form of one of Europe’s first crossover/metalcore bands, Born From Pain, a furious five with two guitars known for their fast, heavy riffs and aggresive breaks. Sarajevo’s Flatline will present their recognizable style, symbolically named “post-traumatic hardcore“. The complete takeover of Explosive stage is set to be completed by Dishumanity, Belgrade’s street heroes Few Reasons Why, Novi Sad’s melodic hardcore punk band First Flame, as well as Gloves Off from Banja Luka, and local Violent Chapter.

Absolute metal icons, Paradise Lost, will bless the Explosive stage after releasing their fourteenth studio album The Plague Within, but will also play songs from one of the world’s most impressive opus, reminding the audience of their immortal hits! The night of all-out metal will be perfected by the Hungarian Sear Bliss, known for their traditional black metal sound weaved with a very original trumpet sound, which makes for an entirely new, authentic coin. They will be joined by Tibia, who bring their unique melodical fusion of metal and hardcore sound, while the same day, death metal comes in the form of the German Deathronation, the Swiss death metal band Xaon, as well as Serbian Dead Joker who are making a comeback after more than 15 years. The local Downstroy, and Stim from Ludbreg, Croatia will be in charge of the groove metal sounds.

At The Gates, one of the bands who pioneered the Gothenburg sound will be headlining the stage on the final night of EXIT Festival. They will be joined by the undisputed leaders of the underground movement, the metal/punk scene phenomenon and favorites to numerous fans of all extreme subcultures, Toxic Holocaust! The heaviest night earns its reputation thanks to the Romanian concert attraction Negura Bunget, who combine ancient instruments with the black metal sound, confirming the perfection of what Explosive stands for. One of the most respected speed/thrash metal acts of former Yugoslavia, Bombarder will have the special pleasure of performing for fans in front Exit’s most dynamic stage. Arriving from Slovenia are the heavy metalheads – Eastwind, the very same night accompanied by Italy’s symphonic metal attraction Norhod! The Fortress will welcome our renowned death metal band, Amon Din, as well as one of the most perspective bands on today’s local scene, War Engine.

Exit Festival will be this year be held from 7 to 10 July at the Petrovaradin Fortress, after which the Exit Adventure moves to the Adriatic Sea for the third annual Sea Dance Festival, held from 14 to 16 July. Confirmed acts for Exit Adventure now include Ellie Goulding, Wiz Khalifa, Hurts, Skrillex, Bastille, Dimitri Vegas & Like Mike, Stormzy, Lost Frequencies, Solomun, Marco Carola, Robin Schulz, Nicky Romero, Cock Sparrer, Anti-Flag, Dub Pistols, DJ Hype, Andy C, clubs Tresor and Concrete, and many others.

The Prodigy: Exit is our favorite festival, we love Serbia!