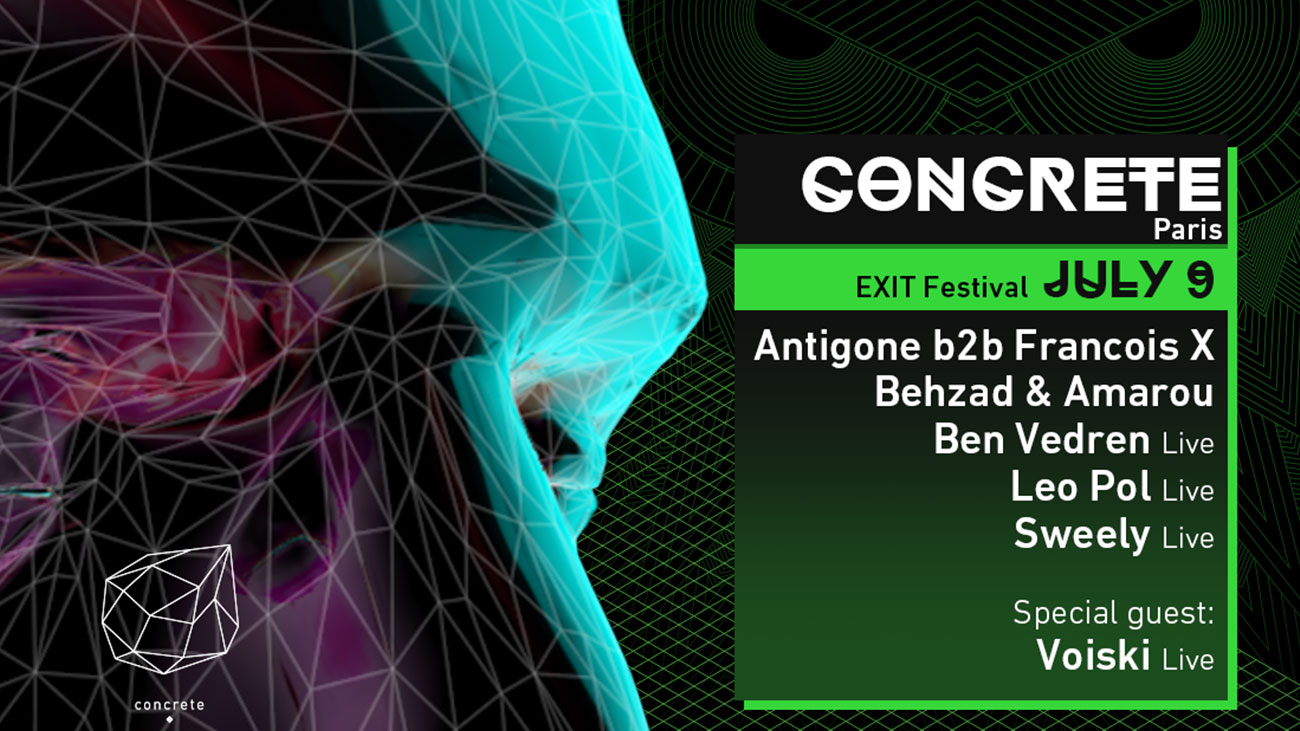 After the already announced killer lineup by the Brussels club Fuse at No Sleep Novi Sad, the legendary EXIT Festival stage continues with the team from the famous Parisian club, Concrete! Last year the Parisians sent a “vanguard” of four, and this summer the Gallic expedition returns with twice the number, willing to turn the moat in front of them into the most famous boat on the Seine once again! In the intensive finale on Sunday, July 9, the City of Light team will be headed by their leading duo Antigone and Francois X, who are very well known by our audience for their furious sets on the fortress last year. But for the rest of their residents, the selector duo Behzad & Amarou, and the three “live” masters on the rise Ben Vedren, Leo Pol and Sweely, it will be their first EXIT experience. Also in “live” set, Concrete’s special guest of the evening will be the lauded Parisian maestro, Voiski!

To witness the 3-hour “back2back” set by the most revered Pariain techno duo in the EXIT’s finale, is nowadays a privilege equal to being there at early b2b’s by Klock and Dettmann! After they had proven themselves as Concrete residents, Antigone and Francois X took some of the best positions at festivals worldwide by storm, and they have been regular guests of the clubs such as Berghain, Fuse, Corsica Studios, Spazio 900 and many others including Belgrade’s Drugstore. Their extremely modern techno sound can be found in catalogues of such labels as Dettmann’s MDR, Glaswegian Soma, popular Token and Pole Group, as well as the current pillars of the Parisian scene, DJ Deep’s Deeply Rooted, Zadig’s Construct Re-Form, Francois X’s Dement3d and, of course, Concrete Music! Another one from only a handful of people who completely revived the French and the international techno scene is the venerated producer, Voiski who made a name for himself with exquisite “live” performances, and is also as a member of the mysterious duo Polar Intertia. His futuristic sound is published by L.I.E.S, Dekmantel UFO, Russian Torrent Versions, Construct Re-Form or Dement3d, while he performed on all the continents except for Antarctica. Aside from his favorite club, Concrete, he regularly returns to Berghain, Fabric, Fuse, Grelle Forelle, Bassiani, as well as Serbian famous 20/44. This summer, the Parisian maestro will finally add Exit to his exquisite list of festivals!

While Paris was waking up the entire European techno scene, a whole new wave of house talents also started playing on the decks of Concrete. Like their influences from Chicago and Detroit, they too surrounded themselves with samplers and rhythm machines and from that point just started playing live instead of DJ-ing. The first among the three Concrete’s “live” masters is the certified Ableton Live trainer Ben Vedren, whose equipment setup is designed especially for the sets who offer maximum freedom and the ability to create music on the spot! Vedren, as a producer, is trusted by his closest associate, the Chicago legend Chez Damier, but also the icon of Detroit techno Carl Craig who entrusted him with the classic “Bug in the BassBin” for the remix on his famous Planet E label. Ben’s music is played by Ricardo, Nina, Rhadoo, Raresh, Wink and many others, and he so far performed in Nuits Sonores, Trouw, Tresor, Rex and a lot of other clubs. Joining him is the increasingly popular Leo Pol, whose single titled “You Got the Funk”, published anonymously, started gaining millions of YouTube views, and the record, issued in a very limited number of copies, is reaching hundreds of euros in price on the online exchange. Aside from the residency in Concrete and performances all over France, Leo recently performed in the London mega club Printworks and Berlin’s Watergate, and he recently started a new label, Ille. The youngest in this group of wunderkinds and the newest discovery by the Concrete team is definitely Sweely, a skater from the streets of Paris whose exceptional house music talent is ridiculously lavish and guarantees him a dizzying rise in the next couple of years.

Still, according to many, the real “secret weapon” of Concrete club is their duo of ghetto selectors Behzad & Amarou, whose universal sets cruise effortlessly between house and techno. Years spent in record stores, both in front and behind the cash register, as well as their charm, telepathic connection and true love of music, primarily of vinyl, has already ensured their status of true legends of Paris clubbing and brought them performances in Tresor, Rex, Oval Space, Le Sucre, as well as the invitation of Nina Kraviz to perform at her label launch party at Sonar!

Concrete – a symbol of Paris and a new European institution!

Last summer, when Resident Advisor placed Concrete on the list of 12 best clubs in the world, they titled their unique story: “How Paris got its groove back”. It arose spontaneously, from barely legal raves at various locations which, after a raid, finally focused on a three-deck barge, anchored in the center of Paris. After five years of rapid gain in popularity worldwide, this year the mayor of Paris officially approved the 24-hour operating license for the club, making Concrete an institution of importance for the entire City of Light!

The famous No Sleep Novi Sad stage at EXIT Festival will once again take the audience to another world-known club every night! While in the past #NSNS was visited by such leading clubs as Tresor, Nitsa, Concrete, Grelle Forelle, Drugstore and 20/44, this year, aside from the Paris club Concrete, we are all on the guest list for Sub Club from Glasgow, Fuse from Brussels and the London club duo Avant Garde and Corsica Studios. The lineups for the remaining two nights will be published soon, and after Belgrade, Barcelona and Vienna, this year we can expect new No Sleep events in London, Brussels and Glasgow, but also the recently announced sea edition of No Sleep stage at the Sea Dance Festival!