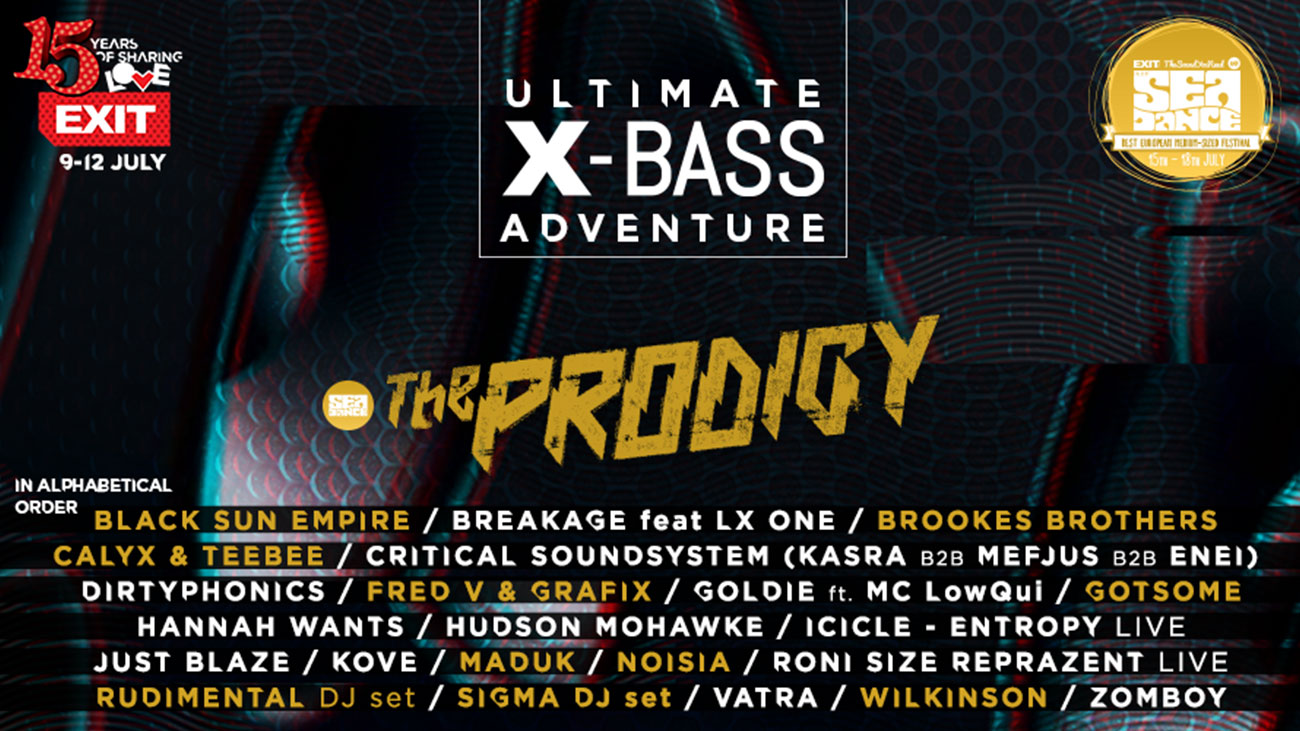 The big list of contemporary bass music performers at the Exit Adventure, i.e. Exit and Sea Dance festivals, has finally been completed! The last but certainly not least additions will boost the programme from the Petrovaradin Fortress to Jaz Beach. Collaborating with the global bass music platform UKF, the Exit X-Bass list welcomes Scottish producer Hudson Mohawke, producers Kove and Icicle from London, and the DJ collective Vatra from Belgrade. The star trio Noisia and Black Sun Empire will make sure that Exit visitors move swiftly from the Petrovaradin fortress to the Bass-Adventure at Jaz beach at Sea Dance, the currently best European festival. Not only that, but the four tandems Fred V & Grafix, Calyx & Teebee, GotSome, Brookes Brothers will also guide audiences along the way, with the help of the officially best young drum’n’bass producer Madik. Upon adding the new names to the already confirmed list of Exit and Sea Dance performers, who represent a wide breath of bass music styles, like The Prodigy, Rudimental, Zomboy, Just Blaze, Roni Size Reprazent, Goldie ft. MC LowQui, Dirtyphonics, Sigma, Wilkinson, Hannah Wants, Breakage ft. Lx oNe, Kasra, Mefjus, and Enei, the result is an ultimate X-Bass Adventure, and the greatest bass programme in entire Europe this year!

The new star of the bass scene in London, James Rockhill aka KOVE, is set to perform at Exit’s Main Stage on 9 July. He releases his work under RAM Records, which is led by the legendary Andy C, and collaborates with the Chase & Status duo. Having released three studio albums, he reached the 30th spot at UK charts with the song “Way We Are”. Meanwhile, his remix of John Newman’s track “Love Me Again” garnered over 5 million views on YouTube. The same night at Exit is slated for Icicle, who will present his live concept Entropy at the main stage! Music aficionados see this performance as the future of the DJ profession, and it will be helped by Immanent VJ, who will follow him closely using modern visuals on screens. This has already received tremendous support from the biggest bass stars like Goldie, LTJ Bukem, Fabio, London Elektricity, Pendulum, Andy C, D-Bridge, and many others. Ross Birchard aka Hudson Mohawke, who will perform at Exit on 11 July, was the youngest contestant at the world DJ championship “DMC” at the tender age of 15! He’s released under Warp records, and has been intensely collaborating as a producer with names like Kanye West, John Legend, Drake, Pusha T and Antony Hegarty. Exit awaits a true audio-visual spectacle on Saturday 11 July with Vatra is a modern phenomenon, originating in Belgrade clubs. For the last four years, they’ve been actively organising the most visited hip hop and R’n’B parties! The DJ quartet – byp_, 50Grass, Фake Casual and Inspektor will pull in all local and foreign caps, shorts, and flammable heat with their slogan “F…ing ace in the house” this year at Exit!

Three-time winners of the Beatport Music award, Noisia, the famous trio from Holland, is set to perform on 15 July at Sea dance festival’s Main Stage! They own three labels Vision, Division, and Invisible, and their music has also been released by Jay Z and Skrillex. It comes to no surprise that they are one of the most sought out acts in the world, with remixes for names like Labrinth, deadmau5, Mark Knight, and The Prodigy. The second night at Jaz beach will welcome the freshest power-boost of the drum’n’bass scene in the world, Fred V & Grafix! Their album “Recognise” was released under Hospital and is still making rounds in the world. It’s been remixed by the biggest names like Rudimental and Emeli Sandé. The exceptionally hot tech-dnb trio from Holland, Black Sun Empire, is coming to Jaz beach on 16 July. They’ve got important experience already under their belts, with performance at stages of the most important festivals like Glastonbury and Lowlands. They own the same-named label, three studio and dozens of compilation albums and singles, as well as remixes for bass giants like Noisia – rightfully making them the bearers of the heavy crown as the pioneers of the scene. The GotSome duo from Bristol are arriving on 17 July, after the success of their single “Vibe Out” featuring grime legend – Wily. The single heralds their new album, to be released under MTA, the Chase & Status-owned label. The very same night will host the Calyx & TeeBee duo, who are still riding high the winds of success from their album “Anatomy”. It is regarded as one of the most anticipated albums in the global drum’n’bass scene in the last few years. The final night of Sea Dance festival will host the most promising young DJ in the drum’n’bass scene – Maduk – the current owner of the title of “Best New Producer” at the biggest bass competition “Drum&BassArena”. The festival finale is set for the authors of the “best record in the world”, as picked by the famous television host Zane Lowe: the famous Brookes Brothers.

Gather your friends, buy 4 tickets for just Exit Festival or full Exit Adventure and you will get a fifth ticket for free! There’s more: all five will also receive Exit Camp passes, free of charge! Tickets for Exit Festival are available from 89£ +b/f, and for Sea Dance Festival at 54£ +b/f. The unique ticket for more than 10 days of Exit Adventure (Exit + Sea Dance), is available for £105 +b/f at THIS LINK. Packages including travel and accommodation can be found at Exittrip.org.