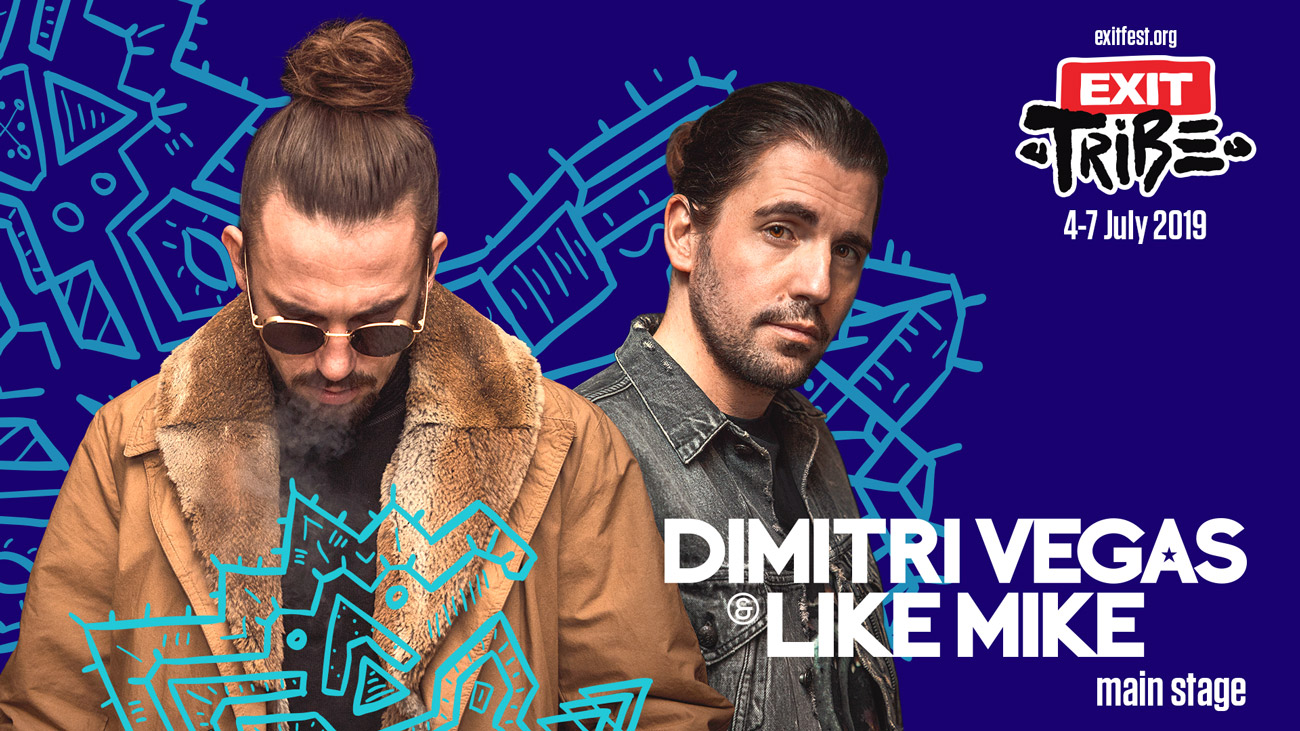 Officially best ranked DJ duo in the world, Dimitri Vegas & Like Mike have confirmed their performance on Exit’s Main Stage, where they will prepare a new audio-visual spectacle on Sunday, July 7! The Belgian duo is returning to the Petrovaradin Fortress after three years, when they put on a show to remember, reaching the full capacity of the mts Dance Arena!

Brothers with a Belgian address and Greek origin have been the best ranked DJ duo on the Top 100 DJs list of DJ mag for years now. Their one first place and four second places on the list mean they left behind names such as David Guetta, Tiesto, Hardwell, Calvin Harris and Skrillex! For years they have been hosts at the famous Tomorrowland and their performances are considered the pinnacle of this gigantic event, while their show in Germany in front of 45,000 visitors is considered the largest electronic event of the decade! They are also holding records in their native Belgium, where they managed to outsell Madonna and U2 with 60,000 tickets sold in only three days.

This year they brought their recognizable “Madness” show and prepared a true “madhouse” for the audiences at Sea Star and Sea Dance festivals. They had such a good time in Montenegro that they continued partying after their performance, joining the crowd at the cult No Sleep Stage, dancing to the beats of the techno-heroine, Nina Kraviz!

Contagious melodies and tracks of this duo have over 800 million YouTube views on their official channel, and EXIT Festival audiences will surely be ecstatic to hear the great hits, such as “Tremor”, “The Hum”, “Complicated” and “Melody”. That last one was the official anthem of the Belgian football team in 2016! Well known for their hitmaking abilities, as well as their experimentation, they have recently published “Bounce”, an ideal festival song and a hit in the making, a collaboration with the planetary loved rapper Snoop Dogg, which proves that these electronic giants have also caught the trap fever!

Other great names, such as David Guetta, Martin Garrix, Afrojack and Diplo have all been looking for a way to get a cooperation going. The brothers have left their mark on official remixes of hits by stars such as The Weeknd, Major Lazer, Calvin Harris and others. Their influence was expanded to other branches of art as well when they gained the opportunity to work alongside some film industry giants. Best example of this is the remix of “He’s A Pirate”, the cult movie theme by Hans Zimmer, for the needs of the last Pirates of the Caribbean sequel!

Dimitri and Michael Thiavos started their joint DJ career as teenagers, and they have become stars in 2009, thanks to the “Work that Body” remix which brought them attention of the great Axwell, who helped introduces them to the world. Today, the festival scenes and the largest stages of the world are their natural habitat and their second home. The great Tomorrowland cannot be imagined without them, as their 2010 performance brought them the title of the residents and the honor to write the festival anthem, even become the stars of the Tomorrowland comic, whose author is Paul Jenkins, also known for his work on Spiderman!

Great interest in EXIT tickets with a discount of 55%!

EXIT Festival 2019 will be held from July 4 to July 7, and currently there is a limited set of EXIT tickets at the price 89£, which is a 25% discount on the final price! The ticket price for the first festival day, when The Cure is performing is 35£. For the same day, the tickets for FAN PIT are also available at the price of 45£, as well as the GOLD VIP daily tickets for July 4 for 90£. EXIT Tickets can be acquired via the official Exitfest.org page.

Yoko Ono and EXIT to celebrate "First World Peace" - 100 years since the end of World War I!