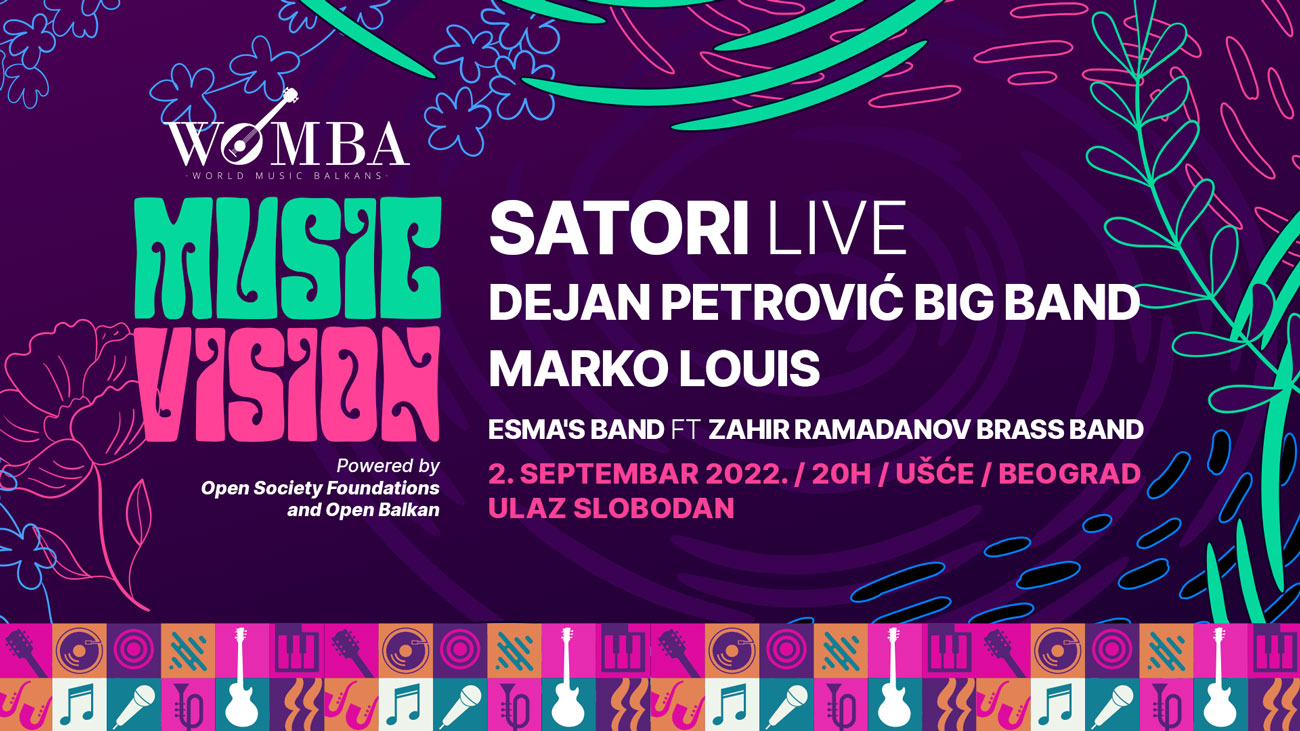 This musical event is part of the premiere of the “Wine Vision” Fair, planned to take place from 1st to 4th September at the Belgrade Fair. The concert is powered by the Open Society Foundation and the Open Balkan Initiative.

The “Music Vision“ concert promotes the authentic sound and energy of the Balkan countries and is brought by EXIT’s WOMBA (World Music Balkans) platform, whose goal is to make the Balkan sound recognisable worldwide. The Balkan region is united by traditional music, which could become a global brand with modern production. The acts who will perform at Ušće have made a notable contribution to this over the years.

After his performances on the main stages of EXIT, which marked the last two editions of the festival, Dutch producer and live act Satori, whose father is from Serbia, is coming to Belgrade. Along with the EXIT Foundation, he produced the special album “Wonders of Vincha culture” for EXPO Dubai 2022, in which he combined electronic music with traditional Balkans songs, including “Vranjanka,“ “Zajdi zajdi,“ “Moj dilbere,“ “Što te nema,“ and “Djelem, Djelem.” He recently released a new album, “Dreamin’ Colours,“ which is presented as a collection of World Music, but also blues, indie electronics, opera, and folk music, with an electronic sound and the influence of Satori’s Balkan roots.

Dejan Petrović Big Bend is an orchestra world-renowned for its performances of Serbian traditional music. The band performed in London, Toronto, Turin, Brussels, Prague, and many other cities, introducing the music of this region to the world. In addition to numerous hits, the Big Band became world-famous for its unique performances of popular foreign pop-rock hits in a Serbian trumpet arrangement.

Marko Louis is widely considered an artist who erases boundaries in music, combining the sounds of soul, R’n’B and pop with elements of Balkan and oriental culture. From the opening beats of any of his songs, you can recognise his unique style, with which he distinguished himself on the regional music scene. He shares this trait with his father, the legendary Ljubiša Stojanović Louis.

Esma’s Band consists of musicians who performed with the queen of Romani music, Esma Redžepova, all over the world. As members of her supporting ensemble, Teodosievski, they held over 3,000 concerts. Esma’s Band is led by Esma’s son Simeon Atanasov, while Zahir Ramadan’s Brass Band will also perform with them at Ušće.

Concert “Music Vision“ is free of charge and open to the public.

The concert will take place as part of the four-day wine fair in Belgrade, “Wine Vision by Open Balkan 2022“, which will bring together the best wine producers from Albania, North Macedonia, Serbia, and neighbouring countries. In addition to the stands of more than 400 exhibitors, the wine potential of the Balkans will be presented at numerous masterclasses, workshops, and special tastings. Numerous wine experts, traders, distributors, Master of Wine title holders, critics, bloggers, and representatives of the most important global media will be guests of the first “Wine Vision” fair.