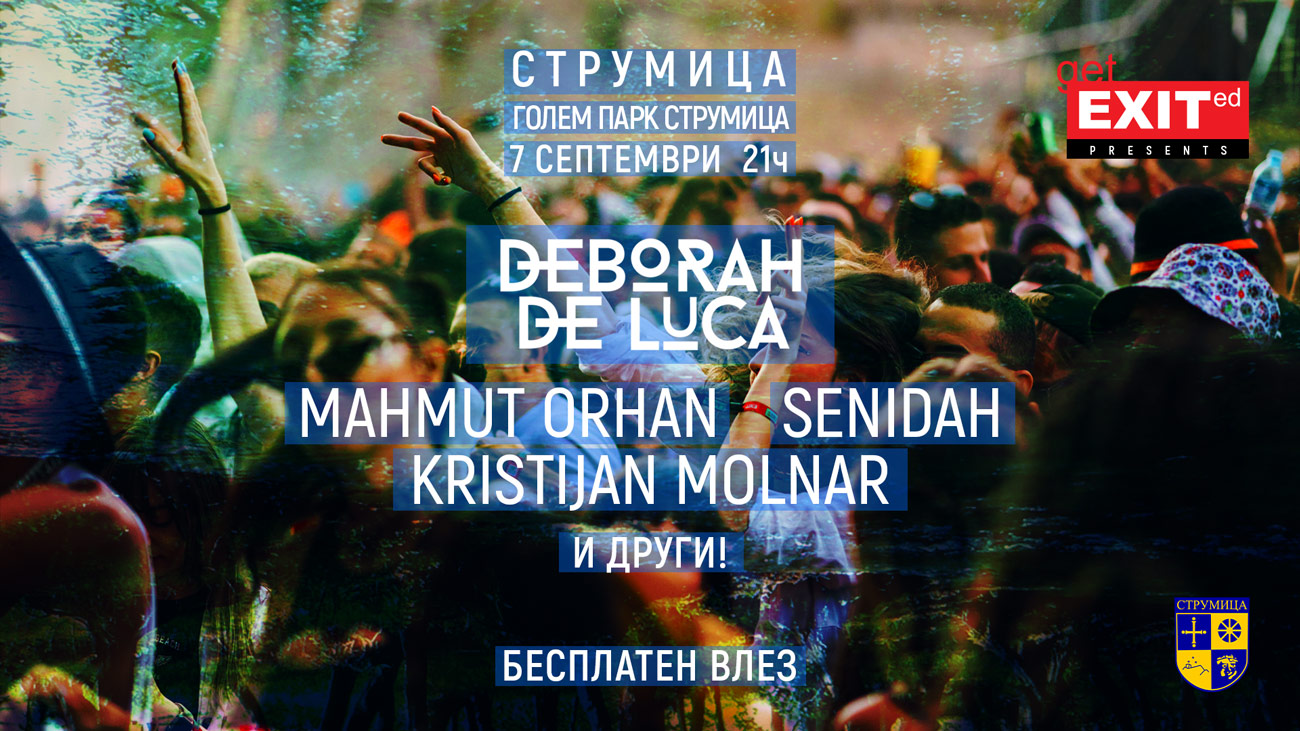 One of the leading Italian techno stars, Deborah de Luca, global hitmaker, producer and DJ Mahmut Orhan, undisputed Balkan trap queen Senidah and one of the most famous regional DJs with an international career Kristijan Molnar, are all coming to the big summer party. More names will be announced soon, and the entrance to this party, which will last as long as nine hours, is free! Get EXITed in the beautiful city of Strumica announces the launch of EXIT’s festival in Macedonia, planned for 2023.

Deborah De Luca, originally from Naples, is one of the leading female techno stars with an army of fans! She recently reaffirmed her hard and energetic techno sound with the album “She Sleeps“, which she released under her own label Solamente Records. She has a few impressive sets under her belt, including one for Cercle in front of the French castle of Chambord, one for the prestigious global magazine Mixmag, recorded on Neapolitan rooftops, known to the world from the “Gomorrah” series, as well as the one for Beatport, at the Diego Armando Maradona Stadium. These sets alone have over 30 million combined views, while Deborah De Luca has nearly two million followers on Instagram! These figures only confirm the choice of the renowned global magazine DJ Mag, which ranked Deborah among the 100 best DJs in the world in 2020! She was introduced by the legendary Pete Tong in the BBC Radio 1 Essential Mix in 2019 as the “techno queen of Naples“. In recent years, Deborah De Luca has gone far beyond the borders of Italy, and now she is bringing her musical experience and charisma to Strumica!

Mahmut Orhan combines deep house, groovy indie dance, and ethno sound, and in 2016 he made a real stir on the music scene with the track “Feel“ (feat. Sena Sener), which has almost half a billion views and streams on YouTube and Spotify today. Mahmut Orhan’s career was launched by his unmistakable talent for making hits, bringing him a staggering one billion combined views. As one of the most promising performers in dance music today, Mahmut Orhan has become a must-see at the world’s leading festivals over the last few years, and he brings his megahits directly from the global charts to Strumica!

The fantastic Senidah has been steadily marching through the local trap scene for the past five years. Her voice is specific and raw, her music simultaneously strong and gentle, while on stage, she radiates incredible energy and fearlessly swims in contrasts, from the fiercest Balkan woman to the vulnerable Slađana. Collaborations with Coby, RAF Camora and Atlas Erotika have set her apart as a chameleon prepared to give the audience everything she has.  Her latest single, “Behute“, is yet more proof of her diversity, and the 28 million YouTube views the song has gotten in half a year are a unique love letter from her audience.

Kristijan Molnar believes he belongs to the category of curious DJs, so his performances are full of fresh and diverse music. The repertoire of one of the leading DJs in Serbia includes melodic and deep techno, twisted disco, NYC house, weirdo-dark, modern wave, bitter beats, sweet soul and other unusual styles, and he promotes such music in his influential radio show, broadcast on the national Radio Belgrade.

Deborah De Luca, Mahmut Orhan, Senidah, and Kristijan Molnar join forces to bring a diverse and energetic sound to the beautiful Veliki Park in Strumica. The Get EXITed party starts at 9 p.m. and will last until 6 a.m.