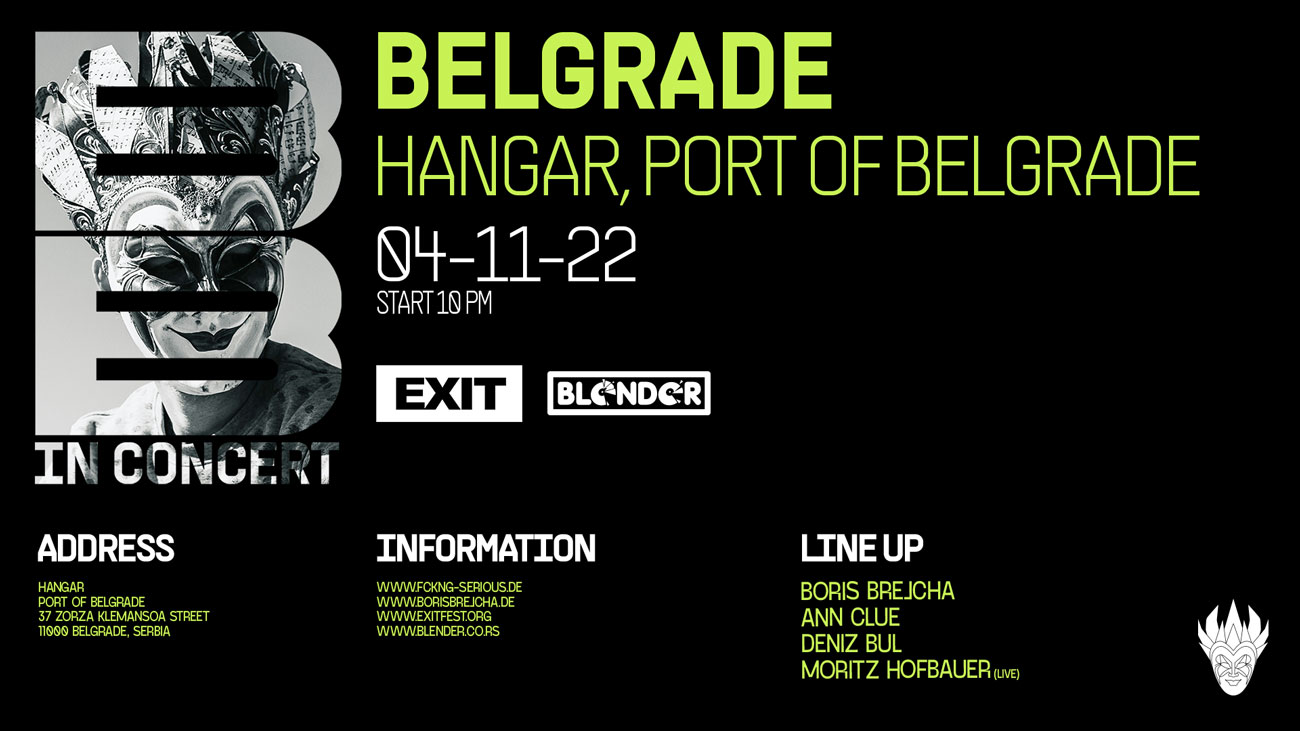 Our capital thus finds itself side by side with Berlin, London, Madrid, Lisbon, Prague, and other major European centres that will host this unique audio-visual spectacle in the autumn. This will be the only opportunity to hear the super popular Brejcha live in the region for an entire year! The big “In Concert” tour brings other representatives of Brejcha’s Fcking Serious label to Belgrade, namely Ann Clue, Deniz Bul, and Moritz Hofbauer live.

One of the capital’s leading electronic music events of the year will take place in the Great Hangar in the Port of Belgrade and is organised by EXIT and Blender. Although ticket prices for the European tour range from €30 to €60, thanks to EXIT’s excellent relationship with Brejcha, the local audience will have a chance to buy tickets for as little as RSD1,490, at a 50% discount compared to the final price. A very limited contingent of tickets will go on sale on Friday, September 23rd at noon on the Gigs Tix website, and we expect the tickets to sell out in less than an hour at that price! The next contingent will become available at 2 p.m. on the website and at sales locations.

In just a few years, Boris Brejcha has distinguished himself as one of the top acts on the electronic music scene. He defined his own genre, naming it high-tech minimal techno, while others often refer to it as the intelligent music of tomorrow. Other performers accepted the genre, and he mastered it to perfection. He showcases his unique musical style on the world’s biggest stages, in front of tens of thousands of fans, and club events where he performs are sold out in minutes.

Inspired by his first gig in Brazil, this absolute favourite of the global audience always performs wearing a “joker” mask, which has become his trademark and brought the carnival spirit into dark sets woven from powerful techno elements and exciting melodies.

Late last year, he released his tenth studio album, “Never Stop Dancing,” which found itself in the 50 albums on last year’s DJ Mag list and consists of 12 tracks dominated by techno and high-tech minimal. This album is followed by this year’s releases “Up Down Jumper, “Club Vibes Part 01, “I Want You, “Club Vibes Part 02,“ as well as the remix of Bodzin’s track “Astronautin.“

The charismatic Ann Clue is Brejcha’s long-time friend and collaborator. She is part of the Fcking Serious label as a co-founder and producer. She has stood out on the global electronic scene with her unique aesthetic, energy, and passion for music and her EP “TRIP.“ She and Brejcha have several joint releases, including “Young And Stupid, “Acid Attack,“ and “Roadtrip,“ as well as numerous performances that they particularly like because, as they say, they enjoy the high-tech minimal harmony. Her deep, dark, and melodic music combined with powerful bass lines has conquered the world, booming from the stages of the biggest festivals such as Awakenings, EDC Las Vegas, EXIT, Time WARP, Sonus, and OFF Sonar.

Deniz Bul is a talented producer and DJ who has followed his mission of giving the world more techno since the beginning of his career. Although he tried his hand at different musical genres, at the age of 20, he ultimately turned to the production of electronic music, organising parties and performances at local clubs, where he met Brejcha; over the years, Deniz developed his musical style, and he joined the Fcking Serious label at the very beginning. Some of the releases that propelled him onto the global scene include the remix of Brejcha’s track “Moondancer,“ which he made with Lea Naomi, and singles like “Vibin, “Limitless”, “Third Dimension,“ and “Fata Morgana.“ His distinct sound consists of progressive, unique bass lines and melodies incorporating vocals. Clubbers worldwide have had the opportunity to enjoy his music selection, energy, good vibes, and the fun he creates on the dance floor.

The newest member of the Fcking Serious family is Moritz Hofbauer, a young musician who stands out with his unique live performances at Fcking Serious showcases worldwide. This multi-talented artist first played the cello in a local orchestra and keyboards in a band. A little while later, he became interested in drums and synthesisers. In the end, he started combining his piano compositions with electronic beats, and his passion for deep house and melodic techno quickly evolved. At the age of 15, Moritz already had his first club bookings, and the release of “In Between“ for Jeudi Records in 2015 marked a turning point in his career. Numerous releases followed, as well as remixes of Township Rebellion, Ben Böhmer and Nils Hoffmann. With the music he creates, he follows his vision of a unique sound that synchronises melodies, art, and clubbing, continuously searching for new pigments to add to his musical palette.

A very limited contingent of tickets, by far the most affordable on Brejcha’s entire tour, can be purchased at Gigs Tix sales locations and online, at a gift price of RSD1,490, with a discount of as much as 50%, while VIP tickets will be available at a promo price of RSD2,490.

The tickets go on sale on Friday, September 23rd, at noon, and we expect this contingent to sell out in less than an hour! The promotional prices will only be valid until the stock runs out, and the next contingent of tickets will be sold at Gigs Tix sales locations and online starting at 2 p.m.