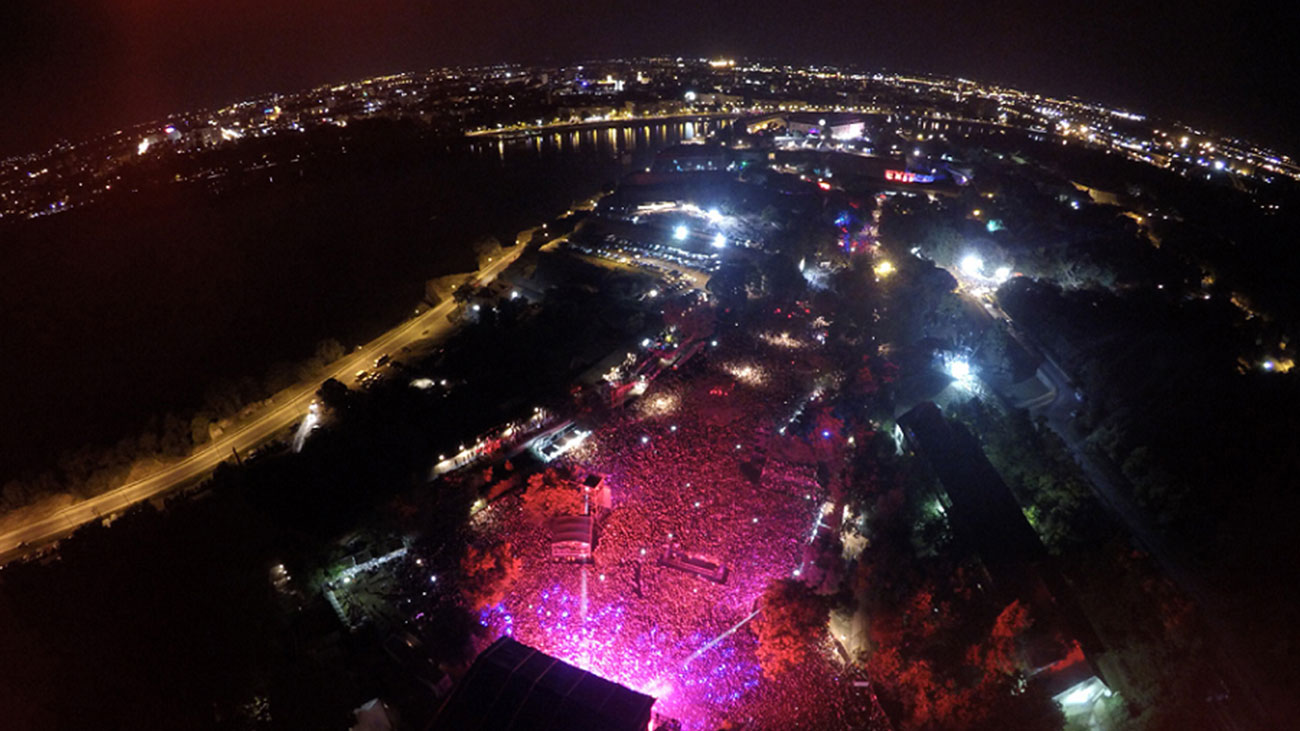 Guys…at our 15th birthday we BROKE A RECORD together, witnessed A MARRIAGE proposal on main stage together (she said yes!!!) and became ONE together! From the bottom of our hearts: THANK YOU THANK YOU AND THANK YOU for making EXIT so special <3 Keep sharing that amazing love and energy you have!!! We will love you again and you will read all about it.

Now… are you ready for our sandy edition on Jaz beach and Sea Dance Festival?!

After four splendid days and nights, this morning around 8 ended EXIT Festival’s grand, 15th birthday. From 9 to 12 July, around 190.000 people entered and exited through the festival gates, making it an official EXIT record in this decade. Due to great interest in the second Sea Dance festival at Jaz Beach, the Adventure is about to break another record by 19 July! After the traditional fireworks, one of undoubtedly best performances began; Faithless, in the special mts Dance Arena takeover of Main Stage celebrated their 20th birthday, with open congratulations to EXIT for its 15th! The electro legends, led by the charismatic Maxi Jazz, and inspired by the band’s first lady, Sister Bliss, presented the biggest light show in the history of EXIT! After a number of hits, including “Salva Mea“, “God is a DJ“, “Music Matters“, a timeless eruption of energy came about when the band performed “Insomnia“, officially the greatest EXIT Adventure hit this year, an award presented to them by the festival. The performance closure came with “We Come 1“ with Maxi’s message to audience from all around the world: “If we want to get peace done, we must become one“.

The birthday bash was completed by hitmakers Capital Cities who asked the organization to join them on stage to celebrate the birthday together, and to sing the planetary hit „Safe & Sound“ together, to an amazement of audience at the crowded Main Stage. Before them, the stage was reserved for the German indie-rock duo Milky Chance who held a majestic performance with a spotlight on the audience chanting their hit “Stolen Dance“! The final night was also marked by electronic music legends’ Leftfield’s live performance at mts Dance Arena, after which came leading set after set until the morning; Resident Advisor’s first-placed Berlin mage Dixon, followed by second-placed Tale of Us. The honor to close the biggest open dancefloor went to Simian Mobile Disco in a special “back2back“ set with Roman Flugel!

The X-bass culmination came with the performances by Zomboy and Critical Soundsystem led by the Russian superstar DJ Enei, who also had a special set at the No Sleep Novi Sad Stage with his fellow colleague Bop, while Fusion Stage welcomed Kolja and Grobovlasnici, Rambo Amadeus, with the special sunrise moments with the audience going to Hladno pivo! In front of the ever-packed Explosive Stage, a harsh performance came by American metal monsters Fear Factory, while the popular Urban Bug stage was closed by Goya & Nataša with Milan Živanov.

Exit Adventure moves to the most beautiful European beach, Jaz, for the second edition of the awarded Sea Dance festival held from 15 to 19 July. The big sand cove by Budva, during four days and nights, will witness performances by the likes The Prodigy, Rosin Murphy, Rudimental, Sigma, Wilkinson, Gramatik, Bondax, Flight Facilities, Noisia, Modestep, James Zabiela, Kim Ann Foxman, Dubioza Kolektiv, Viva Vox, and countless other performers at day and night parties at the Adriatic Sea. Tickets for Sea Dance Festival are available at the festival entrance, at the price of 49,99€.

Here’s what some of this year’s performers had to say via their Twitter profiles:

John Newman:
Thank you Serbia/Exit Festival last night was mind numbing! We broke the record together!!

Roni Size:
Huge thanks to everyone that came to see us at @ExitFestival last night, we love you!

Chris Liebing:
Really happy to be in Serbia at @ExitFestival tonight …playing from 3:30 till Sunrise.. #letshaveagreattimetogether

Tom Odell:
Thank you very much for looking after us exit festival xxxxxxxxxxx

Oliver Heldens:
Yesterday was awesome, I played during sunset at @ushuaiaibiza and during sunrise at @ExitFestival Serbia I had so much fun!

Martin Garrix:
Thank you Exit Festival for this crazy experience, I loved it!!

A staggering 109 DJs for exit’s 15th birthday at the popular urban bug stage!