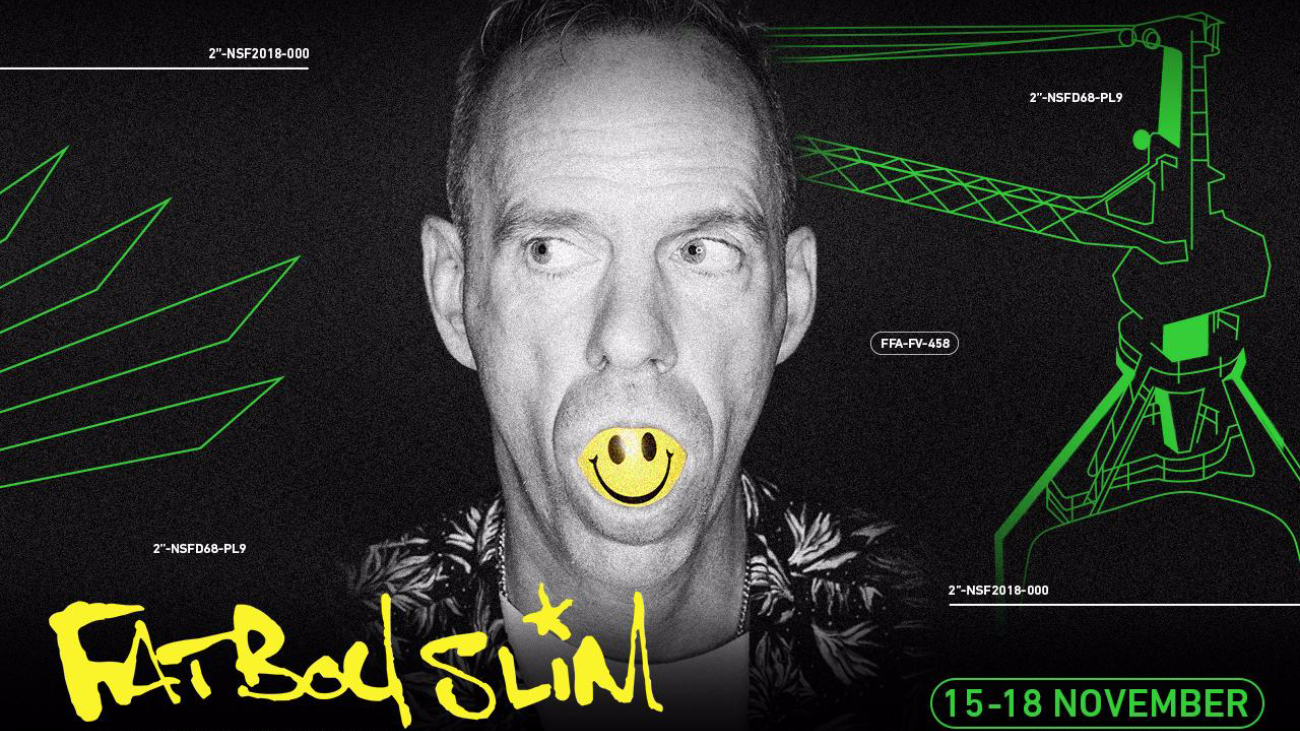 One of the greatest DJs and producers of all time, and a relentless party maker Fatboy Slim will headline EXIT’s whole-new No Sleep Festival on November 15th. This will be an exclusive one-off show simply dubbed as the Warehouse Rave which he describes as “one big intense party with plenty of lasers, dirty lights and smoke machines”! The music selection will traverse from today’s floor killers to classics anthems who are still shaking the biggest crowds around the globe.

Known for his true DJ craft, Fatboy Slim brings in his highly energetic sets a spectrum of sounds from across the whole global rave movement that came about exactly 30 years ago in what was the Second Summer of Love in 1988! Acid synths, Latin percussions, piano rolls, string choruses, epic samples and other pillars that hold the global rave movement, will all come together at a party in a New Hangar, which is a mammoth warehouse in the Port of Belgrade, at the banks of Danube. Adding to the overall vibe, the venue is surrounded by cranes, loading docks, rails and a labyrinth of halls, while located just a mile away from Serbian capital’s central square!

Joining Fatboy Slim on this rave extravaganza will be a back2back duo made of Life and Death’s head honcho and a global electronic music aficionado DJ Tennis together with Berghain’s resident and Berlin’s techno legend Marcel Fengler! This unusual duo recently indulged in a mind-blowing 9-hour back2back set in the Parisian club Concrete, which was showcased two years in a row at a No Sleep stage of EXIT Festival. When asked to describe the sound of this unexpected duo, DJ Tennis replies: “It’s techno but with a twist. Ravey and happy. It’s also acidic, with some electro, it’s fun. Girls seem to like it!”.

Promoted by the team behind the multi-awarded EXIT Festival, the No Sleep Festival will be held at several locations, while the central events with the state-of-the-art production will take place in the Port of Belgrade, on the banks of Danube. Aside from the central parties in the Port of Belgrade, No Sleep Festival will also feature daily parties as well as accompanying programs such as exhibitions, workshops and a music conference. Also confirmed on the festival bill for the next day, on Friday, 16th November are Nina Kraviz, Dax J, I Hate Models, Aleksi Perala and many more soon to be announced.

First release tickets are available online at Nosleepfestival.com and they allow access to all parties and venues across the whole weekend spanning from Thursday night to Sunday afternoon, 15th to 18th November, at multiple locations in Belgrade, from the three main all-night parties at New Hangar in the Port of Belgrade, to the after and daytime parties at Serbian venerated clubs like Drugstore, 20/44 and many other bars, record shops and galleries. The new festival originated from the club culture and the iconic No Sleep stage at EXIT that is known for showcasing clubs like Fabric, Tresor, Concrete, Sub Club, Nitsa, Arma17, The Bunker NY, Goa, Grelle Forelle and many more.

Spotted by locals: Novi Sad, the home of EXIT Festival