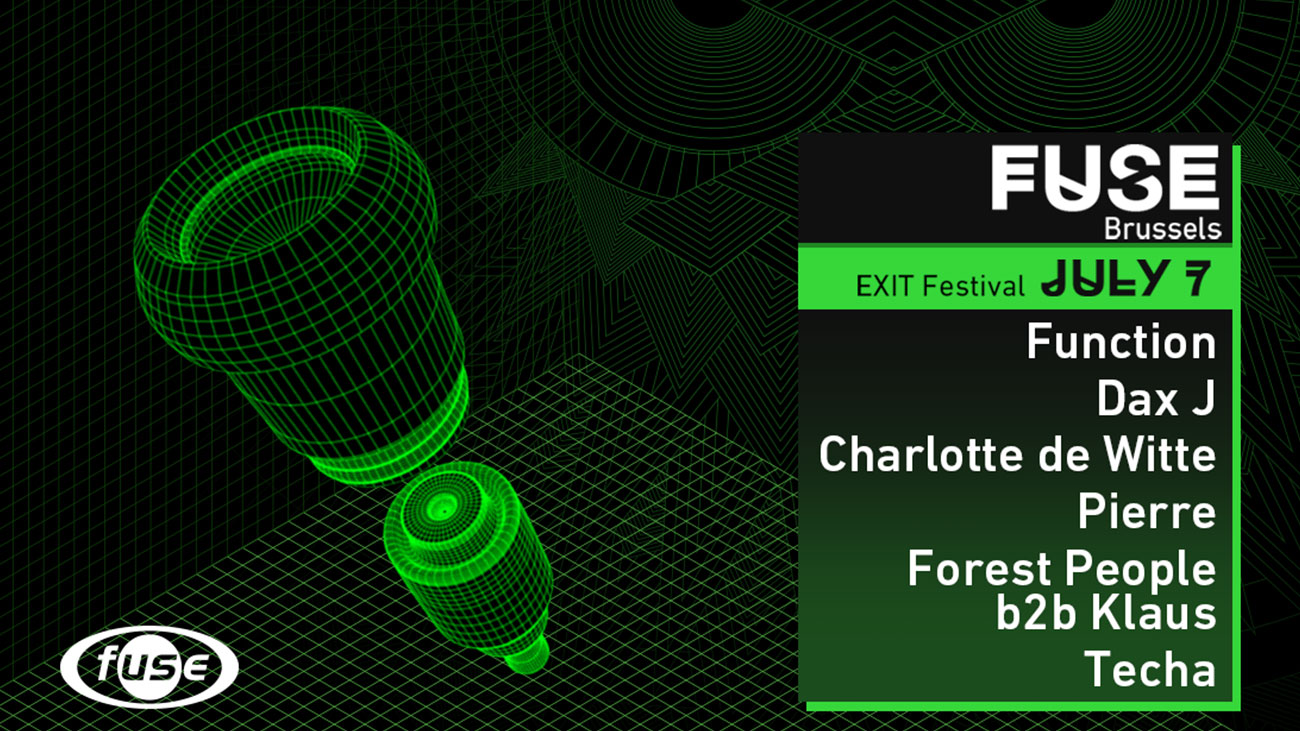 After some of the leading European underground clubs confirmed their presence at EXIT last week, the legendary techno institution Fuse from Brussels is the first to publish their killer lineup for Thursday, July 7! After so much time and numerous requests by true techno sound lovers, the fortress will finally be visited by – Function! New York’s finest techno producer and founder of the highly influential Sandwell District collective said yes to the joint invitation by the iconic Exit Festival’s stage and the famous European club with more than two decades of impeccable history. After social networks caught fire following the unofficial information about his coming, now it’s official! Unstoppable British producer Dax J will definitely perform on the second night of Exit as a part of the Fuse night, with something he definitely excels at – the closing set! Highly responsible task to live up to the impeccable reputation of the Brussels club will be given to two of their most prominent residents, currently the most praised Belgian DJ star Charlotte de Witte and a true European club scene legend Pierre. The regional colors of #NSNS stage will be jointly defended by Forest People, the Bosnian producer with an enviable music career and Klaus, the mainstay of the Exit’s hometown scene.

Two main guests of the Brussels club are Function, the absolute legend and techno scene’s heavy-weight, and Dax J, a British star which in the past couple of years has been fast-marching to the top. As one of the true underground heroes, Function has been present on the international scene for over two decades. Dave Sumner is also a cofounder of extremely influential Sandwell District collective, and also the owner of Infrastructure label. After a series of successful releases, in 2013 he relased a well-received album Incubation for prestigious Ostgut Ton which officially made him a part of the Berghain family, together with the likes of Klock and Dettmann. Even though many people are impatiently waiting for his debut at the fortress, it is interesting to note that Dax J is actually returning to EXIT! After he applied to the traditional Play at EXIT competition in 2009, it was his mix that got chosen among hundreds of others, earning him a performance at myEXIT stage. Almost a decade later, he is considered to be one of the best DJs in the world according to the latest Resident Advisor poll, while also being nominated in Mixmag, Groove Magazine and DJ Mag as Best Breakthrough DJ. Aside from the closing sets in the world’s greatest clubs such as Fuse, Printworks, Grelle Forelle, Bassiani, Spazio 900 and others, he is particularly remembered for his 10-hour marathon in Berghain. Still, his performance which has been shared incessantly for months on social networks is the closing set in this year’s Awakenings series finale at Amsterdam Dance Event, at the Gashouder venue filled to the brim!

At many events, they would deservedly be considered main acts, but when they represent an institution such as Brussels Fuse, residents Charlotte de Witte and Pierre have special responsibility. An extraordinary musical talent of the 24-year-old techno heroine from Brussels is featured on Ben Klock’s Mixmag CD, published by Tiga, and her sets are welcomed by the thousands at festivals such as Awakenings, I Love Techno, Tomorrowland, Dour and others. Today she is a Fuse club resident, hosting KNTXT evenings at which she has already featured names such as Stephan Bodzin, Jonas Kopp, Slam, Paula Tempe and her equally famous compatriot, Amelie Lens. If she reflects the future of the club, he is its heritage and foundation. Pierre is a Fuse resident since day one. His experience includes some of the most unbelievable stories and a music collection which can compete with the most ardent selectors. He comes from an era in which production didn’t matter in comparison with the fundamental skill of mixing music into a unique and unforgettable experience. Today, his parties at Fuse club are named after the Lessizmore label he started 12 years ago with Jessica, and aside from being the club’s main booker, he successfully runs the new Fuse label.

Fuse – non-stop techno for a quarter of a century!

After last year’s Friday when we relived history with Berlin Tresor, this year we will welcome another international techno culture monolith, the club which has been open without interruptions for almost two and a half decades – Fuse from Brussels! During mid-90’s their guests were Carl Cox, Laurent Garnier, Sven Väth and Richie Hawtin, and today they host some new stars such as Psyk, Antigone, Francois X and Bjarki. The famous “I Love Techno” festival originated in the same kitchen, as well as the well known mix CDs with the distinctive Fuse mark, which can still be found on their label’s records.

The famous No Sleep Novi Sad stage at EXIT Festival will again take the audience to another world-known club every night! While in the past #NSNS was visited by such leading clubs as Tresor, Nitsa, Concrete, Grelle Forelle, Drugstore and 20/44, this year, from July 5 to 9, we listed Sub Club from Glasgow, Fuse from Brussels, London club duo Avant Garde and Corsica Studios, while Parisian Concrete is returning to EXIT! The lineups of other clubs will be known soon, and after Belgrade, Barcelona and Vienna, this year we can expect new No Sleep events in leading European clubs, but also the sea edition of No Sleep stage at the Sea Dance Festival!

Fatboy Slim announces an exclusive Warehouse Rave at No Sleep festival in Belgrade!