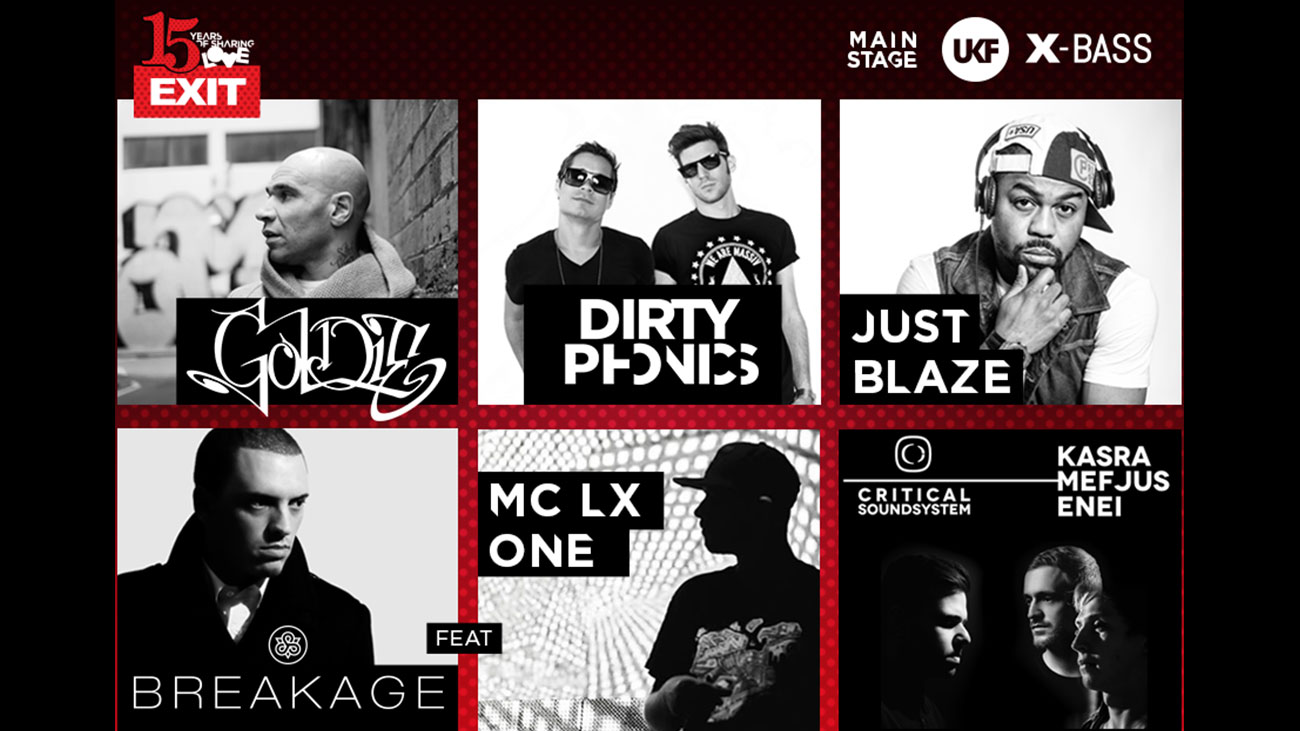 The legendary DJ and producer, actor, and visual artist, Goldie, will perform at Exit’s main stage on 10th July. His performance will be part of the popular X-Bass takeover, which is done in collaboration with the global music platform UKF. The live icon of drum&bass movement and the founder of the pioneering label “Metalheadz” is coming back to Novi Sad for Exit’s 15th birthday bash with 20th anniversary since the most influential drum&bass album came out – Goldie’s “Timeless”! On the same night, the main stage will also host the popular tandem Dirtyphonics from Paris, and 9th July is reserved for the London-born-and-bred DJ and producer Breakage, backed up by MC LX oNe. Hip-hop and hard bass fans should highlight July 11th, as Exit hosts the American beat-maker Just Blaze, who produced major hits for Jay Z, Eminem, Kanye West, Snopp Dogg and Rick Ross! On the closing night, July 12th, X-Bass will bring us DJ trio Critical Soundsystem, comprised of Critical Music label founder Kasra, backed by demanded Russian producer Enei and Austrian rising star Mefjus.
There’s little left for Goldie to do. He’s a graffiti master, the famous “Bad Boy” Lincoln from the movie “Snatch”, the bodyguard Bullion from the Bond movie “The World is not Enough” and more. The TV and acting persona Clifford Joseph Price is better known in the music world as Goldie, a pioneer of drum&bass music and the person who popularised it. One of his early contributions was when he helped create the iconic hit “Ruffige” by the Ajax Project group. His debut single “Terminator” brought with it the first use of the popular “time-stretch” effect used in production. He’ll be celebrating the grand jubilee at Exit this year, thus marking 20 years since the release of the “Timeless” album. Judging by the undivided opinion of fans and critics alike, the album is lauded as one of the most important releases in modern music, with the famous, leading track “Inner City Life”.
The X-Bass will also present the freshest in hip-hop sound, brought by Just Blaze directly from the “Roc-A-Fella” and “Roc Nation” labels.  He’s been producing some of the biggest hits for the last 15 years, helping create iconic albums such are „Recovery“ (Eminem), „The Blueprint“, „The Black Album“ (Jay Z), „The Greatest Story Never Told“ (Saigon) and countless others. Just Blaze’s opus contains tens of hits at the peak of American and British charts, like  „Touch The Sky“ (Kanye West), „Oh Boy“ (Cam’ron), „Live Your Life“ (T.I. ft. Rihanna), „Makes Me Wonder“ (Marron 5), „Show Me What You Got“ (Jay Z), „No Love“ (Eminem ft. Lil Wayne), and still hot single “Higher”, featuring Baauer and Jay Z.
Many compare their energetic acts to the fiercest rock shows. Dirtyphonics are bringing not only the hardest drum&bass sounds, but the freshest trap, drumstep and dubstep hits mashed together in a furious DJ set at Exit’s main stage on July 10th. The popular Parisian tandem collaborated with stars like Marilyn Manson, NERO, and Benny Benassi, while their remix of Skrillex’s hit “Scary Monsters and Nice Sprites” hit over 15 million views on YouTube. Following in the footsteps of their music idols such as Daft Punk, Pendulum as well as Metallica and Korn, they achieved planetary popularity and are one of the most hotly-tipped bass names today.
James Boyle, better known as Breakage, rose to fame with his highly sought out remixes for names like Massive Attack, Florence + The Machine, Plan B, Magnetic Man, Underworld, Claire Maguire and Ellie Goulding. This DJ and producer from London held BBC Radio 1’s first spot for five weeks thanks to the single “Fighting Fire” featuring Jess Mills, which was declared as the best release in the world by famous host Zane Lowe. The talented LX One will give him MC support at Exit on the first X-Bass party night, whose solo album is set for release this spring.
“Kasra is a gatekeeper to what is under the surface in drum & bass. He does what he does with passion and care“, those were the words Goldie used to describe the founder of seminal label Critical. He will be joined in triple b2b set by the most demanded Russian DJ and producer Enei, whose remixes for Chase & Status, Netsky and Royksopp, among other releases, are spun by Goldie, Hype, Andy C and London Electricity. Trio is rounded by Mefjus, winner of Drum&BassArena award for the Best Breakthrough Artist, whose album “Emulation” recently impressed world’s bass scene.
Tickets for Exit Festival are available from 89£ (122€) +b/f, and for Sea Dance Festival at 49£ (59€) +b/f. The unique ticket for 10 days of Exit Adventure, from Serbia to Montenegro, is available for £105 (145€) +b/f at Exitfest.org. Additional packages including travel and accommodation can be found at Exittrip.org.
John Newman and Milky Chance bring the hottest global hits to Exit!

Exit and Sea Dance shortlisted among the best European festivals!