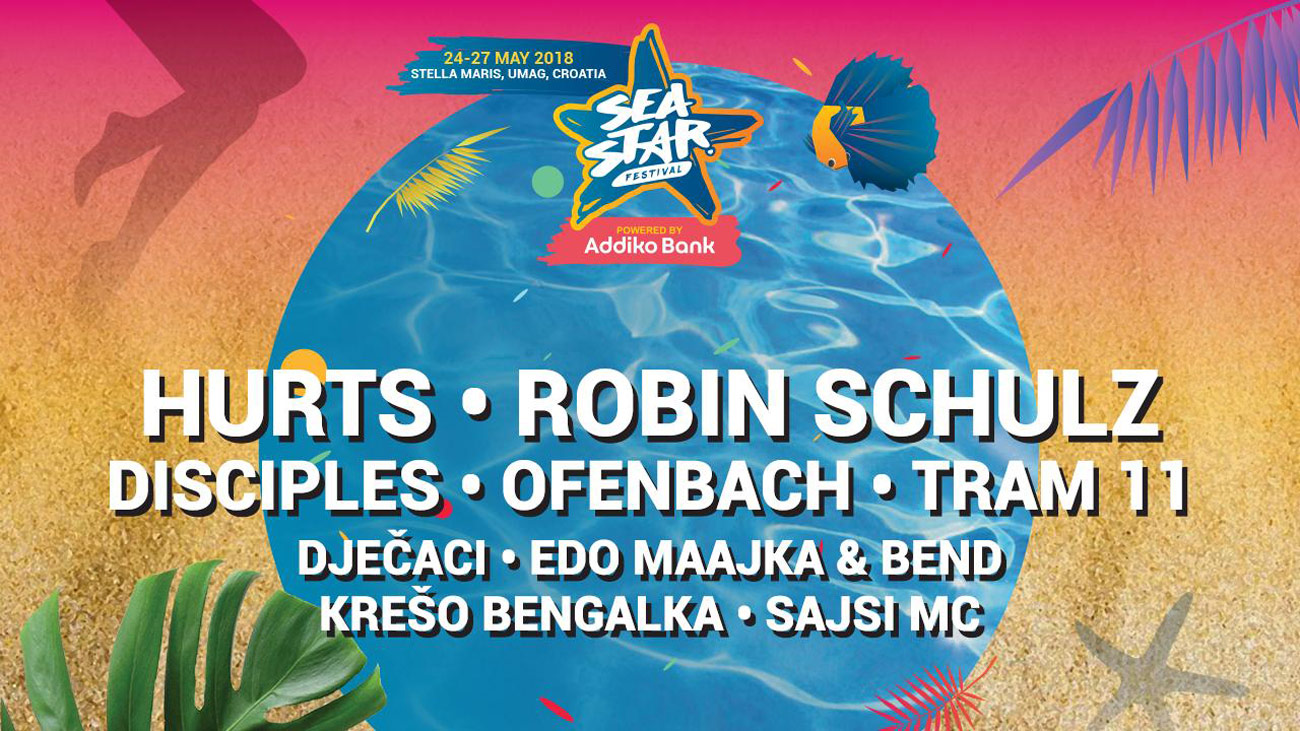 Last year’s premiere edition of the Sea Star Festival, the new Croatian star organized by EXIT Team, managed to surpass all expectations straight from the start, attracting more than 50,000 people to the magical Stella Maris lagoon in Umag. This year’s festival, which will take place from 24th to 27th May at the same location, is bound to be even hotter, at least according to the sales – the first batch of 5,000 early-bird tickets were sold out the very day the festival was announced. The first wave of music sea stars are lead by one of the best concert bands of the day, Hurts, and the killer hitmaker Robin Shulz, shaking the main stages of festivals around Europe! Hits numbering in dozens will be taken care of by the hottest London trio, Disciples, as well as Ofenbach, the hot French duo! In order for the party to be even more intensive, apart from the dance tunes, the hip-hop beats will surely shake the stage, lead by Zagreb heavyweights, Tram 11, godfather of Balkan rap, Edo Maajka, the only true lady of regional hip-hop scene, Sajsi MC, everyone’s favorite Dječaci of Dalmatia, and the absolute street trap warrior, Krešo Bengalka from Split.

British duo Hurts very successfully evoke the romanticism of the 80s in a contemporary format, leaving no one indifferent, including the Glastonbury audience who said they are the best live band! Their Exit performance in 2014 and Sea Dance in 2016 blew the minds of dozens of thousands, singing along their greatest hits, such as “Wonderful Life”, “Miracle”, “Stay”, “Sunday”, “Illuminated”, “Lights”, “Some Kind Of Heaven”, and many other. Theo Hutchcraft and Adam Anderson had the fastest selling British album of 2010 with their debut, “Happiness”, cooperating with Kylie Minogue and Calvin Harris. The follow-up, “Exile”, repeated the success, entering the top 10 albums in Europe, while the third one, “Surrender”, expanded their audiences towards the rest of the world. Their recent album, “Desire”, with the last single “Ready To Go” collecting millions of YouTube views, takes the phenomenon from Manchester to a new world tour arriving to Croatia in May.

Master of today’s dancefloors, German DJ and producer Robin Shulz, is a man with a golden touch. The gifted German is a star of today’s main festival stages, and the list of people he cooperated with includes Moby, David Guetta, James Blunt, Akon and other big names who have nothing but praise for Robin. His last album, “Undercover” (2017), continues to grab top spots with the hit single “OK”, while the new and fresh track “Unforgettable” is quite an introduction for his Sea Star Festival performance. Disciples, the London trio, exploded with their hit track “How Deep is Your Love”, created in cooperation with Calvin Harris. The trio consisting of Duvall, Luke Mac and Gavin Cool get points for being authentic by writing, singing and producing their own music, while their 2017 single “On My Mind” achieved great positions on top lists. What it feels like to hear your song played at every corner is well known to the French duo Ofenbach, whose hit “Be Mine” marked the summer. The idea of mixing rockabilly with house music brought the much-needed freshness into summer months, while their current hit-single, “Katchi” is keeping the winter days quite warm!

After the EXIT Summer of Love gathered the four festivals in a row last summer, EXIT Freedom 2018 will represent not less than five festivals in five countries: EXIT, Festival 84, Sea Star, Revolutioni Sea Dance. Tickets for Sea Star festival are available at THIS LINK. Accommodation and travel arrangements can be found at Exit’s official travel agency, ExitTrip’s OFFICIAL WEBSITE.

EXIT's Festival 84 presents an Olympic line-up of performers for its first edition!

Exit’s 15th birthday celebrated by 190.000 people – the adventure moves on to Sea Dance!