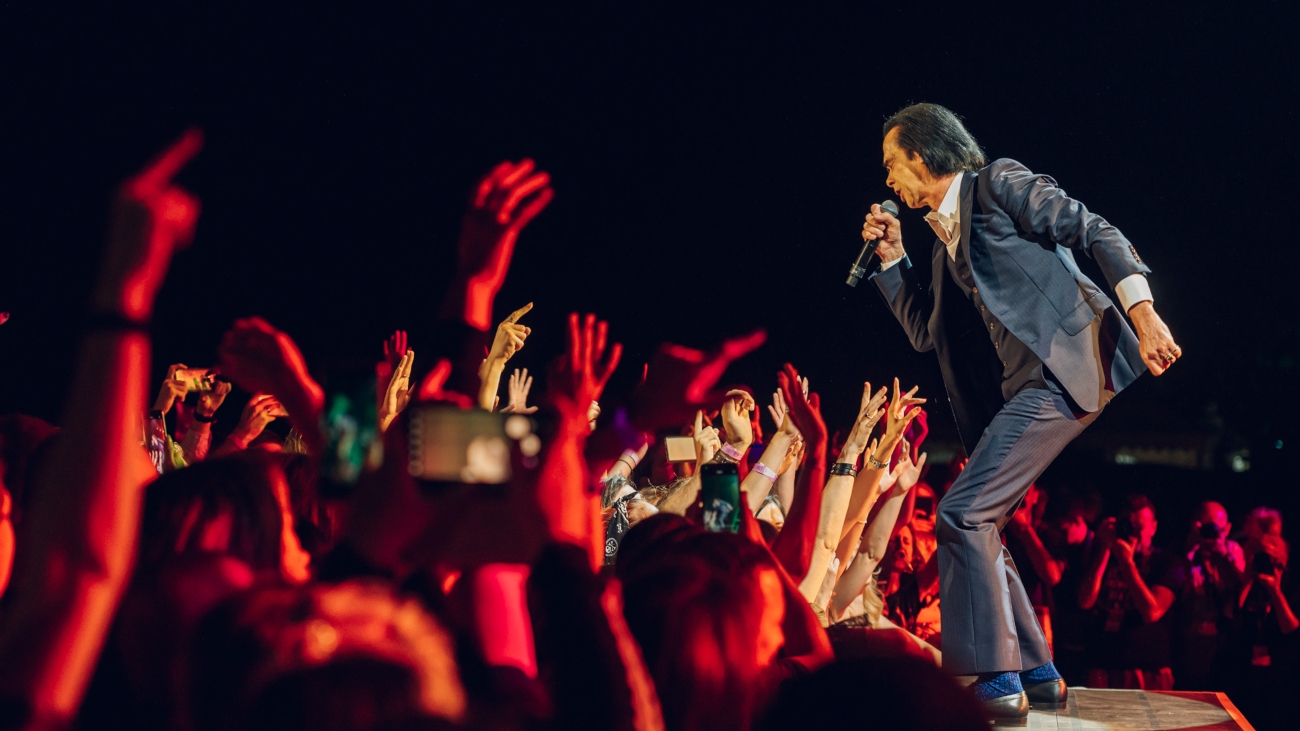 As if being Nick Cave was ever easy? From the catacombs of Melbourne, through the grey sky over Berlin, and the sun over Sao Paulo, to today, Nick has gone through great trials, abysses and hopes. Still, always, even when quarrelling with God and Lucifer, he found time to give people a chance to awaken the “better angels” within themselves, as he likes to say. It seemed as if he found his “better angels” in 2018 because that year’s concert ended with a crowd of young people on the Main Stage, who (for many die-hard Cave fans) sang unusually peaceful and harmonious songs in some kind of collective liturgy around which both believers and atheists gathered, with Cave as their local preacher, a priest of a new religion. And we quietly went into the night with peace in our hearts and “Push the Sky Away.”

Nothing was the same four years later in the same place. After the death of another son, nothing was left of the 2018 Nick except for the hairstyle and the suit. From the forgotten depths of Nick’s soul emerged the rebellious and furious Cave from 1987. It was clear from the beginning, after the intense opening songs “Ready for Love” and “There She Goes My Beautiful World,” that Cave would not yield to the forces of darkness haunting his past, despite all the pain he is dealing with. The opening songs showed that he would still fight for the love he believes in, no longer serenely and harmoniously but rebelliously. The three gospel singers instantly brought us back to “The Good Sone” phase and his “rebirth” after the struggle with drugs, when around 1990, he became interested in gospel music, as well as the album “Abattoir Blues/The Lyre of Orpheus” from 2004. Also, to the audience’s surprise, the iconic “Jubilee Street” became increasingly fast in the finishing stages. Nick repeatedly interjected with the words “Boom Boom Boom” and “Cry Cry Cry” in every other song — a clear sign that he was full of pain and tears that he would not let go and so full of rage that he would be willing to empty the clip at fate.

Timeless classics such as “Tupelo,” a debate with God about Good and Evil, followed, along with “The Mercy Seat” and “Red Right Hand,” made famous by the series “Peaky Blinders” (the flag of Northern Ireland depicts a red right hand). The fast and furious “City of Refuge” was also resurrected, perfectly fitting the anger and pain that Nick exuded, all the while preaching that he believed in love. Half of the audience burst into tears when, without any verbal interpolations from Cave, it became clear to everyone how the old Australian carried the burden of loss with dignity at all times and how he “worked through” it all as an artist on stage.

This time, Nick Cave didn’t bring a bunch of young people on stage to sing together in “religious ecstasy” — he no longer has the strength for that or even for their love. He brought out one hyper-talented young man for whom singing a duet with Cave will be a life-long memory. Many hands touched Cave’s arms (and legs), and again, for the umpteenth time, Nick became a saint in an arena, which began to look like a church in its own right. In this church, he preached about anger, sadness, and most of all, love, as an apostle of the “new faith,” although he is a proponent of the old one himself.

Monumental and poignant. And at the end, when he announced that this would be one of his last concerts “for a long time” (perhaps even in his career, although we hope not!), and when he addressed his band with “The Bad Seeds, see you around!” – you could hear hearts breaking as the eyes of the audience filled with tears. And indeed, if you look at the tour dates, you will see that only 18 more concerts are scheduled until the end. Nick is moving to Australia and will play with Warren a bit more quietly for a while longer before closing up shop. Whether he will ever come out with new art sparked by new feelings or pain will finally close his poetic mouth and take away his “Orpheus’ lyre,” we will see. See you around, Nick! And we hope this is not goodbye.