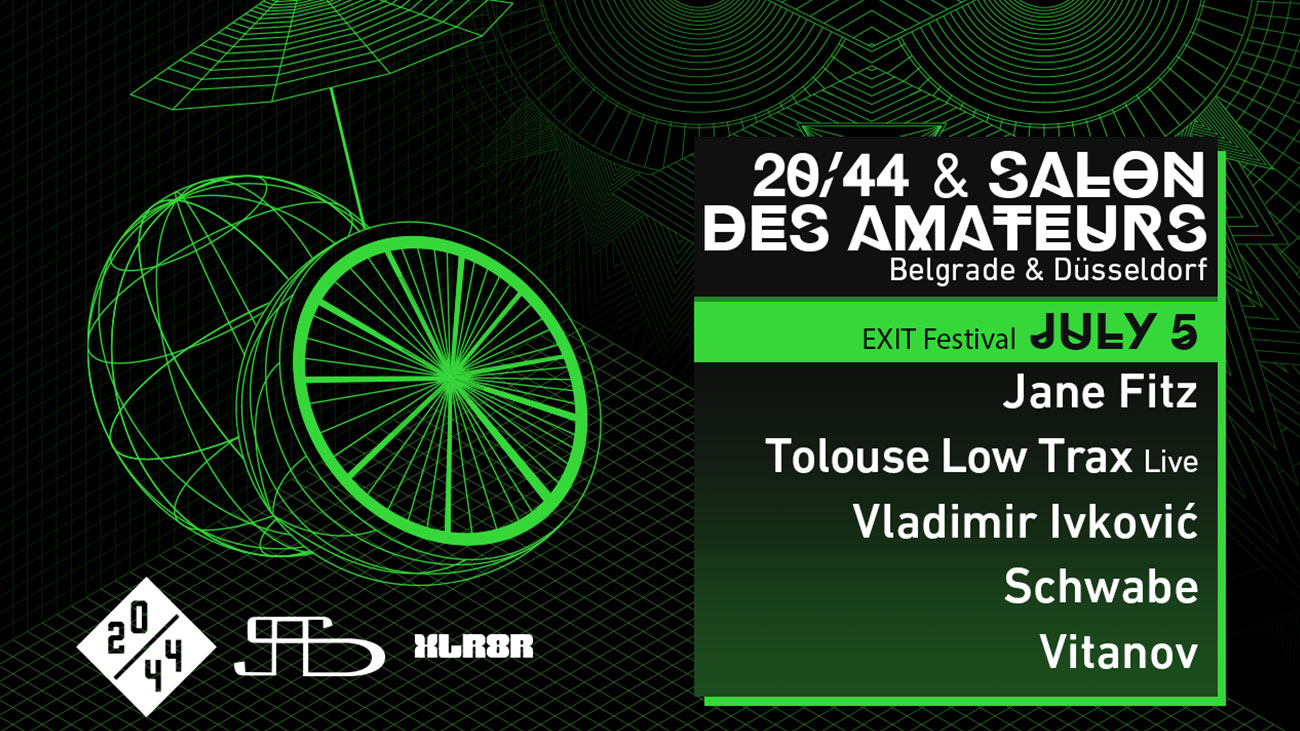 EXIT Festival will last five days this year, and just like the Main Stage and mts Dance Arena, the No Sleep Novi Sad stage will also start its engines on Wednesday, July 5! On the same night, after bringing world famous clubs to the Petrovaradin Fortress and throwing parties in London, Barcelona, Brussels and world destinations, the revered #NSNS stage will also take over the colossal mts Dance Arena for what is dubbed the Guarana No Sleep Festival at EXIT! This festival within EXIT will have Jeff Mills, Ellen Allien, Paula Temple & Rebekah, Lag b2b UVB, and many more. At the same time, in the large fortress trench, separated from the Arena by an old tunnel, No Sleep Novi Sad stage will continue its club-showcase concept and the already confirmed Sub Club, Fuse, Avant Garde and Concrete are now joined by Dusseldorf’s Salon Des Amateurs and Belgrade’s party boat 20/44!

The joint decks of the Salon and Boat will be headlined by Jane Fitz, the acclaimed London selector know for impecable sets at world clubs, such as Concrete or Panorama Bar, while being also regular at Pickle Factory, Salon des Amteurs and 20/44. Detlef Weinrich, better known as Tolouse Low Trax, one of the founders of Salon Des Amateurs and the cult band Kreidler is also coming to EXIT. Düsseldorf’s kraut-rocker, post-punker and romantic will perform live. Synergy of these two very close clubs is once more linked by the Salon resident Vladimir Ivkovic, born in Belgrade and living in Düsseldorf for decades, where he heads the Loco Dice’s Desolat label, as well as his own Offen Music, whose first edition was the unpublished works of the genius from Novi Sad, Mitar Subotić Suba, signed as Rex Ilusivii. The slowburning intro belongs to 20/44 resident Schwabe, while their another regular Vitanov will take on the closing set.

No Sleep goes further than ever this year!

No Sleep events have been held this year in London (Avant Garde at Corsica Studios), Brussels (Fuse) and Glasgow (Sub Club), and performers at No Sleep parties all over the world included Rebekah, Honey Dijon, Fort Romeau, Jennifer Cardini, Man Power and others. This year we will see the first seaside edition of the No Sleep stage, at the Sea Dance Festival. Among others, performers will include Amelie Lens and Berghain residents, Etapp Kyle i Kobosil, as well as Space Dimensions Controller, South London Ordnance, Filip Xavi, Insolate, TKNO and others!

Entertainment in the old times: Take a Break - Feel the Art

Manu Chao la Ventura to pump up one of the greatest editions of Exit festival!