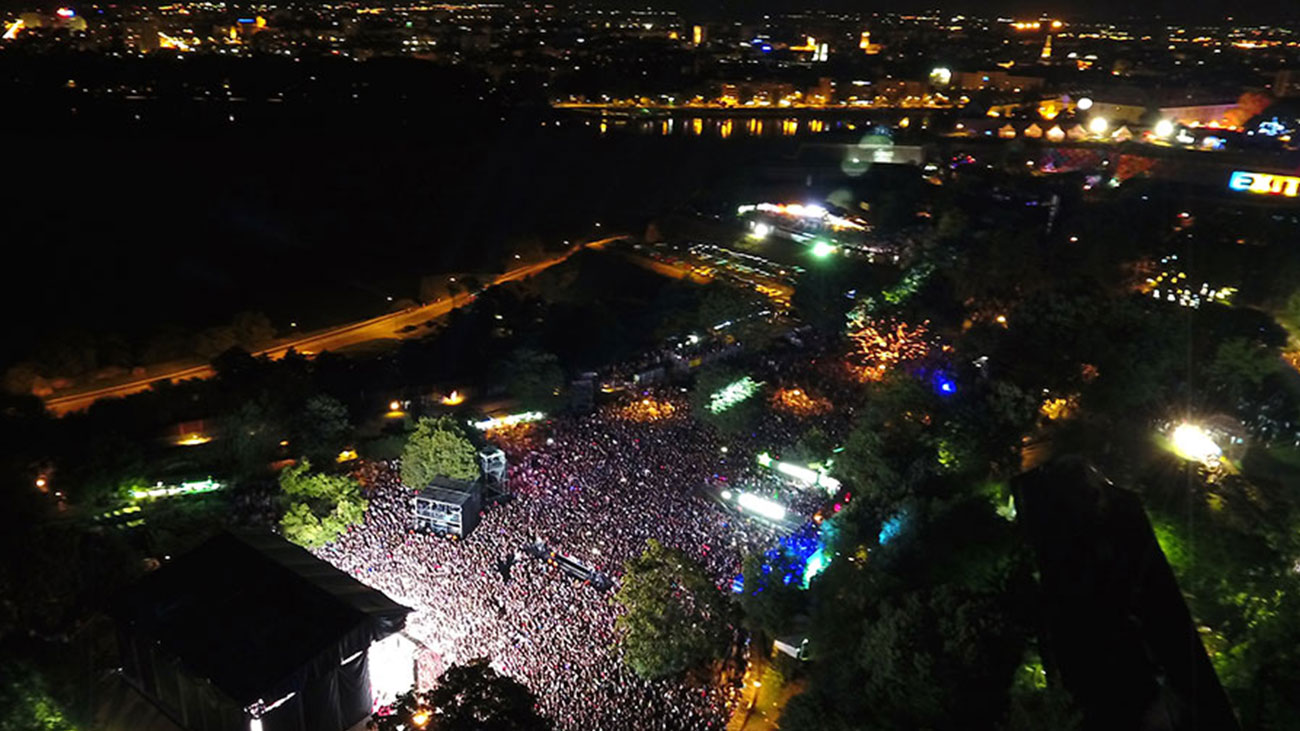 This year’s magical EXIT Adventure took off with the people from all corners of the globe – from the farthest corners of the world, to the even more numerous local fans, as well as fans from the entire region! During the first night of Exit Festival, 44,000 visitors passed through the festival doors, getting the Exit Magic started in front of the traditional Main Stage fireworks display. And then ensued a musical sensation in the form of the ultimate pop princess Ellie Goulding, whose name echoed across Main Stage, and at some moments overpowered the deafening spectacle overhead! The intro caused a real delirium with just a part of the namesake hit. The show continued with  “Aftertaste”, which was followed one after another by worldwide hits “Lights”, “Burn”, “On My Mind”, “I Need Your Love” and others, while the very end was reserved for the absolute megahit ballad “Love Me Like You Do” with a unanimous verdict from the crowd – “WE DO”! Before Ellie, the Main Stage was blown away by the British indie rockers Bastille who played hit after hit like Things Lost In Fire”, “Bad Blood” and the absolute anthem for this year’s EXIT Adventure, “Pompeii”! The excitement at Main stage continued with performances by the British hit making duo Sigma, after which the London collective “Playaz” celebrated 20 years together with their drumandbass champion DJ Hype, hip-hop dive MS Dynamite and the talented Sub Zero! Especially loud and impeccable was the star of this year’s main stage “Anya”, the new revolutionary sound system by US company EAW, which recently arrived from USA and is the first of its kind in Europe!

Fusion Stage welcomed great performances by Nova Heart, Gooral, Urban & 4, ZAA, while the honor of closing the stage was given to the legendary local group from Novi Sad, Obojeni program.           Fans of furious gigs sand loud and louder at Explosive Stage with Anti-Flag, The Rumjacks, and many others.

mts Dance Arena the first night was marked by truly audio-video marvel and officially the best DJ duo Dimitri Vegas & Like Mike, whose production made sure this is going to be a night to be remembered at the jam-packed, Exit’s world famous stage. The absolute triumph was reserved for Solomun and the most popular regional DJ trio TTP – Teenage Techno Punks, who made a special reunion just for EXIT with Marko Nastić, Dejan Milićević and Miloš Pavlović! Nearby No Sleep Novi Sad Stage announced its step into the future with the lineup of resident DJs by tonight’s host, Nitsa club led by The Hacker, Rebolledo and Tijana T.

The Festival was symbolically opened by at the “Magical dialogue” zone, realized with the help of “Danas” and SKCNS “Fabrika”. From 19h the first among many panel discussions to be held titled “Silent Balkan Majority”, about the position of the identified majority for a stronger international cooperation in the region. The speakers were director and musician Damir Urban, actor Emir Hadžihafisbegović, director Kokan Mladenović, CEO and founder of Exit, Dušan Kovačević, while the honor of moderating this exciting event was given to the journalist from “Danas” Gordana Nonin.

One day tickets for EXIT are still abialable at the main festival point of Sale at Petrovaradin Fortress.

EXIT magic card by OTP Bank is the official means of payment at EXIT Festival and only with it you can pay for drinks, food and souvenirs. All who register their card at OTP Banks automatically achieve up to 15% discounts on all drinks at all EXIT bars and at EXIT Camp. Cards are available at all OTP Banks where they can be registered right there and then.