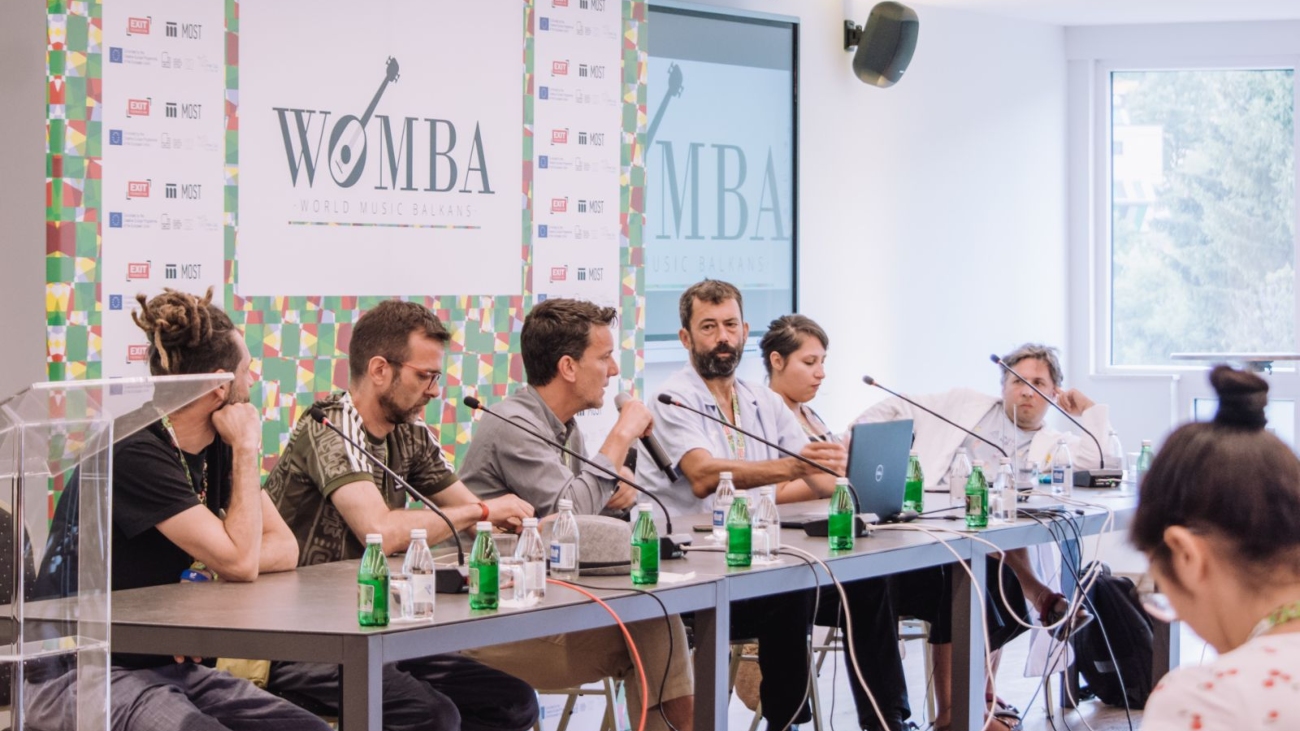 The conference was held from 8 to 10 July in the Wellness & SPA resort “Fruške terme”, with the presence of more than 100 delegates consisting  of music industry professionals from Europe and the world, while a special showcase was presented at the Festival itself from 7 to 10 July, at the new location on the significantly improved EXIT’s Pachamama Stage.

The WOMBA platform was created as part of a European project MOST – The Bridge for Balkan Music, supported by the Creative Europe Programme. EXIT Foundation is, along with Hangvető, Piranha Arts (the official organiser of WOMEX – World Music EXPO), Songlines (the world’s leading World Music media) and six other partners from Europe, an important partner of the MOST music project, with the common goal of connecting artists, promoters, events, publishing houses and organisations from the region focused on the traditional music of the Balkans, popularising the World Music genre in these areas and exporting Serbian and Balkan music to the world.

On 8 July, the President of the Board of Directors of EXIT Foundation Ivan Petrović opened the World Music Balkans Conference, with the words of welcome.

“The Balkans is abundant with numerous musical talents, but the accompanying logistics of that value chain of the music industry are lacking – from management, publishing houses, representation, internationalisation. We are trying to connect the whole region and present ourselves as one scene, to brand the Balkan sound, because it really has a lot to offer. Even without an organised effort, there are already many of our performers who managed to present themselves to the world on their own, and if we join together, that will be on a much higher level,” said Petrović.

Ben Mandelson, the founder of the world’s largest World Music conference WOMEX, gave an opening speech, in which he shared his long-term experiences and explained that this music genre arose from the need to connect and present the traditional musical and cultural heritage of the entire humankind, open a space for multicultural communication and support independent and underrepresented performers and artists around the world. The participants of the first edition of WOMBA had the rare privilege of personally meeting Ben Mendelson, the founder of the “World music” genre, which he presented as a cultural-marketing concept with a group of collaborators back in 1987.

“Hidden and authentic Balkans” was the first panel within the WOMBA Conference, and the panelists Kim Burton, Dragi Šestić and Bojan Đorđević talked about the traditional music of the Balkans which is still insufficiently explored, as well as the music in rural areas and suburbs which is not visible. 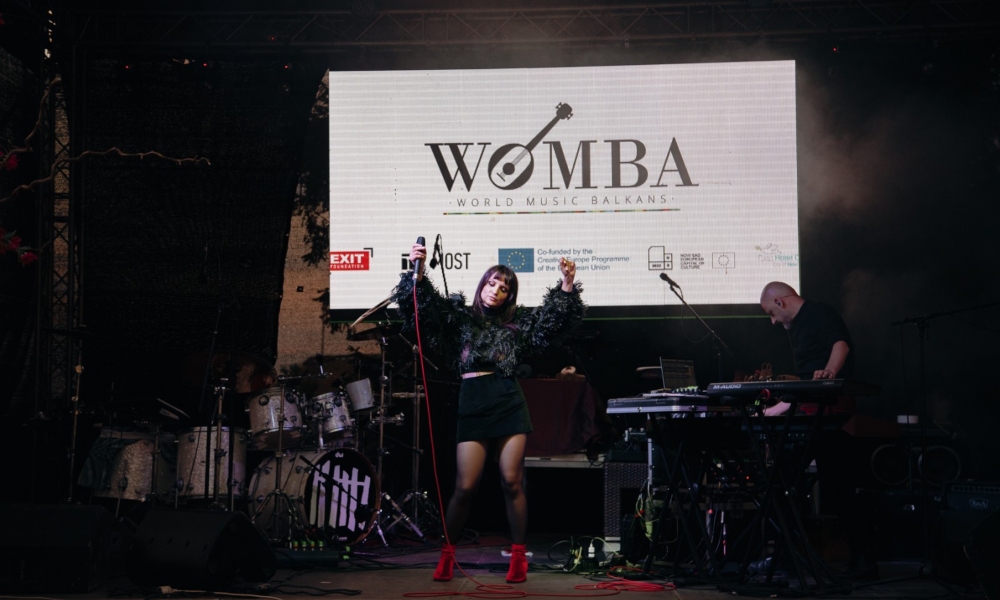 “Listening to the songs, I may not have always understood the words, but I understood the sound.” That is the most important thing, especially for World Music – not everyone will understand what we sing about, but it is important that they feel the emotions in our music,” said musician Dragi Šestić.

The speakers concluded that there is a vocal and instrumental heritage in the Balkans that needs to be given more attention and made more visible, which is taking place through the MOST project – The Bridge for Balkan Music and the newly founded World Music Balkans music platform.

The second day of the Conference was opened by the panel “Regional development and promotion of creative industries”, where cultural industries adviser Petar Kovačević, Tanja Miščević and Evisi Kopliku spoke on behalf of the Regional Cooperation Council (RCC), as well as the relevant representatives of countries from the region – a specialist for creative industries Martin Cuff, Executive Director of the Council of Foreign Investors of Bosnia and Herzegovina Sanja Miovčić, Director and founder of the Click Fashion Studio Nenad Radujević, co-founder of the Women’s Chamber of Commerce of Albania Klodiana Ajazi and Secretary of the Creative Industry Association of the Chamber of Commerce of Serbia Vida Samardžić. The panellists talked about creative industries as key drivers of economic growth and competitiveness, as well as cultural and touristic development of the Western Balkans and gave recommendations on how to encourage regional harmonisation and achieve economic and social benefits.

The panel “Music  & World Music Export Office”, moderated by ethnomusicologist Balasz Weyer, started a discussion on potential ways to systematically support the “export” of the Balkans music to the world.

“Like most music lovers and most music producers, I have always had the feeling that the music of the Balkans is underrated, because it has a large number of very good musicians, a lot of potential, but a lack of infrastructure and real support. That’s why only a few of them can make it to international stages. Even those who succeed in this, succeed thanks to Western agencies, publishing houses, so their experience and income do not return to the region and the regional scene is not being built,” Balasz believes.

Representatives of the Music export offices of France and Estonia shared their experiences and achievements in marketing domestic musical talents to the world, which in the case of these two countries have numerous systemic incentives, starting from support in production, mentoring and promotion, to subsidising the costs of performing at showcase festivals, as well as other events abroad.

The final day of the WOMBA Conference opened with the “Building Bridges” panel, moderated by the owner and founder of MESO Music Events Georges Perot, and the speakers were Login Kočinski, Jake Beaumont – Nesbitt, Leila Chaibeddra and Goran Milošević & Branislav Radojković from the band Naked, which is one of the winners of the MOST competition for the Balkan Music Export. The panellists shared their experiences in making business connections and friendships, emphasised the importance and usefulness of networking, maintaining contacts and working on projects involving multiple partners, and then the participants had the opportunity to get to know each other better within the “Speedmeeting MOST” part of the Conference.

The WOMBA Conference closed with the panel “The Conscious Music is Coming!”, which was held on the Pachamama Stage in a sunset ambience, relaxing atmosphere and beautiful surroundings. The main questions of this panel were where the music of the new consciousness comes from, who creates it and how do we listen to it, and these key points were discussed by artists and musicians Mose, Satori and Laor, Founder of the EXIT Festival Dušan Kovačević, the President of the Board of Directors of EXIT Foundation Ivan Petrović and Micky Karlholm.

The special, premiere edition of the WOMBA Showcase on EXIT’s Pachamama Stage from 7 to 10 July gave the audience the opportunity to hear the winners of the MOST Balkan Music Export competition, who exceeded all expectations with their incredible performances and authentic sound. The stars on this stage were Serbian band Naked, duo Daniel Lazar & Almir Mešković, Macedonian band Perija, Albanian duo Shkodra Elektronike, Bulgarian Oratnitza, Flying Nomads and E.U.E.R.P.I. from the same country, Bosnian-Herzegovinian Divanhana, Croatian duo Dina e Mel and Serbian artist Lenhart Tapes, joined by the vocalist and violinist Tijana Stanković.

Thanks to the MOST project and the WOMBA platform, these rising stars got the opportunity to show their extraordinary talent and present their artistic vision of the traditional Balkans music in fusion with contemporary music genres at a big festival like EXIT, as well as to connect with influential people from this sphere of the music industry at the WOMBA Conference itself. Their creativity is important to support and make even more visible, because it is authentic, traditional, and at the same time modern, and as such can present the musical beauty and culture of the Balkans on the world market in the best light, and it was the WOMBA Conference and Showcase that made a significant first step towards the export of the Balkans music to the world.

In addition to them, the programme on the Pachamama Stage was coloured by meditative and spiritual melodies brought by the leading names of music of the new consciousness, the rising World Music subgenre – DJ Mose and Sam Garrett, Laor, Maya Kamaty and Praful.

EXIT and the MOST Teams would like to thank all participants of the WOMBA Conference and Showcase for their trust and personal contribution. In its premier edition, WOMBA brought together about 20 countries, not only from the Balkans, but also from other parts of Europe and the world.