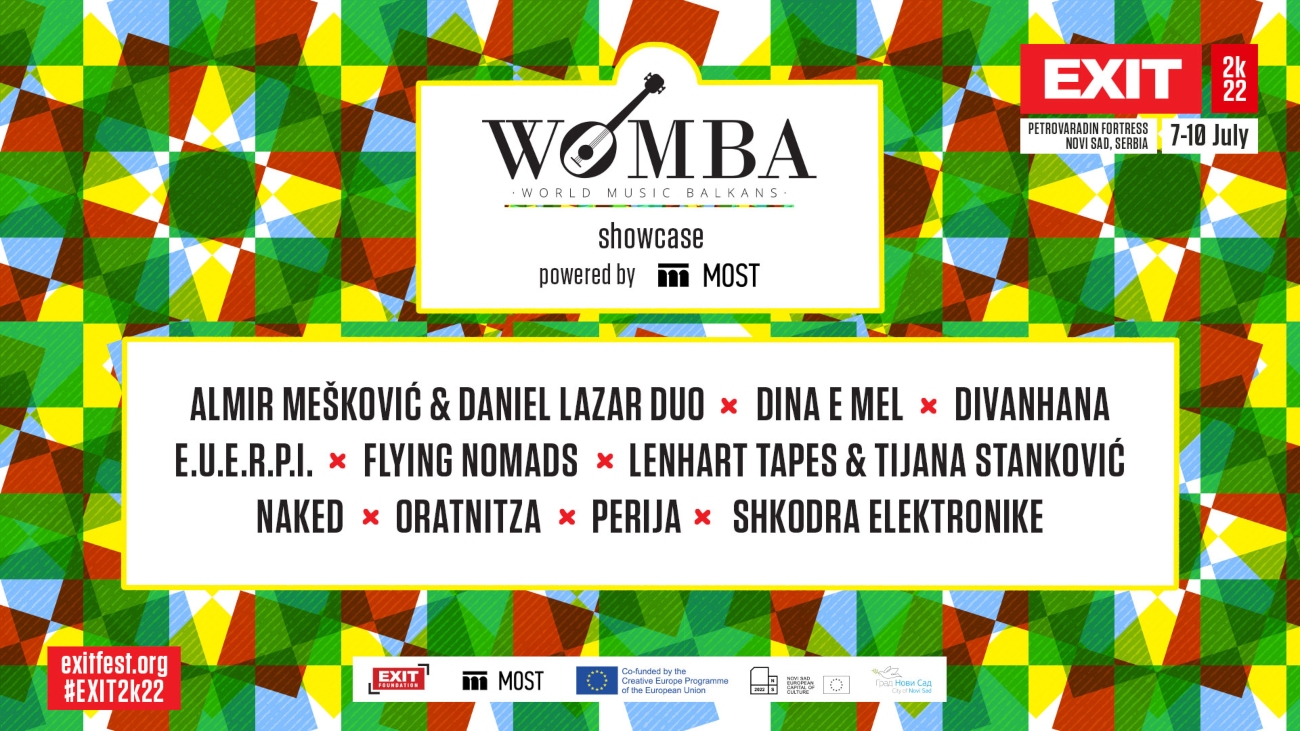 Eclectic sounds of Balkan music at this year’s EXIT Festival, from 7th to 10th July, will echo from the new, larger location of the magical Pachamama Stage as part of the unique World Music Balkans (WOMBA) showcase. They are brought by rising stars from the Region, including Divanhana, Naked, Perija, Lenhart Tapes, Shkodra Elektronike, Oratnitza, E.U.E.R.P.I., The Flying Nomads, Dina e Mel and Almir Mešković & Daniel Lazar Duo.

This year EXIT is introducing a new platform, World Music Balkans (WOMBA) under the European project “MOST – The Bridge for Balkan Music”, supported by Creative Europe programme. EXIT Foundation is, together with Hangvető, Piranha Arts (official origanisation of WOMEX Music EXPO), Songlines (leading World Music media), and 6 other partners from Europe, the key partner in the project MOST Music. The MOST network’s mission is to boost the music market of the Balkans, by connecting and supporting actors of the World Music scene, artists, managers, festivals, and institutions. MOST builds a bridge connecting the Balkans and the global music market, a bridge made up of personal connections, experience and exchange (www.mostmusic.eu)

The performers and participants in the first ever WOMBA Showcase, who will present themselves at the EXIT Festival this year, are emerging talents selected by the jury of the MOST Music project. The WOMBA showcase has been also supported by Foundation “Novi Sad – European Capital of Culture” within the Fortress of Peace arch, and City of Novi Sad- Council in charge for Culture.

The Balkan Peninsula, as the cradle of civilisation, has formed an authentic Balkan sound through a multicultural fusion of many spheres of influence through time, including numerous prehistoric cultures on the ancient Danube riverbanks, such as the fascinating Vinca culture, the cultures of ancient Greece, Byzantium, medieval cultures of Slavic and other Balkan people, as well as the cultures of many foreign invaders through the centuries. Fans of the “world music” genre throughout Europe and the world are increasingly recognising the richness, diversity, and authenticity in traditional Balkan music, which, combined with other musical genres and modern production, brings a new quality to the global music scene.

The EXIT Foundation, which, among other things, has been promoting Serbian and Balkan creativity and connecting the Balkan people for years, believes that this is the beginning of the true breakthrough of Balkan music onto the global music scene. With the help of the MOST project, the EXIT Foundation also brings dozens of music professionals, media personnel, and event organisers from Europe and the World to the WOMBA showcase so that they can immediately and directly arrange performances for Balkan musicians all over Europe.

The Sarajevo sevdah band Divanhana creates urban traditional music. They have four studio albums and one live album under their belts, with over 300 concerts, countless workshops for young musicians held worldwide, and a documentary about their 2018 “Zukva“ tour.

The foundation of the Serbian band Naked, was built on the complicated history of the former Yugoslavia, and today the band creates and plays “cheerful music about sadness” with a bear heart and soul and unwavering sincerity and optimism, sends messages of freedom, hope, and love. Supported by the MOST project, Naked performed at WOMEX 2021, biggest World Music showcase globally.

The Macedonian Perija brings a fusion of languages, dialects, and musical influences, with modern and historical themes and aims to share the idea of equality between different nationalities and ethnic groups in the region. In their music, they combine traditional melodies of the area in which they live, Middle Eastern Maqam and North African styles, but also blues, post-punk, and jazz.

Lenhart Tapes, an artist from Serbia, bases his music on manipulated samples of “field” recordings, harmonised with ethno music, with masterful folk vocals from the likes of Svetlana Spajić, Tijana Stanković, and Mirjana Raić.

The Albanian duo Shkodra Elektronike brings an eclectic electronic reinterpretation of the traditional music of their hometown – Shkodër. The six-member band Oratnitza comes from Bulgaria, representing a characteristic “ethnobass” sound; Mirian Kolev brings an ambient guitar drone project E.U.E.R.P.I., while the duo The Flying Nomads will put into practice their belief that music can touch the listener’s soul.

The Croatian duo Dina e Mel explores and performs the melodies of minorities, erases geographical borders and unites musical elements in unexpected ways. Another duo, consisting of Almir Mešković from Bosnia and Herzegovina and Daniel Lazar from Serbia, combines Scandinavian folk with Balkan klezmer in a unique duet of violin and accordion.

Aside from the WOMBA Showcase, the Pachamama stage programme will be coloured by meditative and spiritual melodies brought by the World’s leading names in Conscious Music, the new rising subgenre of the World Music – Mose, Fia, LAOR, Maya Kamaty and Praful.