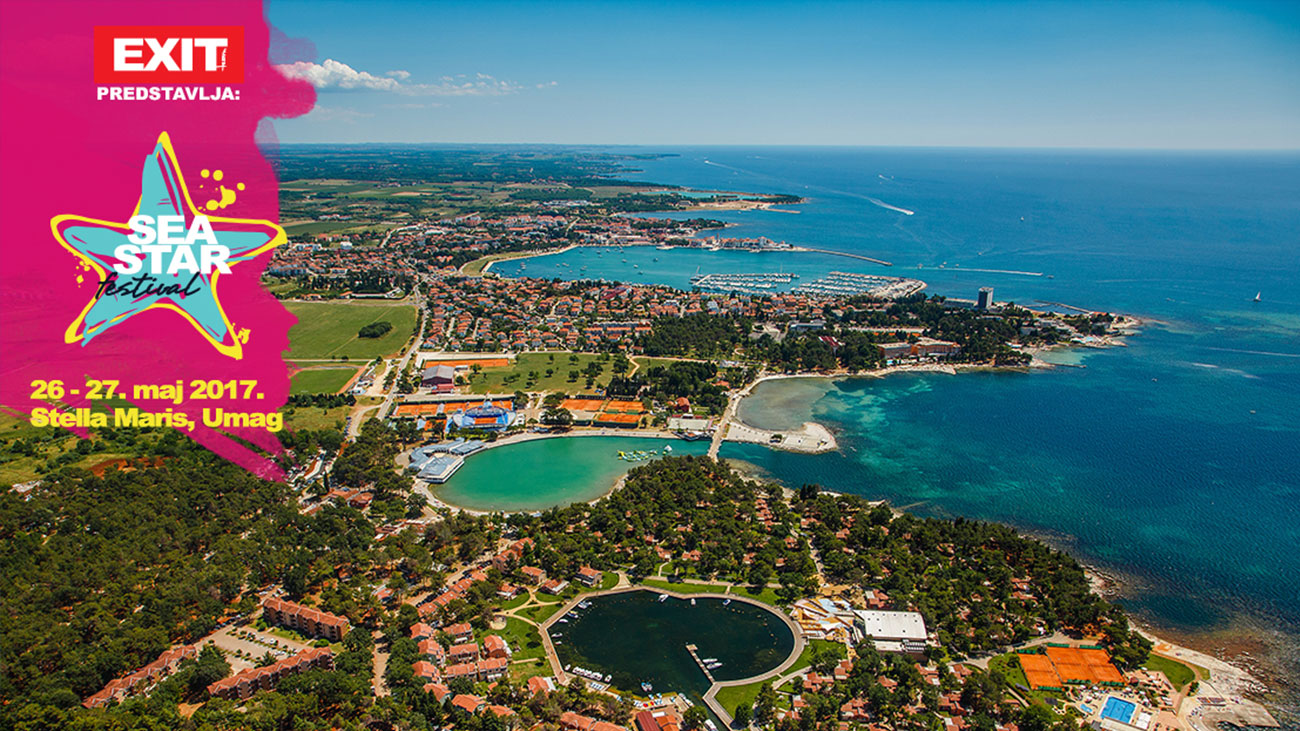 After nearly two decades of running the most succesful festival in Southeast Europe, EXIT in Serbia, with sister events in Montenegro and Romania, the EXIT team is coming to Croatian seaside! The team that holds four awards for best European festivals will now connect all four of these festivals under the same umbrella: the EXIT Summer of Love 2017. New holiday spirited offer is now available under the tagline “1 ticket = 4 festivals”, where each bought ticket for EXIT Festival in Serbia gets you complimentary tickets to the other 3 EXIT-run festivals in Croatia, Montenegro and Romania, will be available only until 30 January.

Starting things off for the EXIT Summer of Love 2017 is Sea Star, a new festival in Umag held from 26-27 May at the Stella Maris resort! First announced acts include of the most popular global bands – The Prodigy, with the local favourites Dubioza kolektiv and Croatian hosts Urban&4. The new shining festival of the Adriatic Sea will present a several dozen of the most important artists in the global and regional music scene at six different stages. Along with the official two festival days, festival-goers can also expect a huge warmup party on Thursday, 25 May, as well as the party for the fittest on Sunday, 27 May! The next chapter in the EXIT’s Summer of Love 2017 is the Revolution Festival that takes place from 1-3 June in the charming Romanian town of Timisoara.  This, also EXIT-run event has been nominated in two categories at the European Festival Awards, for Best New and Best Small Size Festival in 2016.

Right after the globally acclaimed EXIT Festival that’s being held 5-9 July at the colossal Petrovaradin fortress, adventure heads south to the fourth edition of Sea Dance festival 13-15 July! This year was once again a great success for both EXIT and Sea Dance festivals, which combined make the EXIT Adventure, a unique holiday package that took nearly 300.000 fans on a life-changing journey through the Balkans. This massive party starts each year in the second weekend of July at the globally acclaimed EXIT Festival in Serbia, and then travels to its sister Sea Dance Festival in the neighbouring Montenegro. More than 1000 international and local artists performed at 30+ very genre-diverse stages, spanning from the colossal Petrovaradin Fortress in Serbia (EXIT) to the historic town Budva in Montenego (Sea Dance)! EXIT had 4 official days and nights, with Sea Dance adding its 3, but for many the whole festival holiday lasted more than 10 days with camping next to the sandy beaches that both festivals have nearby.

To get connect it all even further, EXIT has started the biggest holiday offer in its history! Available only during the holiday season, the simply dubbed “1 ticket = 4 festivals” offer lets all current ticket holders and future ticket buyers for EXIT festival (priced at 99 EUR+b/f / £89+b/f), get free tickets to the remaining three festivals of the EXIT Summer of Love 2017 as a gift: Sea Star festival in Croatia (26-27 May), Revolution festival in Romania (1-3 June), and Sea Dance festival in Montenegro (13-15 July). The number of these tickets is extremely limited, and all buyers, current or future ones, will need to quickly register their EXIT tickets in oderd to recieve e-tickets for the other festivals. Registration will start from 1-28 February at www.exitfest.org.

Travel packages for EXIT and Sea Star Festivals at the special prices with tickets, accommodation and airport transfers will be available starting 20th December at Exittrip.org.

EXIT will celebrate 50 years since the Summer of Love 1967!

All four festivals by the EXIT team will also celebrate 50 years since the famous “Summer of Love 1967” next year, when the revolutionary hippie movement began and change the world forever by fighting for peace, freedom of speech, human rights, social, racial, and gender equalities. As the only contemporary music festival that grew from a struggle for social change and whose mission is to connect and foster growth in the region, EXIT would like to use this opportunity to protect the basic ideas from which the first music festivals came from during the end of 60s, such as Woodstock, Monterey and others, as well as to convey the messages of those movements which in today’s world are needed now more than ever.