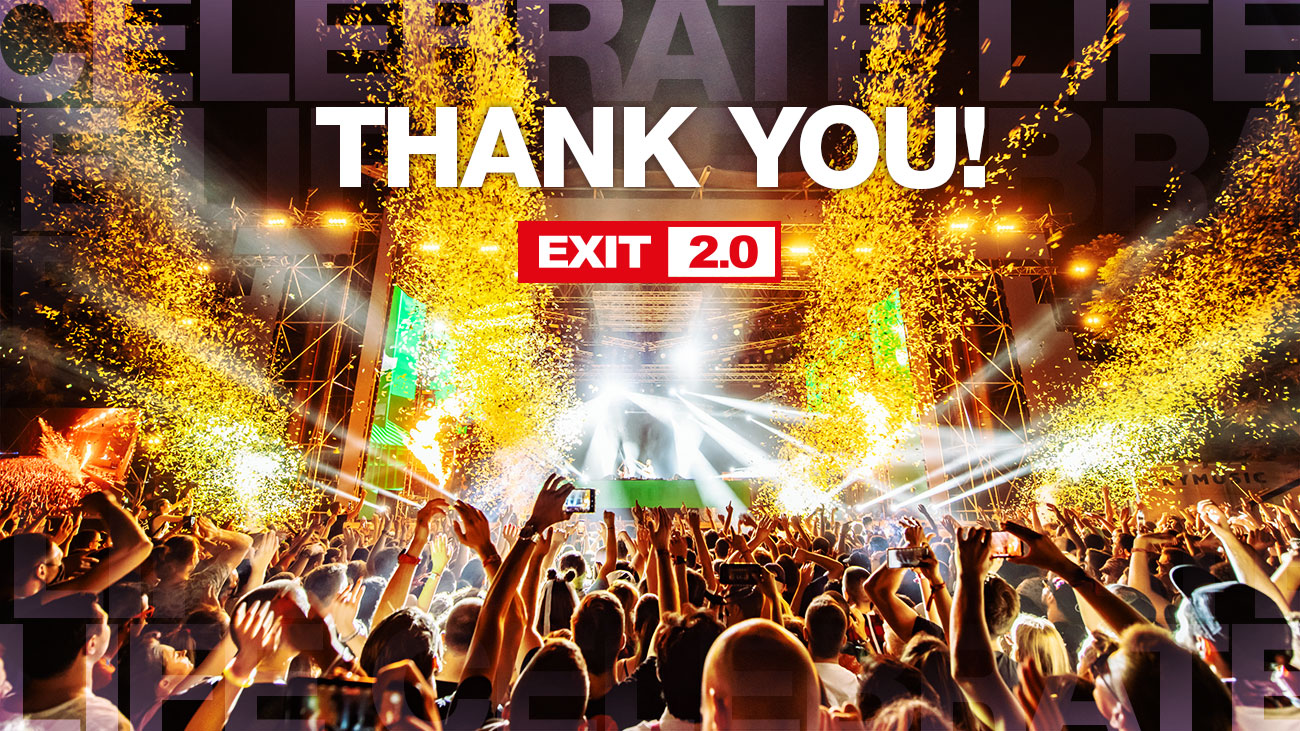 EXIT, being a multiple winner of the ‘Best European Major Festival’ award, also celebrated its 20th anniversary this year, as music fans reunited and danced together once again to celebrate life and the return to normality. Proving the huge need for events and a pent-up energy from music fans, all 4-day tickets were also sold out almost a week before the event started. In spite of the pandemic, EXIT’s crowd this year was as colorful as it gets, with over 50% of the 4-day ticket holders coming from abroad.

Many of the artists had their first major show at EXIT after almost 18 months of silence and according to tens of thousands of fans this accumulated energy resulted in some of the best performances of their whole career. Just like the first EXIT Festival 20 years ago was sign of return of normal life to the Balkans, this year’s edition once again proved the power this festival represents, but this time providing a best case on the global level.

“Magic that happened last 4 days on Fortress was out of this world. This year’s event was more than just a festival, it was a movement of people, ready to do whatever it takes to keep human connections at the forefront of our existence. Festivals are generally made to promote values worth living for and we are determined to prove that festivals can be organized safely even during the pandemic. That’s why we have worked tirelessly to create a best practice model on how to do it. Besides our own event, we also hope that EXIT will be an encouragement to all our international festival colleagues, the ‘Festival Family’, that it is possible for all of us.”

David Guetta, headlining day 4 of the festival, summarized all this by simply saying: “it’s the best place to be right now on the entire planet!”

EXIT’s brave effort for the chance to finally happen this year did pay off, but the organizers are also very thankful for the trust of the fans, who made these four days a miracle.

“A festival is only as strong as its fanbase and during these four days we gathered probably the most passionate festival fans in Europe and beyond! The ones that didn’t mind to come despite all uncertainties about cancellations and travelling, PCR tests and other obstacles. They felt the same super strong need we had all this time, a need for us to be together no matter what, united as one, by the power of music and life.” – Kovacevic added.

As also mentioned on EXIT’s social media platforms, the organizers were truly sorry that a few artists had to cancel at last minute, mainly due to pandemic-related reasons which also affected big sporting events like the Football European Championship and Wimbledon Tennis Championships.

“I’m personally very thankful for the star performers who stepped in last minute. They are our heroes and our friends forever! And once again, a gigantic thank you goes out to the EXIT fans who understood the situation and stood by our side all the way!” – Kovacevic added.

Besides programming the event, the biggest challenge of 2021 were the ever-changing regulations due to Covid 19. EXIT worked closely with the Serbian authorities and health organizations to create a protocol that was both acceptable legally and also realistic to follow for the fans. Visitors were allowed to enter the event either with proof of immunity (vaccination or antigens from a past infection), or a negative test (either before entering the country, or at the test zone set up by the festival). The “Safe Events Serbia” safety protocol, in accordance with the latest scientific research, was created to make summer festivals in Serbia the safest gathering places in the country. Early statistics show just that, with less than a dozen positive cases from approx. 14.000 tests done at the festival’s pre-entry test zone.

EXIT’s mainly about music and party, but not just that. The venue being an 17th century fortress in itself creates a visual environment that inspires both the fans and the artists.

The first day back at the Fortress was full of emotions. Amelie Lens plastered her Instagram with photos and videos, including posts like “So, this happened last night!!!!!!” Also on Instagram, Charlotte de Witte posted “This felt so, so good!”. DJ Snake also exclaimed “We are back!” during his Main Stage set and Roni Size, EXIT’s first international headliner, also posted about his new encounter with the Fortress saying – “20 years later we remain greater!”

On Friday, Swedish heavy metal band Sabaton brought their wild energy to the Main Stage and Paul Kalkbrenner’s performance at EXIT was his first after 18 months. His magical set was also recorded for his new video, as a diary of a return to normal life. “Turn on the lights, let me see the people; I miss people,” said also very emotional Amira Medunjanin from the Visa Fusion stage, wiping tears from her eyes.

On Saturday, Nina Kraviz produced a set of epic proportions. In the style of the biggest rock concerts, the audience chanted Nina’s name, as she returned to the stage for not one, not two, but three encores! On the Main Stage, festival visitors experienced a fantastic performance from Satori, presenting music from the album he recorded in Serbia. Other artists enchanting the audience on the main stage were Asaf Avidan, Robin Schulz and Paul Van Dyk, keeping the crowd dancing until 5:30 in the morning.

The final evening of this year’s EXIT was marked by amazing performances of two all-time greats. David Guetta’s Main Stage headline performance lived up to all expectations, as the French star laid down a memorable future rave set, infused with his biggest hits. The honor of closing the program on the mts Dance Arena and the entire festival went to Solomun with a massive five-hour set until 10am.