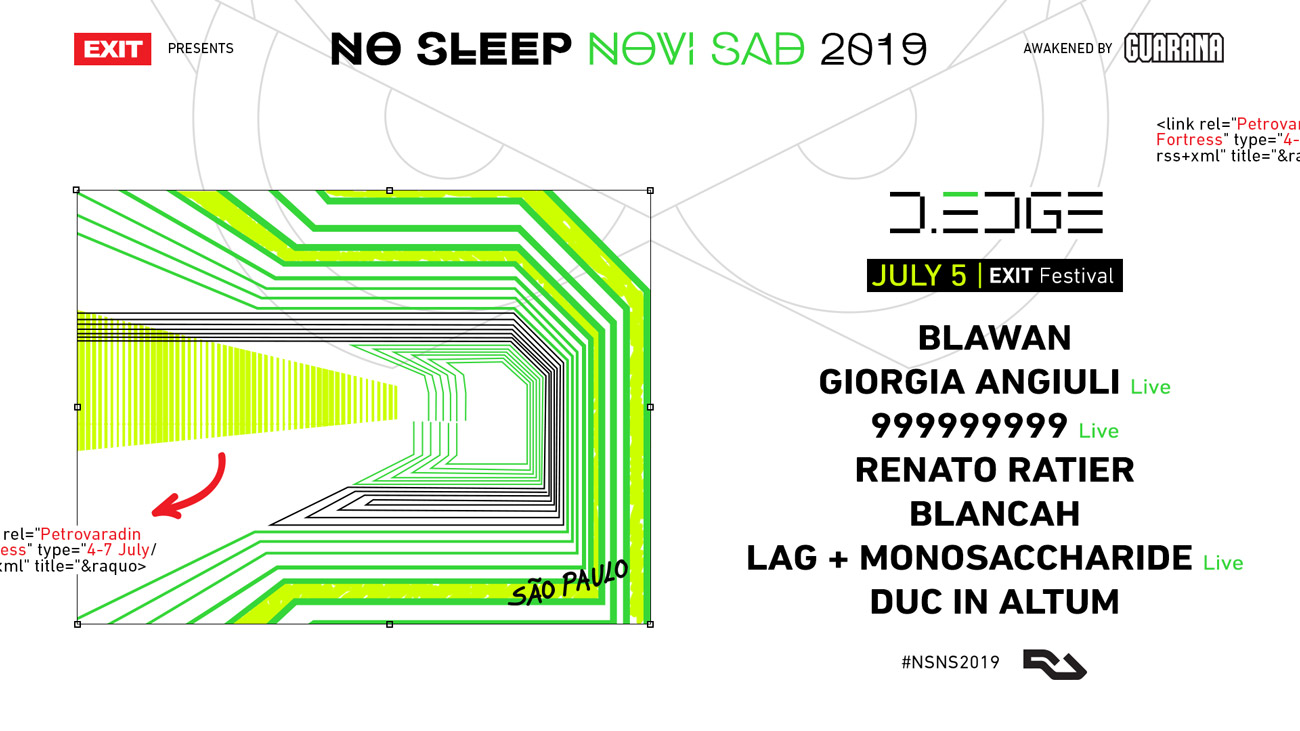 After EXIT held its first No Sleep Brazil party in Sao Paulo on March 30, in D-Edge, the most famous South American club, it’s time for the Brazilians to return the favor and conquer the Petrovaradin Fortress for one night, on Friday, July 5. Under the flag of this globally recognized Brazilian club which, since 2003, has been visited by over 20,000 visitors every week and which is, aside from its futuristic design, characterized by a great variety of music, the crew chosen for Novi Sad will start with house, switch to progressive, then to tech-house and acid, and finally it will turn to full-blooded techno!

Specially for this occasion, on Friday, July 5, #NSNS2019 will be visited by the furious British techno mage Blawan, the exquisite Italian musician Giorgia Angiuli, and her compatriots from currently one of the most sought-after electronic duos 999999999! In their conquest of the Petrovaradin Fortress, the club’s residents will be led by the founder of D-Edge, Renato Ratier, backed by South American heroine BLANCAh and Serbian-Brazilian duo Duc in Altum. One of the central slots will be taken by local performers and No Sleep residents, Lag and Monosaccharide, in their first joint “live” set!

One of the stars of the night will no doubt be Jamie Roberts, better known as Blawan, who has, using his talent and knowledge, become a maestro in his own techno universe during the past decade. His last year’s debut solo album “Wet Will Always Dry” was named the Best British Album by the renowned DJ Mag. With a handful of other pseudonyms, as well as his own label TERNESC through which he delivered analog productions and live sets to a craving audience, Blawan has cemented his position as the fresh face of pounding industrial techno.

A never before seen live performance at No Sleep Novi Sad will be given by Giorgia Angiuli, known for her eclectic approach to music. Educated in classical music as well as being a multi-instrumentalist, Angiuli is known worldwide for her craft in combining keyboard, other instruments, her voice, and, most interestingly, various children’s toys, with the final product being a vibrant and energetic sound! She successfully ended up the previous year by releasing the “No Body No Pain” EP, as well as her debut album “In a Pink Bubble” for the Stil vor Talent record label.

Another striking live techno performance is coming in an abstract packaging of 999999999 (Ninetimesnine), a duo who has become one of the most sought-after at the European and world scene in a short time, thanks to their raw, intense and improvised sound. This is confirmed by the fact that their first three releases for their eponymous label have been sold out in a matter of hours, just like their guest appearance at the special Planet Rhythm vinyl release named “303”!

For almost 20 years now, D-Edge has been an aspiration for reputable South American clubs. The “brain” behind this mega successful club is undoubtedly its owner and founder, Renato Ratier, who built himself a reputation as a key name of the international DJ scene and as Brazil’s prolific innovator on the electronic music scene. Ever the multitasker, Ratier proves his DJ knowledge with a mixture of influences such as Chicago house, electro rock, techno, disco and minimal, and his impressive biography also lists him as one of the partners and residents of the Brazilian Warung Beach club which is described by many as heavenly, making it to Mixmag’s list of the best clubs in the world!

There to accompany Ratier on Friday, July 5, will be BLANCAh, one of the residents of D-Edge club who, in her almost twenty-years-long career, left a mark with her melodic compositions with innovative and dark passages. Among other things, she marked the previous year with an original “Apneia” mix, released for the Timeless Moment label.

The strength of the local scene, as well as their live skill, will be demonstrated on EXIT Festival by the Novi Sad-based DJ and producer with an impressive rich international career, Lag, together with the Belgrade-based duo Monosaccharide, who never stop raising the bar with their beguiling techno sound, incorporating influences from various music genres.

The impressive lineup of the second day of EXIT festival will be completed by the D-Edge club residents, the duo Duc in Altum consisting of a married couple, Eric Frizzo Jonsson and Arjana Vrhovac Jonsson, born and raised in Serbia!

Don’t forget that EXIT’s favorite group offer is back: friends who buy four tickets together receive one ticket as a present! “4+1” offer will last until a very limited number of packages are sold out! EXIT tickets are available at exitfest.org, and for those who wish to bundle them with accommodation and local transfer, there are also packages starting at €135. Default accommodation is the festival camp located on the city beach, while hotels can be booked through EXIT’s official tourist agency at exittrip.org.