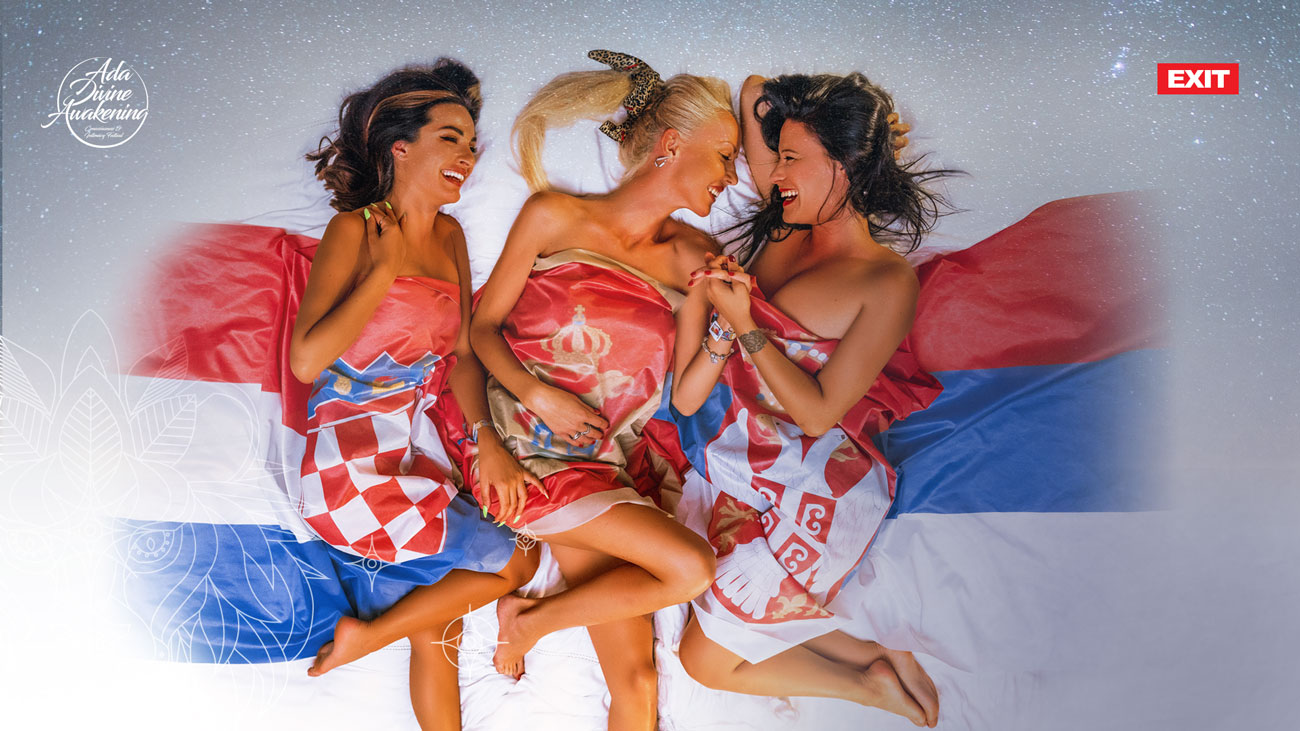 Aside from the festival itself, which for the first time after the war in the 1990s, gathered young people from all over former Yugoslavia in one place, EXIT has launched very successful festivals in Croatia, Montenegro and Bosnia and Herzegovina. This has built the most robust cultural and tourist bridges between these countries so far, thanks to which tens of thousands of young people had the opportunity to meet their peers from neighbouring countries, largely breaking the prejudices they were previously exposed to. Also, the EXIT Foundation has so far implemented a series of actions to strengthen the voices that call for normal coexistence and a healthy future for the region.

To this end, in anticipation of the Ada Divine Awakening Festival, the first festival of awareness and intimacy in the region, which will be held from 15th to 20th September on Ada Bojana, EXIT has launched a new initiative, which stresses the futility of any artificial divisions in and around us. Three women — the wife of EXIT’s founder, Ivana Kovačević, the founder of the Tantra Spirit Festival in Croatia and co-founder of the ADA festival Dolores Antić and aviation women’s rights lawyer and star of a new Netflix show Christina Panebianco Carmela, were photographed in bed covered by Serbian, Croatian and Montenegrin flags.

“The goal of the Ada Divine Awakening Festival is both to raise the awareness of people in the region and to empower women through liberation from centuries of guilt and subordination. In EXIT, I see a force that can genuinely support the healing of such an important issue”, said Dolores Antić on this occasion.

“Lasting peace in the Balkans has been Dušan’s vision since the founding of EXIT, which the new festival at Ada Bojana strongly supports. This photo shows that flags do not have to be just a specific symbol that separates us, but that the time has finally come when love and a sincere human relationship will be stronger than any divisions or borders”, Ivana Kovačević added.

“As a fighter for women’s rights in aviation, it was natural for me to support two great brave women from the Balkans in their mission of breaking artificial divisions among people”, concluded Christina Panebianco Carmela.

This photo introduces the activation of “EXIsT Proudly”, which brings together those who choose to live in the beauty of their authenticity, in the courage to get rid of prejudice and all the limitations caused by the historically woven concepts of shame and guilt.

Everyone is invited to share their story, photo or video on social networks by Sunday, 12th September, in which they show how they’ve broken down boundaries in and around themselves, consciously celebrating their intimacy, personal values and authenticity. By using #EXIsTproudly and #BrišemGranice and tagging @exitfestival, @ada_divine_awakening_fest and @seastarfestival, they can win tickets and accommodation packages for the upcoming Ada Divine Awakening, as well as tickets for EXIT and Sea Star festivals which will take place next year. However, the most important part is the opportunity to initiate long-term change in society.

The Ada Divine Awakening Festival points to the key problems in today’s world — growing loneliness, alienation, and conflicts in the essential connection with oneself and one’s partnerships. The first festival of awareness and intimacy in the region will be held from 15th to 20th September at Ada Bojana. Over 40 of the world’s leading experts and educators in the field of partnerships, sexuality and personal development, as well as famous musicians from the region and the world, will gather at one of the most beautiful destinations in Europe.

In the six amazing days, over 80 workshops will thematically cover the topics of increasing intimacy with yourself and your partner, enhancing your sexual experience, deepening your connection with your own body, balancing female and male energy, yoga classes, sunset meditations, ecstatic dance, concerts and performances that will push the boundaries of consciousness.

The ADA Festival will host some of the most influential educators and performers, such as Devi Mohan, Elaine Yonge, Daka, Ohad Pele, Andrea Paige, Rachel Rickards, Lennart Hening, Buddhi Dana, and many others. It will also include ecstatic dance sessions in the evening, while music, as the cosmic language, will be an integral part of the festival, with top global and regional performers such as Božo Vrećo, Aklea Neon, Joshua Swahe, Praful, Tuulia, Zazo.

Promo Package Prices for the ADA Festival for People From the Balkans!

EXIT has provided packages including tickets for the festival and five nights in the FKK Ada Bojana resort for visitors from the Balkan region at 369 euros, a discount of as much as 35%. This price will be valid until Sunday, 12th September, until the end of the day. The packages can be purchased on the Ada Divine Awakening website.