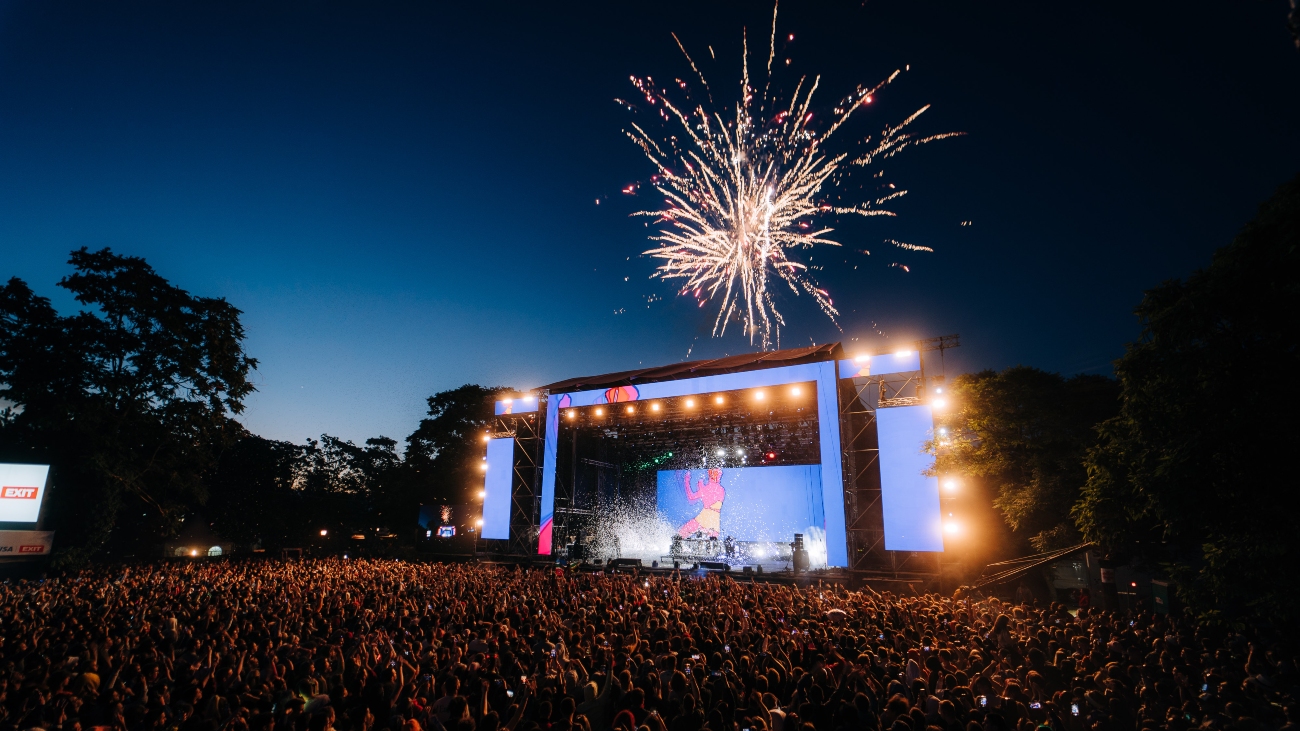 Calvin Harris, Nick Cave, Iggy Azalea, Boris Brejcha, Adam Beyer, ARTBAT, Maceo Plex, Satori, Monolink, The Exploited, Sepultura, Masked Wolf, Ofenbach, Disciples, Reinier Zonneveld, Sama’ Abulhadi and many others, first of all, expressed their immense gratitude to the festival and its audience. The word they most often used to describe their experience and the crowd was “energy.”

Alok says that “once you come to EXIT, it is impossible to go out as the same person“. “It’s very unique. I love the meaning behind the whole festival and how it came from, I got even more in love with it. So, congratulations, this is fantastic! This is a place for happy people. They’re enjoying life, enjoying the moment, the presence. I think that’s very important. To be together, here, now,” he pointed out.

Satori posted the following on his Instagram: “Do you know this moment between dreaming and waking up? You find it on the Dance Arena at EXIT Festival. “. One of the most memorable moments in his performance was his rework of the song “Djelem, Djelem“ by Esma Redžepova, which he released in collaboration with EXIT and its founder Dušan Kovačević.

In an interview with the EXIT team, Iggy Azalea said she “didn’t want her show to be over“ , and that although every performance is different, this one was special. “I’ve been doing this for such a long time and it’s hard to get shocked anymore, but this was a shocking new experience for me. I was shocked at how many people knew all the words. I was shocked by how many Australian flags and flags from different countries I saw in the crowd so it was very cool to see people from all over the world coming to Serbia for something so special like this,” she said.

The giants of this year’s EXIT, Nick Cave and Calvin Harris, let their performances speak for themselves and only said one big “Thank you!“ to the audience and the festival. Nick Cave even said his thanks in Serbian during his performance. A huge thank you also came from the band Sepultura. ZHU thanked the Main Stage crowd for staying up until 6 in the morning on the festival’s last day.

Disciples had very strong impressions after their performance. “I wanna come back here, every year. People don’t realize how amazing this festival is, one of the best festivals we’ve ever played at. So everyone should come to Serbia to experience it. Serbia is definitely the best crowd we’ve ever played to. Everyone had the same feeling, everyone was together, everyone was like showing love, to each other and to us,” the trio said.

Joel Corry said that he has known about EXIT for years and always wanted to perform. “But this was beyond my expectations. The stage was huge, the visuals were amazing. It was a very big production and the sound system is well, which is a most important thing to me. That was an incredible experience. The energy was just insane. From the minute I started the set to the end, it just got bigger and bigger and bigger,” he said.

Masked Wolf felt constant, tremendous energy from the moment he stepped onto the Main Stage until the very end of his performance. “Most probably like in the top two shows of Europe. Appreciative, energetic, mesmerizing,” are the words he used to describe EXIT.

Ana Đurić Konstrakta said she was glad that the moment came for “bands from Serbia to take the headliner slot“. “The whole crowd sang in unison; that rarely happens. That is what I experienced, and I’ll remember it. We are happy to receive this recognition and get the opportunity to perform on the main stages at three of EXIT’s festivals“, said Konstrakta.

ARTBAT, who had the honour to close the mts Dance Arena with their set this year, shared their excitement even before the performance: “We’re hyped and extremely excited to close one of the most prestigious and anticipated festivals today.“.

“No words can describe the EXIT feeling“, Boris Brejcha wrote on Instagram, and the feeling is shared by the audience who waited for his performance at mts Dance Arena until the early morning! Along with footage from his live performance, which earned him a massive round of applause, Monolink posted on Instagram: “Thank you, EXIT Festival, that was epic!“

During her performance at mts Dance Arena, Blond:ish even climbed onto the DJ counter, and she later summed up her impressions: “I’ve been dreaming of this day since I started DJing. I just saw this view of this amphitheatre and the crowd that is nothing like I have experienced before. This is proof dreams do come true for all you upcoming artists, this is the DREAM!“

Denis Sulta felt „owerwhelmed“ after his performance at mts Dance Arena, which he described as “something that you dream of”. “I’m just kind of blown away by the scale, the energy, and the kindness of everybody that I’ve met since I got here. So it was phenomenal,” he added.

Adam Beyer, who closed mts Dance Arena on the festival’s first day, thanked the ravers who stayed all morning, in the rain, with Enrico Sangiuliano and him, and added: “We went BANG at EXIT! “ Maceo Plex reminded fans of his song “Revision“, which he premiered last year, and right after this year’s performance, he asked his fans on Instagram: “See you next year? “

Reinier Zonneveld, who had his first encounter with EXIT and mts Dance Arena, said in an interview that his experience exceeded his expectations: “The Arena, the stage, the people, the vibe, and the sunrises, was a big honor to play here, I really enjoy it, super special. One of the best festivals in the world. ”

Sama’ Albulhadi, who performed on the No Sleep Novi Sad stage last year, and at the mts Dance Arena this year, says that she panicked before her performance because of the size of the stage and the number of people in the crowd. She had a B2B set with DJ ANNA and described the experience as “magical and so full of energy”. “The set-up of the Arena is like a mountain, you can see everyone, you can see the last person in the crowd. You can see his face. Everyone is here, standing in front of me, and dancing with me,” she said. ANNA was also delighted with the stage: “WHAT A VIEW! One of the most beautiful stages I played “, she wrote on Instagram.

The Exploited singer Walter David Buchan described the audience at the Explosive stage as “fantastic“. “Fantastic to be here and we’ve had a great time. For us it is a privilege to come back. Brilliant! Great festival, great people.” The Undertones have a similar opinion of this stage: “Just so unique, this is kinda surreal, you know, it’s just amazing,” they said.

Jax Jones told EXIT’s team in an interview that it was an “absolute pleasure” to perform at the festival again and that positive energy was the entire point of his set. “I gave that to the audience and the audience gave that to me. It was perfect harmony,” he said.

Ofenbach said that their performance was “crazy“: “„We’re really tired, you know, so it’s a good sign. It means that you gave me everything, we gave you everything. It was a good connection,” they said.

ACRAZE said he didn’t expect it to be “this crazy”. „The energy was completely incredible. Audience was great. Everyone was very connected,” he said.

Shouse, who experienced the Main Stage for the first time, said that the location was incredible. “We wish we could stay for a few more days. We wanna come back. It’s amazing. Positive Serbian energy,” this duo said.

Marky Ramone said a special thanks to the festival and the audience, Marc Greenway from the band Napalm Death pointed out the festival’s musical diversity, Gerd Janson said that No Sleep Novi Sad was one of the most impressive stages he has performed on so far, Mockakk says that EXIT is “one of the best festivals he played in his life, for sure,” Senidah singles out “people, crazy energy, and freedom“, Molchat Doma thanked all of Serbia, saying “those days were wonderful”, Blind Channel posted: “20k x thanks”.

Dax J described EXIT as “epic”. “I’ve grown with the festival. It has been an amazing journey and I love playing it, so it feels like home,” he said. Indira Paganotto, who closed the No Sleep Novi Sad stage, left the Fortress full of strong impressions. “Doing the closing set of EXIT Festival on No Sleep stage was one of the best experiences of my career!! We lived real magic!! What a sunrise, what a place what a festival team, What WARRIORS!“ she posted on Instagram.

Because of all this, we can hardly wait for the next year, 2023, when EXIT will take place from 6th to 9th July! Fans can register for the best tickets offer now! Fill out a short form, and you can get a chance to secure one of the first tickets for EXIT 2023.