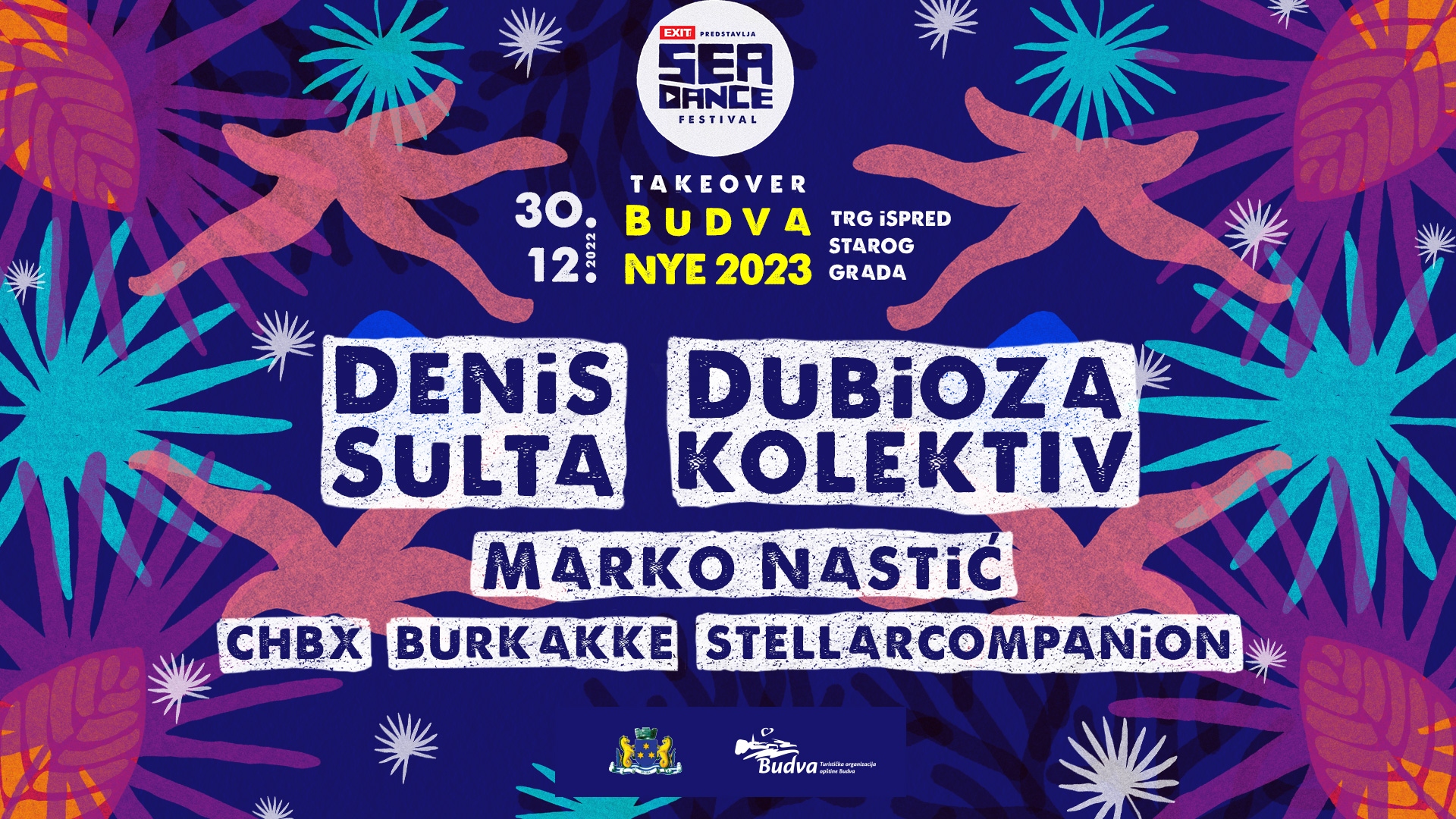 On Friday, 30th December, a grandiose stage in the square in front of the entrance to the Old Town will host the region’s leading band Dubioza Kolektiv, the internationally acclaimed electronic music wizard Denis Sulta, and prominent regional DJ Marko Nastić for a big Sea Dance Takeover. The beginning of the three-day NYE Budva 2023 event will serve as a warm-up for the new edition of the most famous Montenegrin festival, which is planned to take place at the end of August. An unprecedented number of visitors from all over the region is expected at the huge party; admission is free, while DJs Chbxx, Burkkake, and StellarCompanion will provide local support.

Dubioza Kolektiv, the region’s most thriving musical cosmopolitans, whose attitude has not changed since the beginning of their career despite the vast army of fans they’ve amassed on several continents, are coming to Budva again. After a fantastic performance at this year’s Sea Dance, the yellow and black band is preparing to set the crowd on fire again. Their music has been described as an original sound that is not ashamed of its roots, and their lyrics as a way out of a generational predicament. You will recognize the influences of punk, reggae, ska, and rock, in their original sound, and their energetic arrangements heat up the atmosphere at every performance, making the crowd bounce tirelessly to cult songs like  “Kažu,“ “Kokuz,“ “U.S.A.,“ and “Volio BiH,“ as well as more recent hits such as “Take my Job Away,“ “Space Song,“ or “Kafana.“

Denis Sulta has quickly established himself as one of the most exciting new acts on the ever-prolific Glaswegian scene. His unique sound is carefully created using dominant touches of melodic house, underground, and dance. He gained much of his musical education and knowledge through working at the internationally acclaimed record store Rubadub while simultaneously playing regular and permanent sets at the world-famous Sub Club and releasing records for influential labels such as Dixon Avenue Basement Jams, Numbers and his own Sulta Selects. Sulta is part of the BBC Radio 1 team, where she has a resident show alongside Jaida G, HAAi, Charlotte de Witte, and Saoirse. He toured the whole world with his Sulta Selects show, and this summer, he marked the second day of the EXIT festival with his incredible performance, the great party he threw, and his enviable DJ skills, for which he will be remembered for a long time among Dance Arena fans.

A veteran of the regional scene with a successful international career spanning more than twenty years, Marko Nastić likes to experiment and combine different genres and styles of electronic music, from techno and tribal techno to the fusion of house, minimal, tech house, and breakbeat. He founded the first Serbian techno publishing house, Recon Warriors, within which he later formed two more labels – Recon Light and Traffica. He is also behind the Easy Tiger publishing house and event series, as well as the Rakija label, and is part of projects such as TTP 2.0 with Dejan Milićević and Amnasty with Ana Ćurčin.

Chbxx and Burkkake, who fired up the crowd on the Together! Always stage at this year’s Sea Dance Festival, are preparing perfect send-off sets for the year behind us. They will be joined by StellarCompanion.

With its Sea Dance Takeover party, EXIT will close an extremely successful season in which it conquered the region with six of its festivals, and New Year’s Eve is an excellent chance for the last festival dance of 2022. The three-day New Year’s celebration at the Square will also feature Dino Merlin, Konstrakta, Gibonni, Senidah, and Sara Jo.