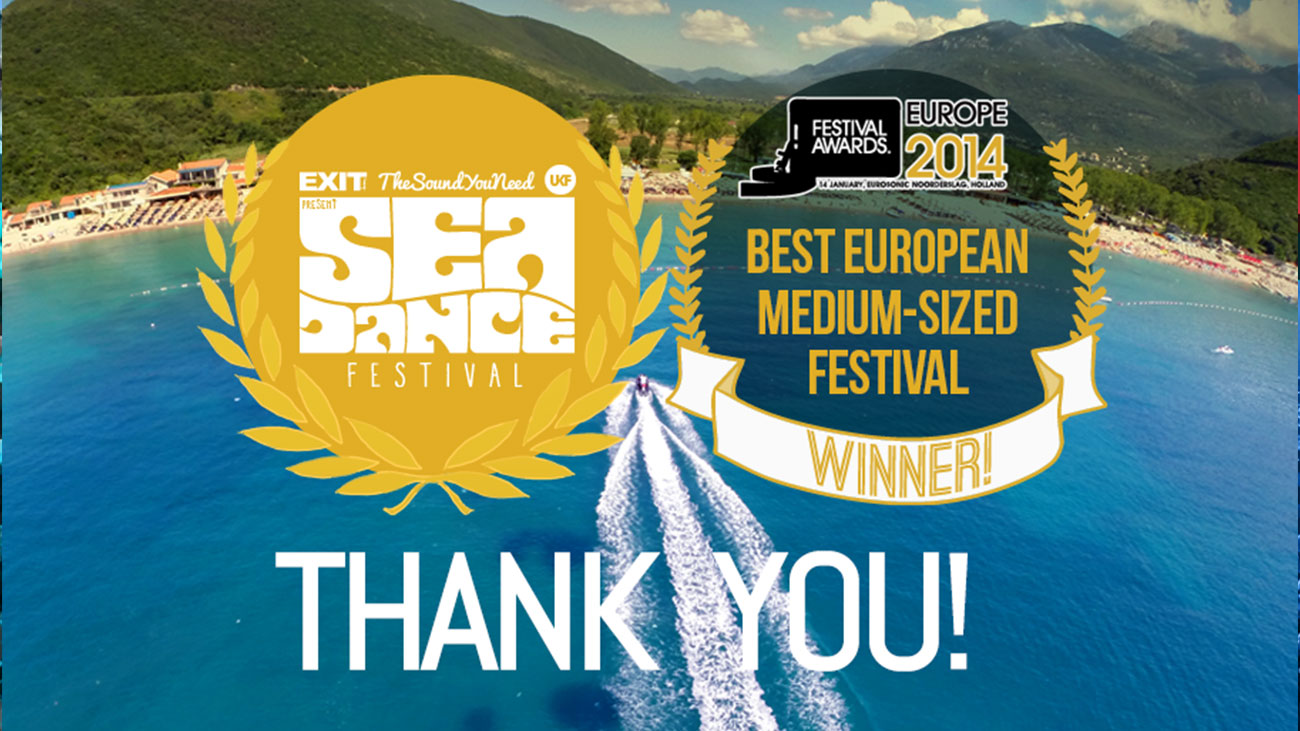 At this year’s European Festival Awards 2014 ceremony, the sea edition of EXIT Adventure, Sea Dance Festival in Budva has been named the Best European Medium-Sized Festival! Record setting 1,2 milion festival fans voted at the festival “oscars” together with press and music industry experts, and have named the winners of 12 main and 3 special categories at the ceremony last night in Groningen, Netherlands. Last year’s winner of the Best Major European Festival award was EXIT Festival, and it found its place in top 3 festivals in the same category this year! Competing with over 400 European music festivals, 12 finalists from 9 countries, EXIT has surpassed favorites, such as Germany’s Rock am Ring and Danish Roskilde.

The award was handed to the strategic director and co-founder of EXIT Festival, Dušan Kovačević, who took the opportunity to thank everyone who voted for the festivals at Petrovaradin Fortress and Jaz Beach: “After the award for EXIT in 2014 it feels incredible to receive this one for Sea Dance Festival, and goes to show that the EXIT Adventure concept has been well received by audiences all over the world. The unique concept at the world festival market presents two festivals as part of one grand Adventure. It’s a monumental and historic success because it’s the first time that a debut edition of a festival won an award of this magnitude. The new award is another testament to the efforts of the EXIT team to connect the region, so that Serbia and the entire Balkan region recognise the creative industries and tourism as true chances for the economic development and growth.”

Last year, EXIT and Sea Dance festivals had 260.000 visitors from more than 50 countries all over the world, and this year, thanks to new partnerships in Europe, an increase in visit by international guests is expected.

The European Festival Awards ceremony has been a part of the great European Eurosonic Noorderslag conference program, which is visited by over 3.200 delegates and representatives of 400 festivals in Europe every year, with performances of hundreds of future music stars at over 50 locations!

The EXIT Adventure begins at the Petrovaradin Fortress this summer on 9th July, and will last for ten days until 18th July at Jaz Beach, Montenegro. EXIT Festival celebrates its 15th anniversary, with confirmed headliners like Motorhead who will also celebrate their 40 year anniversary, as well as Adam Beyer who will be celebrating two decades of work at the world techno scene, at the Dance Arena.

Also confirmed are the popular California rockers Eagles of Death Metal, German techno legend Chris Liebing, Detroit techno tandem Octave One, and the local supergroup Škrtice led by Zoran Kostić from Partibrejkersi and Boris Mladenović from Jarboli, with countless other performers for over 30 festival stages at the Petrovaradin and Jaz to be announced soon!

Tickets for EXIT Festival are available at Exitfest.org. There are travel packages available for all those wishing to secure transport and acommodation to both festivals. See all available packages at Exittrip.org, the official tourist agency of EXIT Festival.